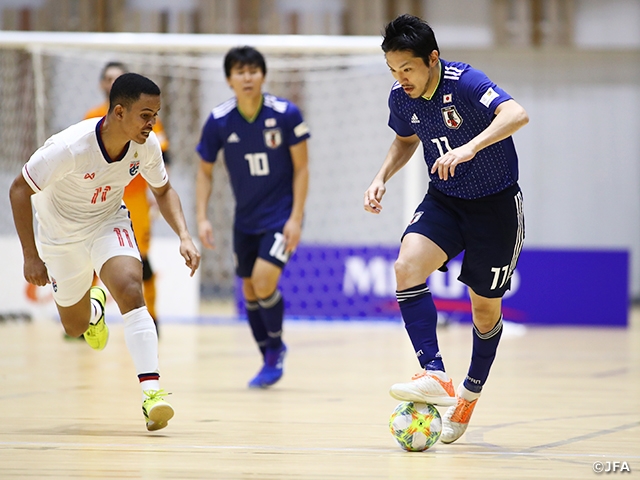 Coach Bruno GARCIA, who mentioned that he will be utilising all players on the roster for this match, elected to go with an experienced line-up of SEKIGUCHI Yushi, MINAMOTO Akira, YOSHIKAWA Tomoki, NIBUYA Kazuhiro, and HOSHI Shota to start the match. 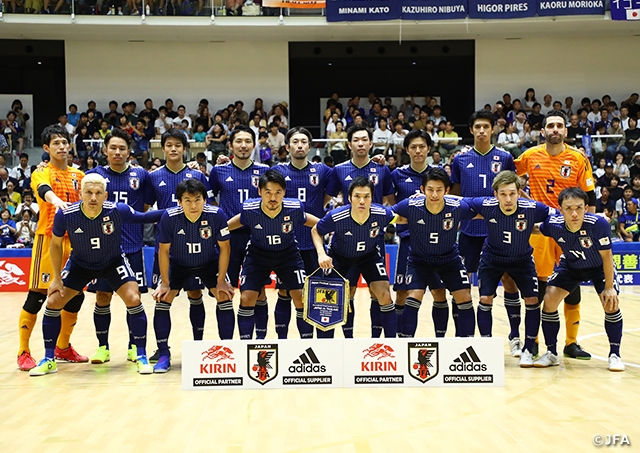 Despite starting the match with great intensity, Japan struggled to capitalise on their opportunities. On the other hand, Thailand kept their plays simple and utilised their speed to create chances. The opening goal was scored in the 11th minute, when Thailand’s Jirawat SORNWICHIAN struck a volley shot from a corner kick to take the lead.

Few moments later, Japan came within inches to level the match, but Yoshikawa’s shot was denied by the goal post. Conversely Thailand captured their second goal just before the end of the first half, as Suphawut THUEANKLANG converted a play from an indirect freekick.

In efforts to rally back, Japan started the second half by collecting the ball to MORIOKA Kaoru but struggled to create a goal scoring opportunity. Thailand showcased great defence, while anticipating for their chances to counterattack, but their opportunities were denied by the superb efforts made by the Japanese goalkeeper, PIRES Higor. 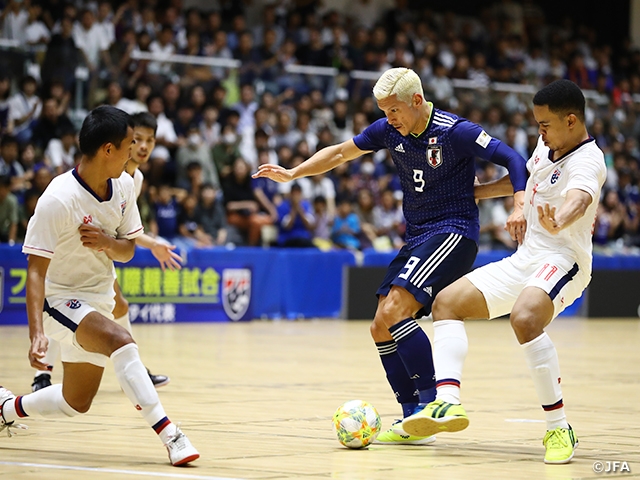 Thailand started to show signs of fatigue after the 30th minute mark, but Japan continued their struggle to find the back of the net, as KATO Minami’s shot taken in the 31st minute went off the cross bar.

With five minutes left on the clock, Japan initiated their power-play, with Nibuya wearing the goalkeeper jersey. However, despite the numerical advantage on the court, Japan couldn’t find ways to crack down the Thai defence, as time started to run out. Although Japan finally managed to score a goal, Kato’s goal came with just two seconds remaining on the clock, as Thailand took down the first match with a score of 2-1. The second match will take place at Takeda Teva Ocean Arena in Aichi, on Wednesday 25 September at 19:30.

Bruno GARCIA, Coach (Japan Futsal National Team)
We looked very stiff to start the match. We were welcomed by a very warm crowd, but that might have made us tense up a bit and we conceded two goals from set pieces. Although we managed to take control of the match in the second half, we weren’t able to capitalise on our opportunities. Simply put, Thailand did a great job to convert their chances in the first half, while we couldn’t take advantage of ours in the second half. Our opponent was much more efficient in that regards.

FP #5 MINAMOTO Akira (Tachikawa/Fuchu Athletic F.C.)
With our opponent starting off the match with great intensity, we weren’t able to adjust to them and struggled to find our rhythm. There were plenty of room for improvements in both offence and defence, but more than anything, we had to be more critical in front of the goal. We need to heighten the quality of our plays in offence to win matches like this.

FP #10 NIBUYA Kazuhiro (Vasagey Oita)
We wanted to showcase a dominating performance to earn a victory, but it turned out to be a disappointing match for us. Although we managed to create chances just the way we wanted, we weren’t able to capitalise on those opportunities. If we were more critical in those situations, the result would’ve been much different. I personally have to become more critical in front of the goal and help the team win the match by scoring goals.

FP #13 KATO Minami (Shriker Osaka)
We looked rattled to start the match and it wasn’t our usual performance. By the time I entered the match, it looked like we have regained our pace, but we still couldn’t convert our chances, so that is an aspect we must improve on. We were able to score a goal from a power-play that we have been working on, so that was great. We hope to showcase a winning game to our home crowd in our next match.

FP #14 NISHITANI Ryosuke (Nagoya Oceans)
With our opponent coming out with great intensity, we struggled to make the adjustments to them in the early minutes of the match. We were expected to take control of the game, but we weren’t able to do so. However, we did manage to find our rhythm as the match progressed, so if we could have capitalised on our given opportunities, this match could have turned out differently. Ahead of the second match, we will make the necessary adjustments on how we enter the match.

Jose Maria PAZOS MENDEZ, Coach (Thailand Futsal National Team)
Both teams showcased a wonderful performance in today’s match. This victory means a lot for Thailand, especially with the limited training sessions and long travel. We performed very well in the first half, as we managed to contain the Japanese offence effectively. We started to look tired in the second half, but we managed to hold on to our lead and win the match. In our next match, we will continue to showcase our character to fight against Japan.