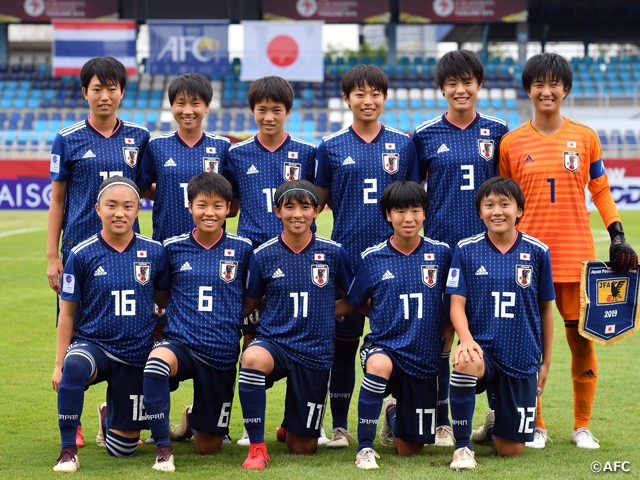 During their pre-match meeting, the players went over the team’s concept of, “giving your best efforts to win the ball, outrun the opponents, and to score goals.” The players then watched films of their previous matches to go over the team tactics and received detailed directions based on their positions.

The match started off with Japan taking the initiative but saw them struggle to convert their opportunities. The match would stay scoreless for nearly half an hour, but the deadlock was broken in the 28th minute, when OYAMA Aemu delivered a lobbing pass over the Thai defence line to allow HAMANO Maika to take the opposing goalkeeper one-on-one and score the opening goal. Japan’s second goal came just three minutes later, as NISHIO Hanon capitalised on the cross delivered by OGIKUBO Yuri in the 31st minute. Oyama and Hamano combined with each other to set up Nishio’s goal in the 33rd minute to give Japan a three goal lead. Japan continued to threaten the Thai goal in the remaining minutes of the first half, but fell short from scoring more goals, as the match entered halftime 3-0.

Hamano scored the first goal of the second half, as she converted the deflection of AMANO Suzu’s shot in the 49th minute. Second half substitute ASAKURA Kanako assisted the goal of TANNO Ririka in the 50th minute, followed by Oyama’s 61st minute goal. INOSE Yuko and Amano each added a goal apiece in the 71st minute and 86th minute respectively to make it 8-0 at the final whistle.

With Australia drawing 2-2 against Bangladesh on the same day, Japan finished as the group leaders with a record of two wins and one draw. The U-16 Japan Women's National Team will now face the runners-up of Group B at the semi-finals on Wednesday 25 September.

After the match, the team held a surprise party to celebrate the birthday of ASAYAMA Mahiro during dinner time. 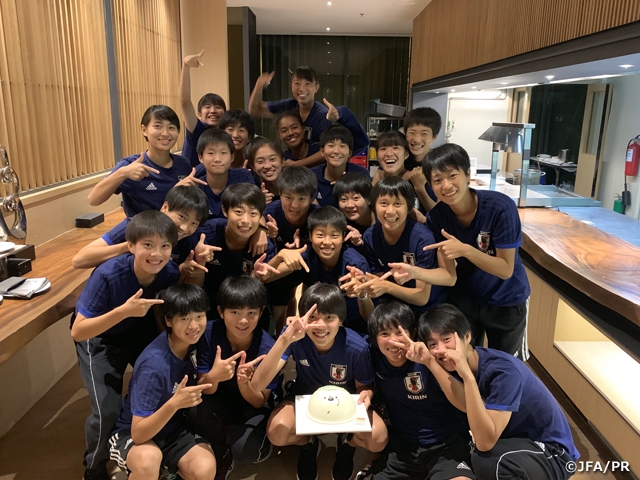 KANO Michihisa, Coach (Sagawa Shiga FC)
We planned on playing aggressively from the early minutes of the match. The players did well to keep their composure until we scored the opening goal. We faced some tough stretches during this match, but I am glad that we were able to score multiple goals to earn the victory. It was great to see our players keeping their composure, as they showed great understanding of the game flow to execute their plays. I have told my players to take risks in offence for this match. Our goal is to play a total of five matches at this competition and advancing through the group stage in first place was part of our goal. We will continue to work hard and prepare ourselves ahead of the semi-finals to achieve our ultimate goal.

DF #3 ISHIKAWA Rion (JFA Academy Fukushima)
We played our final match of the group stage with the group lead at stake and this was a crucial match for our route to winning the tournament title. We struggled to score goals in the early minutes of the match, but we managed to keep our composure and found our way to score goals as the match progressed. I personally was able to intercept the ball in many occasions, but failed to connect the passes afterwards, so I must do a better job in that aspect. It was great to see our players communicating with each other and staying on the same page to apply pressure as a team. We will face more intense competition from here on, and we will be given less opportunities to take shots, so we must heighten the quality of our plays at the final third. We will have an extra day to rest up compared to our opponent at the semi-finals, so we will make the most of the situation to prepare ourselves ahead of our next match.

MF #6 AMANO Suzu (INAC Kobe Leoncina)
Although we were able to create plenty of chances, we weren’t able to capitalise on those opportunities in the early minutes of the match. As we started to get a little frustrated, we managed to score the opening goal and it helped us gain momentum that carried throughout the match. I think the opening goal really allowed us to play with composure. It was great to see us execute the combination plays we have been working on in our trainings. In terms of defence, we have to do a better job to communicate with each other, as we saw in many occasions where we approached the ball without checking if the supporting players were ready or not. In our next match, we hope to show more aggression to start the match and take the initiative by scoring the opening goal. We will rest up and condition ourselves in the next three days.

FW #14 HAMANO Maika (Cerezo Osaka Sakai Girls)
After drawing our first match against Australia, we have been focusing on scoring goals in the following two matches. I was able to score the first goal just the way I wanted. The second goal came as a result of my anticipation to capitalise on the loose balls. I was able to get myself involved in many our team’s goals, but there were also many opportunities I wasn’t able to convert. The opening goal really helped the team regain confidence and composure, so I am happy that I was able to score that goal. We will prepare ourselves ahead of the next match so that we can score more goals from our combination plays.