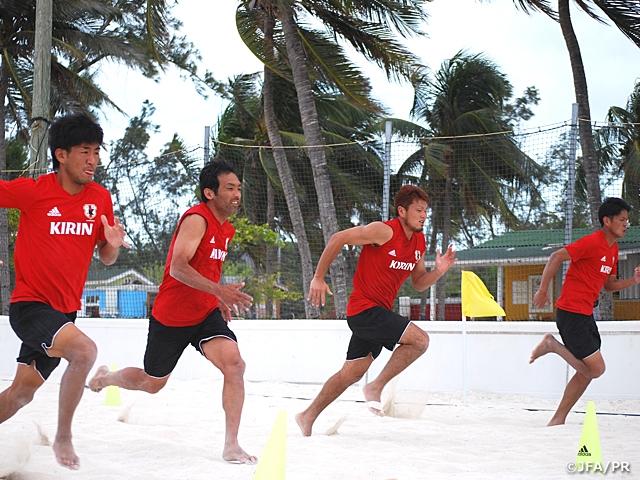 Japan Beach Soccer National Team held two-a-day practice sessions in the morning and in the afternoon on their second day of the preparation camp for the World Cup in the Bahamas on Wednesday 19 April.

In the morning practice, the team went through a series of physical exercises using resistance bands, and moved on to passing and controlling drills focusing on ball movement and handling techniques. It was followed by manager Marcelo MENDES coaching the team by participating as a goalkeeper in the 5-on-5 scrimmage as he demonstrated the passing techniques himself and clarified the team’s defensive and offensive tactics by actively communicating with the players.

In the afternoon, using practice cones separated with different length, the team went through a set of sprints with varying distance, followed by a variation placing the sticks between the cones to sprint diagonally and adding shooting exercises at the end of the run. Lastly, in the 5-on-5 scrimmage training, the emphasis was placed on ‘accurate execution of plays’ even after they were fatigued from going through an intense physical training, while they worked on the team tactics to share a common understanding among the players on the pitch.

The team will be holding two-a-day training in the morning and in the afternoon tomorrow, and are scheduled to have a practice match against Panama the day after tomorrow. 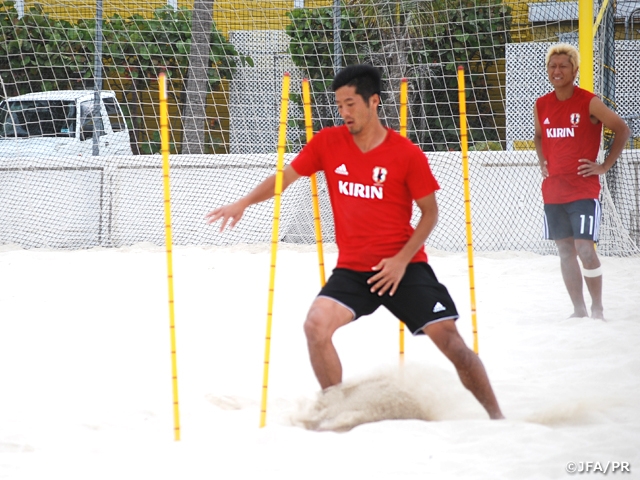 FP #4 YAMAUCHI Shusei (Ryukyu Erythrina)
Two days has already passed since arriving in the Bahamas, and I am gradually getting myself adjusted to the local time. We are far from being in top form, but by maintaining a high level of motivation, we are still having fruitful training by constantly thinking during practice and communicating with one another. We still have time until the opening match, but I also understand the importance of ‘doing small things right’. We cannot take anything for granted nor have any time to waste. We will make the best preparation possible by taking each practice seriously and believing that these small steps will be the key in accomplishing a major task.

FP #9 AKAGUMA Takuya (Dorsole Kitakyushu)
This was our third day since arriving in the Bahamas. We are getting used to the time difference and the local climate. I feel the intensity of training is increasing as well. In preparation for the Poland match, we focused our day on defence and shooting drills, at the same time went through a series of agility and physical exercises. As I understand, the match against Poland will be the key for the tournament, and we will make the best preparation possible to come up with a win. From the camp in Okinawa to this date, we are given plenty of time to prepare for the World Cup. I would like to thank all the support, and return the favor by working hard in the remaining time we have in training. 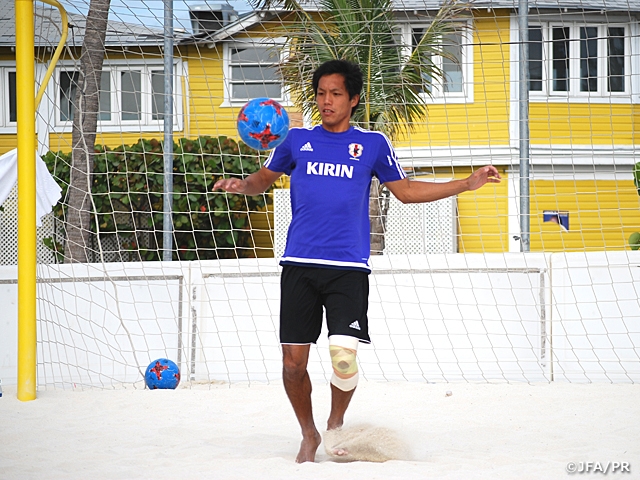