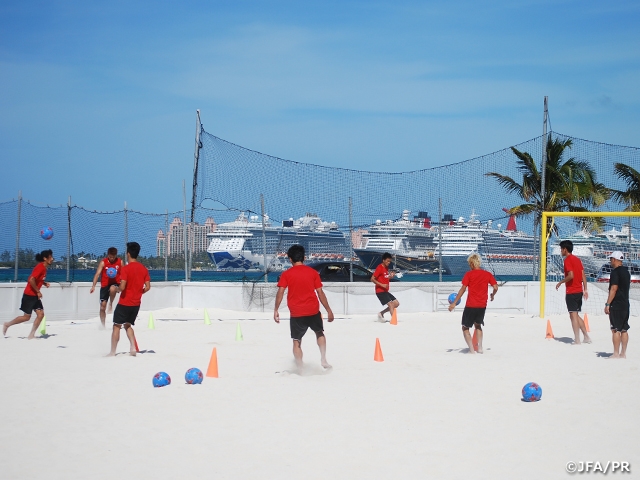 On Sunday 16 April, Japan Beach Soccer National Team edged a close contest over Germany in an international friendly match in Okinawa, and on the same night moved to a hotel near Narita Airport. On the following morning (Monday 17), they departed for the Bahamas to battle for the World Cup title. After nearly 20 hours of travelling time making transits at Dallas and Miami airports in the United States, the team arrived in the capital of the Bahamas, Nassau, in the evening on the same day and rested the remainder of the day at the hotel without any training to recover from the fatigue of the long travel.

On the next day (Tuesday 18), the national team went through two-a-day training sessions in the morning and in the afternoon. In the morning practice, the Japanese squad moved to a beach nearby their hotel and spent most of their time on recovery through stretching and jogging, and wrapping up the work-out with a foot volley game.

In the afternoon, after moving to a beach soccer field, the team held their first regular training session in the Bahamas. Pairing up with a teammate, each member of the squad went though passing and controlling drills, while they were getting a feel for the local sand and the ball to be used for the coming World Cup. Then, they moved on to a specialised ball-controlling to shooting exercise whereby the team starting from a goalkeeper throw would string passes in the air without letting the ball touch the ground until the field player took a shot. Lastly, every member of the team participated in a recreational intrasquad 6-on-6 game to wrap up the day’s training. During practice, the entire squad put up a good sweat despite having jet-lagged and fatigued from long journey. 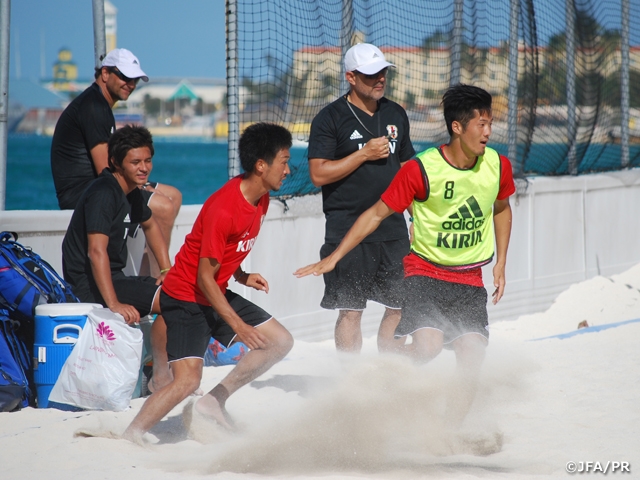 FP #10 MOREIRA Ozu (Tokyo Verdy BS)
After playing a pair of international friendly matches against Germany in Okinawa, we departed from Japan and arrived in the Bahamas. Today, we were able to recover from the fatigue after a series of training exercises in the morning and in the afternoon. I feel that the sand is deeper here in the Bahamas than Okinawa. We still have time until our opening match, and will be looking to use the remainder of time practicing and preparing for the World Cup, and getting used to the local sand.

FP #8 OBA Takaaki (Tokyo Verdy BS)
On the second day after arriving in the Bahamas, we had light training sessions in the morning and in the afternoon to adjust to the time difference and recover from the long travel. We also need to acclimatise ourselves to the local climate and conditions, while we get ready for the coming World Cup.

In preparation of the opening match against Poland, we had a pair of friendly matches against Germany and found several issues we need to address. We will work on those before the first match in training and make the necessary adjustments to improve the team. 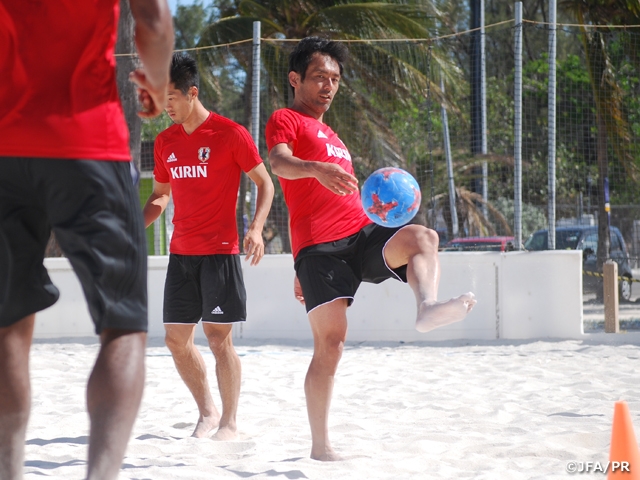