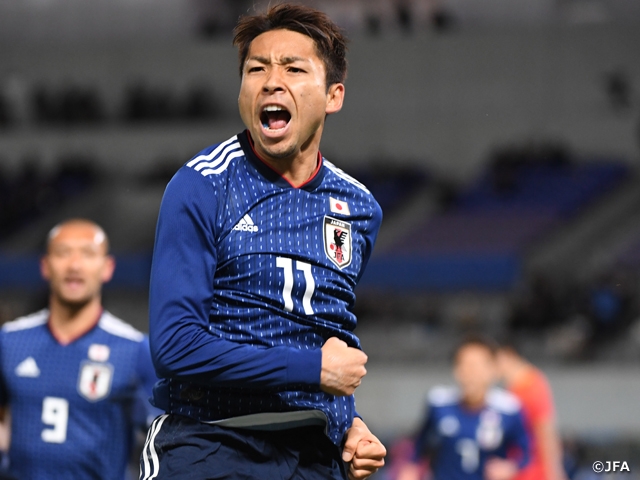 With this result, Japan retained their top spot with 6 points. Korea Republic gained 4 points with one win and one draw after beating DPR Korea 1-0 in the other fixture that was held on the same day. Japan will square off against second-placed Korea Republic in their final match and aim for the title for the first time in two competitions on Saturday 16 December. China PR have a single point with one draw and one defeat, while DPR Korea are yet to earn a point with two losses so far.

Japan changed seven starting players from the first match held on December 9. Except for midfielder KONNO Yasuyuki (Gamba Osaka) and Kobayashi, the team is comprised of new players with less than 10 caps for the national team, including 3 debutants, MIURA Genta (Gamba Osaka), YAMAMOTO Shuto (Kashima Antlers) and DOI Shoma (Kashima Antlers). Kobayashi being named in the Starting XI for the second consecutive match was positioned at centre forward, while UEDA Naomichi (Kashima Antlers), making his return to the team for the first time since January 2015, started as right back. 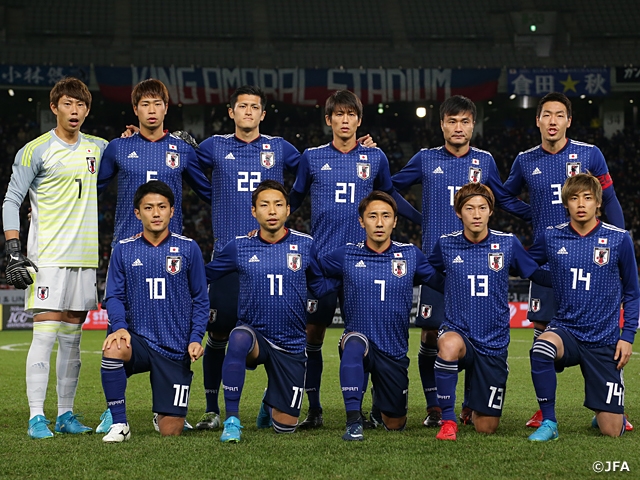 From the beginning of the match, Japan displayed excellent ball movement and moved up the pitch by exploiting the space behind the opposing defence with Doi, midfielder KURATA Shu (Gamba Osaka) and forward ITO Junya (Kashiwa Reysol) on the attacks.

In the 6th minute, Japan hit on the counter after collecting a clearance from an opponents’ corner, and Kobayashi attempted his first shot at goal. Furthermore, on 22 minutes, Ueda on the overlap sent a cross to Kobayashi, but his header blazed over the crossbar.

After 27 minutes, midfielder OHSHIMA Ryota (Kawasaki Frontale), who played for the first time since the opening match of the 2018 FIFA World Cup Russia Asian Qualifiers Final Round last September, injured his leg while he fired a shot from range. Subsequently, midfielder IDEGUCHI Yosuke (Gamba Osaka) was brought on in the 30th minute to replace the injured Kawasaki midfielder. The substitution had slowed down the pace of Japanese attacks, but still had a decent chance to score on 44 minutes. Kobayashi met Doi’s left cross with a diving header, but once again was unable to hit the Chinese net.

China PR, on the other hand, replaced 5 players including their goalkeeper from the match against Korea Republic and employed a three-back system. Occasionally, they sent long balls from the backline to their forward players, but the Japanese defence led by the Shoji did not allow the Chinese counterparts to create good scoring chances in the first half.

After the halftime break, China fashioned few promising attacks and threatened the Japanese goal. In the 57th minute, forward YU Dabao received a pass from substitute forward ZHANG Wenzhao and struck from short range, but Japanese goalkeeper HIGASHIGUCHI Masaaki (Gamba Osaka) made a fine save and protect the goal. Right after this play, WEI Shihao reacted to the right cross, but his effort went over the crossbar.

Japan in control of the match orchestrated several promising chances just past the hour mark. Ideguchi got to loose ball and fired a lobbed shot from 22 yards out in the 63rd minute and Ueda delivered a sharp cross to the front of the goal two minutes later, but still they were unable to find the back of Chinese net.

Japan in their attempt to break the deadlock brought on two new players onto the pitch and subbed in forward KAWAMATA Kengo (Jubilo Iwata) for Ito, while Kobayashi moved to the right-wing position, in the 75th minute and forward ABE Hiroyuki for Doi on 82 minutes. Right after the second substitution, the Samurai squad finally carved open the tenacious Chinese defence and scored an opener.

In the 84th minute, Kawamata was played through by Kurata and struck a shot at goal after evading the challenge of the surrounding defenders. Kobayashi attempted to tap in the deflection and his initial effort was blocked by the opposing goalkeeper, but quickly collected the loose ball and made no mistake to score the second time around. Kobayashi, the leading scorer of the J.League, directed in a tight-angled shot from the right side of goalpost with his left foot and scored his first goal for the national team to give a much-awaited opener for the Japanese side.

Four minutes later, Shoji picked up a clearance near the centre circle and cannoned a dazzling shot from 40 metres away from the opponents’ goal. His right-footed effort made a breathtaking arch and dipped past the goalkeeper and into the Chinese net, and stunned the 17,220 spectators inside the stadium. 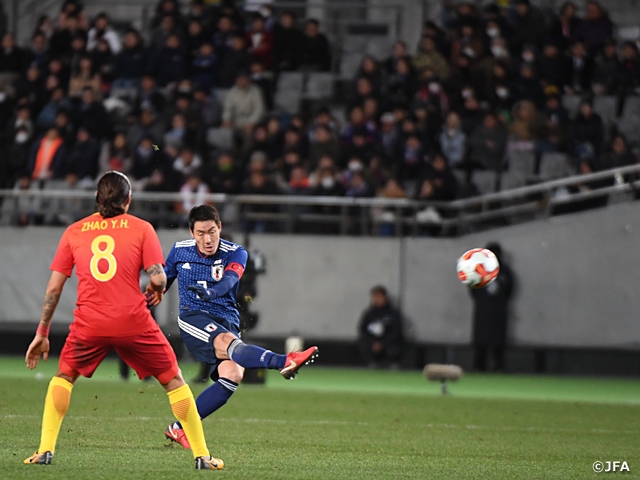 China PR displayed their competitive spirit until the end of the match and earned a penalty after Zhang cut in from the right side and moved inside the penalty box, and was illegally taken down by defender Yamamoto. Yu successfully converted from the spot, but there was no time remaining for the Chinese team to aim for an equaliser. The match ended with a final score of 2-1 in favour of the Samurai squad.

After the second round of matches, Japan became the only team to secure two consecutive wins and will clinch the title of the championship with a draw or a win in the final match against Korea Republic on Saturday 16 December.

Vahid HALILHODZIC, Coach of SAMURAI BLUE (Japan National Team)
We performed wonderfully and it was a fantastic win as well. We had few minutes in the second half where we did not play well and gave away two scoring chances to our opponents, but aside from that short duration of time, the quality of our plays was first-rate and displayed excellent football. We coordinated our plays well and took up the ball, and created several promising chances in the first half. It is regrettable that we gave away a penalty with an unnecessary foul towards the end of the game and Ohshima got injured and had to leave the team. Having said that, I must praise my players for an excellent overall performance today.

Shoji made an amazing goal. In fact, I kept encouraging my players to take a shot even from 22 to 35 yards out. Kobayashi had a wonderful season and had improved his ability to score goals. In the match today, he attacked aggressively and, while he had attempted to exploit the space behind the backline, he put strong pressure on the opponents as well. He had also displayed his strong physicality and did not shy away from any physical contact from his opponents. Furthermore, he had proven that he could play both as a centre forward and a winger. I must say that he is a prime candidate for the final squad of the World Cup.

I started Ueda as one of the fullbacks considering about how China might play their set pieces. I saw some hesitation in our plays in the first match, and advised my players to encourage each other more positively by saying, ‘We will play our football by making good use of the strengths of iour ndividual players.’ Same instructions of making quick plays to find open space by behind the defenders were given to the players, but unlike the first match I saw a completely different game. They have displayed much better football and I am glad that they had followed my instructions and showcased them on the pitch. I must thank my players for their great performance and their hard work as well. I am satisfied with not only our overall performance but also our game plan. I have to say that there are few candidates that I am eyeing for the top national team as well. I saw what I wanted to see in the game today.

DF #21 YAMAMOTO Shuto (Kashima Antlers)
We knew before the game that they would try to take advantage of their height and I was thinking that we won’t let them beat us in aerial battles. We did well in the crucial moments of the game. I made an unnecessary foul towards the end of the game and that is one area that I need to improve on. Having a chance to play an entire match meant a lot to me as well.

FW #11 KOBAYASHI Yu (Kawasaki Frontale)
I did not have a clear view of the goal, but I just struck it considering the locations of the ball, myself and the goal. I am relieved that I could finally score a goal today. Despite being the sole forward, I played comfortably with excellent and skilful players just behind me. I appreciate my coach for entrusting me with the position.

FW #13 DOI Shoma (Kashima Antlers)
I was thinking about playing without feeling any pressure. I combined well with my teammates and am sure that the Chinese players had a hard time defending against us. Those efforts did not result in a goal, but we still managed to create quite a few excellent chances.

Marcello LIPPI, Coach (China PR National Team)
It was a very difficult match. We had good control of the match for the first 15 minutes, but could take advantage of our chances, whereas Japan capitalised on them and scored. We will continue to strengthen the team for the 2019 AFC Asian Cup and the 2022 FIFA World Cup.