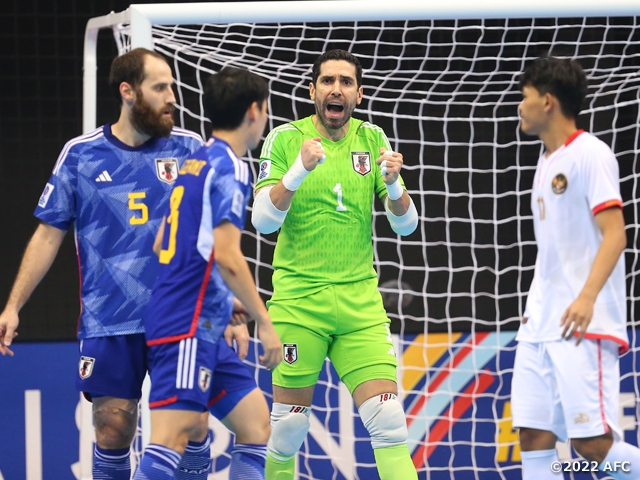 After battling through a tough group stage to reach their 16th consecutive appearance in the knockout stage, Japan faced Indonesia, who have shown great form to reach the quarterfinals for the first time. 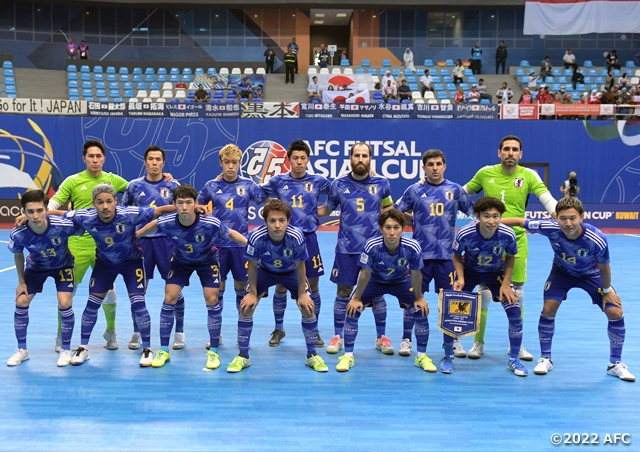 Despite their dominance in the group stage, where they recorded nearly 50 shots per match, Japan conceded close opportunities to Indonesia from the outset. In the second minute, Samuel EKO responded to a long feed delivered by the goalkeeper to strike a header that deflected off the goal post.

Although Japan took control of the game leading up to the 10th minute, Indonesia continued to threaten the Japanese goal, as seen in the 13th minute, when they broke down the left side to fire a shot, but Yoshikawa was there to make the block in front of the goal. ISHIDA Kentaro made a great defensive effort to deny the Indonesian side from capitalising on a counterattack in the 17th minute.

Following a scoreless first period, Indonesia opened the second period with a goal scored by Eko in the 21st minute. Despite conceding the opening goal, Japan gradually picked up their pace from this point, as KANAZAWA Sora later reflected, “We still had plenty of time, so we weren’t worried at all. Personally, it allowed me to be more committed towards the game.”

Japan struggled to convert their chances, but the equaliser came in the 31st minute, when HARADA Kokoro made an attempt to penetrate the right side. Although his attempt was denied by the defender, Kanazawa followed up to respond to the deflection, firing a shot that found the back of the net. Immediately afterwards, Japan applied aggressive pressure from the restart, inducing a mistake made by the opponent, allowing Mizutani to convert the loose ball into the net, as the lefty later commented, “I knew I had to score there.” 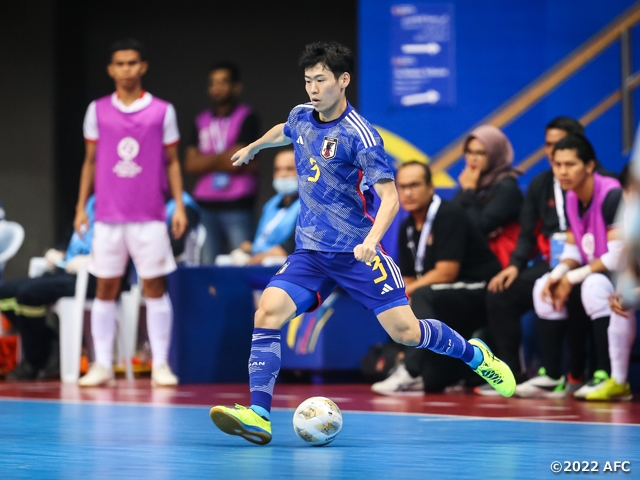 With five minutes left on the clock, Indonesia initiated their powerplay. In the 35th minute, the crowd applauded the Indonesian side for stopping the play in the midst of their attack, when they saw Japan’s Ishida laying on the court with an apparent injury. A few minutes later, Japan denied the opposing attack to setup the goal of Pires, who converted a punt kick into the open goal.

Indonesia rallied in the closing minute, scoring a goal from a corner kick, before launching one last counterattack to send the ball into the Japanese net, but the apparent equaliser was not allowed as it was scored after the final buzzer.

Barely but surely, Japan won the match 3-2 to advance to their second straight semi-finals, where they will face Uzbekistan, who defeated the host country Kuwait, at the semi-finals on Thursday 6 October. 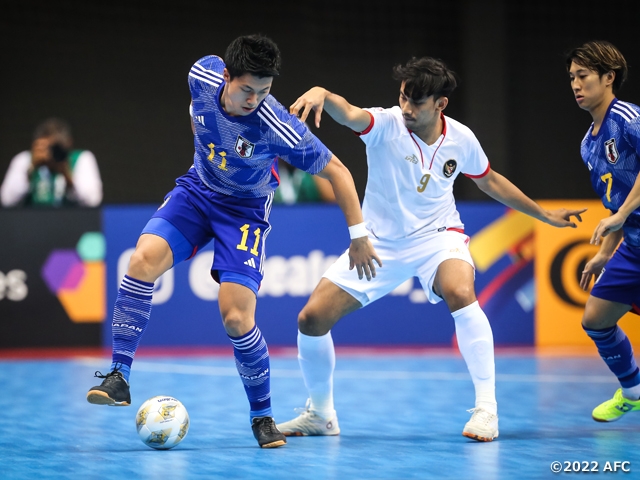 KOGURE Kenichiro, Head Coach (Japan Futsal National Team)
There are no easy matches at the knockout stage of the Asian Cup. There are matches that end with a large margin, but there is no doubt that each match has its own challenges. In this match, we struggled to score and conceded the opener to our opponents. However, the players showed how much they have grown over the short period of time to earn this victory. The team has proved that they are on the right track to win the title.

TAKAHASHI Kensuke, Assistant Coach (Japan Futsal National Team)
I was supposed to lead the Indonesian side at the 2020 Asian Cup, so I have a mixed feeling. Indonesia were simply a good team and considering that they were missing four or five of their core players, they have the potential of becoming one of the strongest teams in Asia. I shared everything I knew to support the players, and it became a match that I will never forget.

GK #1 PIRES Higor (Bardral Urayasu)
Indonesia played at a very high level, making it a very difficult match for us. Although we conceded the opening goal, we remained focused and believed in ourselves that we can come from behind. Each and every player did there job, while we also worked well as a team. I am very happy with this victory and for the time being, I will enjoy this moment before going on to the semi-finals. I am also delighted with my first international goal, but the team victory is what matters the most.

FP #3 MIZUTANI Soma (Nagoya Oceans)
I was devastated when we conceded the opening goal from my mistake, but it made me more committed to score a goal. I knew I would have a chance and I was determined to redeem myself by scoring a goal. I knew the ball would be deflected when Yoshikawa applied the pressure, so I was able to respond quickly. I am still distraught from my mistake, but I will try to make the most of this experience to help the team win the next match.