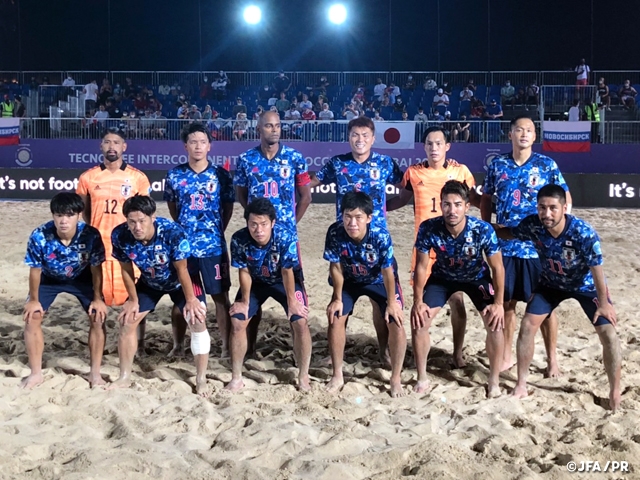 On Tuesday 2 November, the Intercontinental Beach Soccer Cup Dubai 2021 kicked off in Dubai, UAE. In this tournament competed by eight countries, Japan played against Russia in the first group stage match of Group 2.

Japan started the match by applying aggressive pressure from the frontline and chasing down the opponent’s back passes to the goalkeeper. However, Russia took advantage of their aggression to exploit the open space behind them, scoring back to back goals in the third minute. Although Japan managed to score back a goal in the fourth minute, when OKUYAMA Masanori (Loewe Yokohama) converted a PK, they struggled to possess the ball against Russia and ended up conceding another goal in the fifth minute to end the first period trailing 1-3.

In the second period, Japan started to utilise the width of the field to possess the ball, which led to the goal scored by YAMAUCHI Shusei (Tokyo Verdy BS) in the fifth minute. After conceding a goal to Russia, Okuyama and Yamauchi scored back to back goals in the 10th and 11th minute respectively to equalise the match before the third period.

The goal scored by MOREIRA Ozu (Tokyo Verdy BS) at the beginning of the third period gave Japan their first lead of the match, but Russia responded by scoring consecutive goals to retake the lead. Although Japan was able to send the match into extra time with Moreira’s equaliser, Russia took advantage of the mistake made by Japan to score the decisive goal, handing Japan a 6-7 loss to start tournament.

Japan will need to learn from their mistakes and try to be more critical in the final third when they face their AFC rival, Iran, in their next group stage match.

FP #11 OKUYAMA Masanori (Loewe Yokohama)
Although we were able to finish second in the FIFA Beach Soccer World Cup Russia 2021™, we have not seen many changes to our environment, which makes me feel that we still need to strive for higher results and continue to promote the sport. This Intercontinental Cup provides us with a difficult task, as the team is aiming to win the title, while also building a new team for the next World Cup. Although we fell short from beating Russia, we will continue to give our best efforts in the remaining matches to showcase strong performances to our supporters.

FP #14 UESATO Takumi (Tokyo Verdy BS)
To be honest, this is a very disappointing result. After losing to Russia at the World Cup, we entered this match with strong determination to win against them this time. However, we struggled to find our rhythm and conceded the lead in the early goings. Although we managed to pick up the pace and take the lead, thanks to the precise directions given by our bench, we allowed our opponent to come from behind and take away the match. It is very disappointing, but we just need to reset our minds and prepare ourselves for our next match. We must not forget to thank the association and all the people who has made it possible for us to participate in this tournament. As a player, we must think about the meanings to wear this jersey and play with a sense of gratitude towards all of the people who has supported us. We thank you for you continued support.