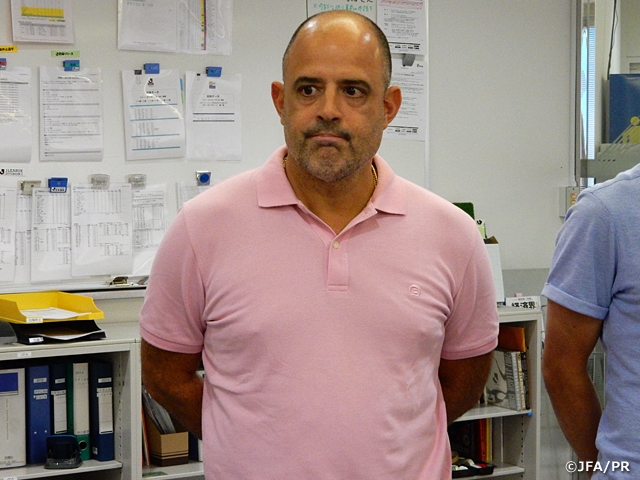 The Japan Football Association announces that Japan National Beach Soccer Team’s coach Marcelo MENDES will not renew his current contract when it expires at the end of August.

First, I would like to thank former JFA President DAINI who invited me (to Japan) and supported me very warmly, President TASHIMA who greatly supported us in this past AFC Championship and the World Cup, staff in the association, team staff, players and all others who have worked with me. It’s sad, but we all have to move forward. Japanese beach soccer have to keep developing even further and so do I personally. I want to keep supporting Japanese beach soccer. (On the most impressive event during his coaching tenure) The Asian Beach Games last year and the championship we won in Thailand this year were some of the positive things I remember. Another thing with a big impact I remember is that we played in two World Cups. I think I will remember that for long. The positive changes were possible not just because of what I did but also thanks to the cooperation by many people.

I think rebuilding of the national team, which I was order to carry out when I arrived in Japan first, was started and achieved as much as we could. We also traveled around in the country for clinics where we interacted with kids, women, elite athletes and casual players, and I think that gradually helped the promotion of beach soccer. But I think those are just starting points and there will be more projects to be carried out to promote beach soccer. Unfortunately I won’t be able to be a part of it, but from my perspective, the journey hasn’t reached even the halfway to the goal yet. I believe the JFA is also aware of it and there is no question that those projects will keep evolving. I am hopeful for that.