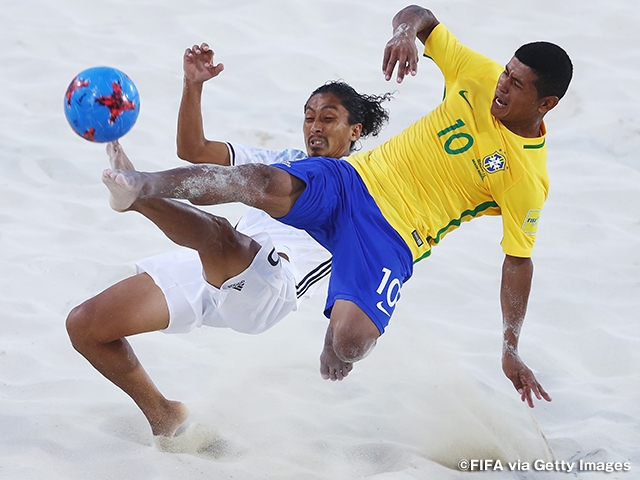 It was the important match to determine if Japan can go through to the next stage. Japan faced Brazil. If Japan could beat Brazil, they could guarantee their second place in the group and move on to the next stage.

While 2,000 people came to watch the last match of the group stage, Japanese players entered the pitch –they all looked very uplifted prior to the match. In the 5th minute of the first period, Brazil started a speedy offence from the left wing and Japan tried to clear the ball to the centre, but it became Japan’s own goal. 1 minute after the opening goal, RODRIGO scored the second goal from a free-kick. In the 10th minute, Japan scored an awaited goal; HARAGUCHI Shotaro passed the ball to GOTO Takasuke and he took an over-head shot. Then OBA Takaaki hit the cleared ball back to Brazil’s goal. 2 minutes later, Goto scored their second goal after getting a free-kick caused by a foul. Japan could equalise within the first period.

Both teams began the second period from the even score. With loud cheering from Japanese supporters, Japan allowed Brazil to move the ball around well and conceded another goal by Rodrigo to make it 2-3. After 3 minutes, a Brazilian player smashed a strong pass and MAURICINHO made a successful finishing touch to make it 2-4. Brazil scored another goal 1 minute after through their brilliant combination play. In the 22nd minute, Japan’s Oba made a long ball to the front, and Brazil tried to clear it – this turned to be an own goal to be 3-5. Japan could not score even though they could make some chances and allowed Brazil’s counter-attack instead. The second period ended 3-6. 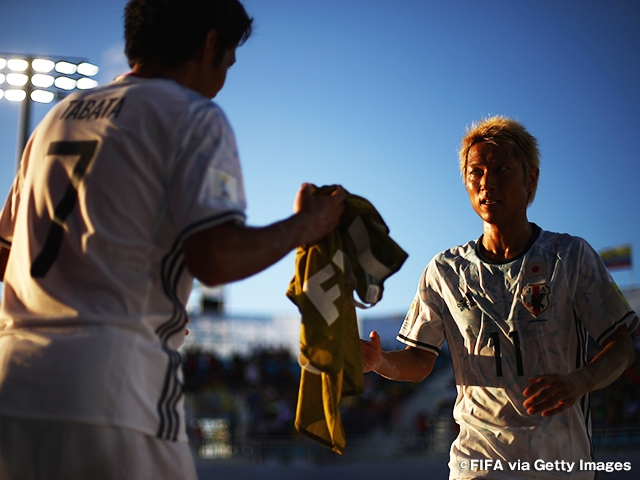 Unfortunately, Japan could not break through to the next stage. They will start their activities again for the next World Cup which will be held in two years. 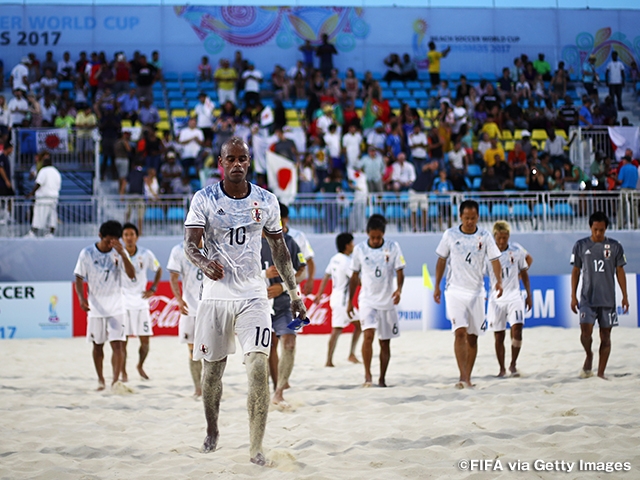 FP #10 MOREIRA Ozu (Tokyo Verdy BS)
We believed in getting the victory until the end, but the gap became bigger and bigger. In fact, our World Cup was already ended in the previous match against Tahiti. This match is not the end. If we had won the previous match, we would have been OK even if we lost this one against Brazil. It’s too regrettable for me to find any words right now, considering all the effort and work for beach soccer to gain the number of fans. I’m feeling embarrassed to go back to Japan with such a result. We have to practice more and each player has to make even more effort. I also regret that I could not score any goal throughout the past three matches. The only thing I have to do is to apologize. Before the end of my career as a player, I really want to make a good result. When we go back to Japan, the only thing I should do is thinking about the next World Cup.

GK #1 TERUKINA Shingo (Ryukyu Erythrina)
Brazil continued to attack us whereas we were mostly passive throughout the match. Each of us have to be more capable in offence. We could keep up in the first period. Even though we began the second and third periods with the same mentality as the first period, Brazilian players’ got more and more rhythm and I felt that we were pushed by them. It is impossible to face them well unless we can keep consistency without any fear. When we move the ball to an easier spot because of fear, that makes them even more aggressive, hence we had to be more ambitious. This experience made me understand again that we have more to do.