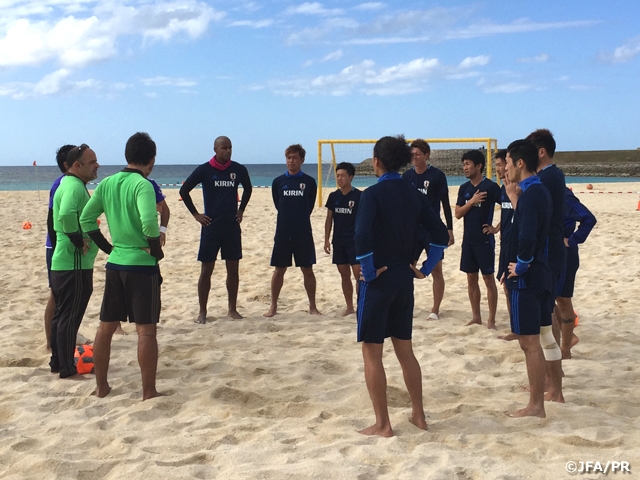 Sunday 18 December saw the final day of the Okinawa camp where the Japan Beach Soccer National Team short-listed squad had two-a-day training sessions in the morning and afternoon.

In the morning, after warming up, the team spent most of their time going through different offensive schemes to create variations in attacks. However, they could not execute these plays well in the beginning. But gradually, as they got used to them, the execution improved significantly and there were times where we could observe goals from good combination plays. 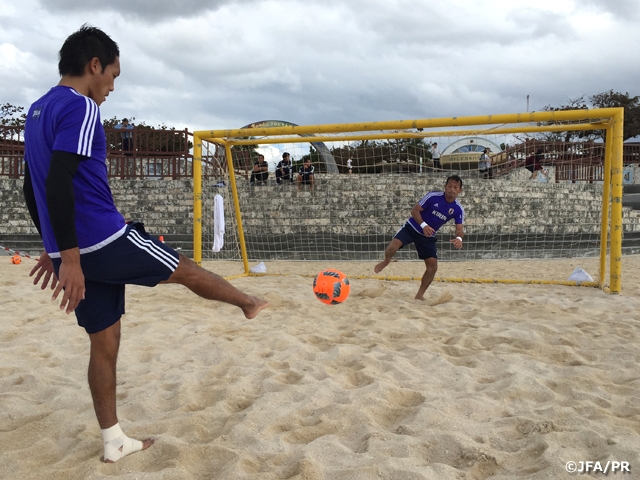 In the afternoon, the last practice session of this camp was held and they played an intrasquad scrimmage to wrap up their activities. Since this day was also Sunday, many local people came to watch the match. During this game-format training, the team reviewed their tactics, while addressing the issues found during the Brazil-UAE camp in October and fixing them.

In the past three days, the beach soccer squad went through five training sessions. Given the tough schedule, they looked fatigued, but at the same time they were giving their best to secure a spot in the national team who will compete in the World Cup Asian Qualifiers next year.

All the activities in 2016 for the Japan Beach Soccer National Team ended today. Two important tournaments will be held next year, namely the AFC Championship, which are also the Asian Qualifiers for the World Cup, and the FIFA Beach Soccer World Cup. The Japanese squad will continue their activities for the international competition and seek to surpass the previous result in the tourney.

Marcelo MENDES, Coach
I am very pleased with the Okinawa camp. The weather was excellent, and we were given such a wonderful opportunity to hold this camp. In training, we were able to address the issues found during the Brazil-UAE trip and fix them. Furthermore, I was also content that the players went through physical check-ups and maintained their condition during the camp. We will be taking a brief break after this meeting and resume our training to prepare for the World Cup Asian Qualifiers. I told the players that they need to keep their ‘good condition’.

I sincerely appreciate all the support the JFA and the team staff have given us. I would also like to thank the players. We will keep up our hard work to make 2017 a successful year.

MOREIRA Ozu (Fusion)
The last camp of this year was a wonderful one to wrap up the activities in 2016. Despite the brevity of the camp, we reviewed the team tactics and practiced thoroughly. It is a difficult time of the year for the beach soccer players to maintain their condition. However, every one here must do their best to keep their form. Next year will be an important year with major tournaments including the AFC Championship (World Cup Asian Qualifiers) and the FIFA World Cup. We need to make the best preparation possible and get ready for them.

OBA Takaaki (Dorsole Kitakyushu)
I sincerely appreciate this wonderful opportunity to hold a camp and practise in such an excellent environment. During the three days of training, we worked mainly on tactics. Needless to say, the training on the pitch was a fruitful one, but also the meetings held at night were detailed and we were able to conduct meaningful discussions.

In the intrasquad game, the communication amongst the players was excellent, and as I envisioned the team tactics instructed by the coach, I believe we improvied significantly as a team. We are looking to qualify the World Cup by getting through the Asian Qualifiers. We need to have even a greater sense of urgency and practise harder to get ready for the international competition.

KAWAI Yusuke (Sol Mar Praia Okinawa)
In the last day of this camp, we worked on various offensive schemes leading to a shot and had game-format training. We only had three days for training, but we were still able to construct plays using the things we learned during the camp and deepen the understanding of tactics within the team. Both the AFC Championship (Asian Qualifiers) and the FIFA World Cup will be held next year, and if we attain good results there, then we can make a good impression to not only the world but also the Japanese people. We will work hard as a team and bring back the medal. 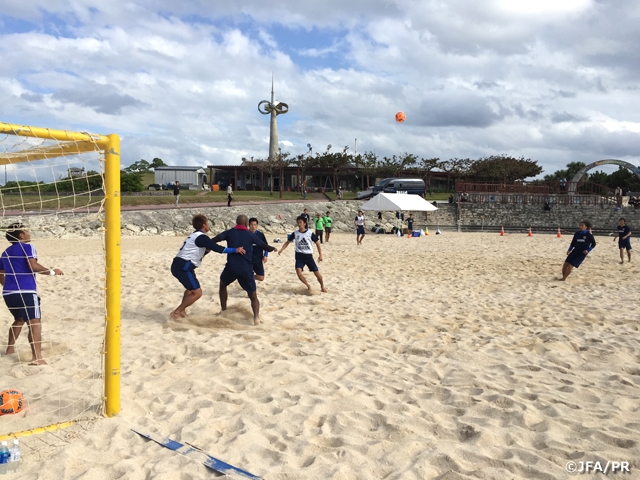