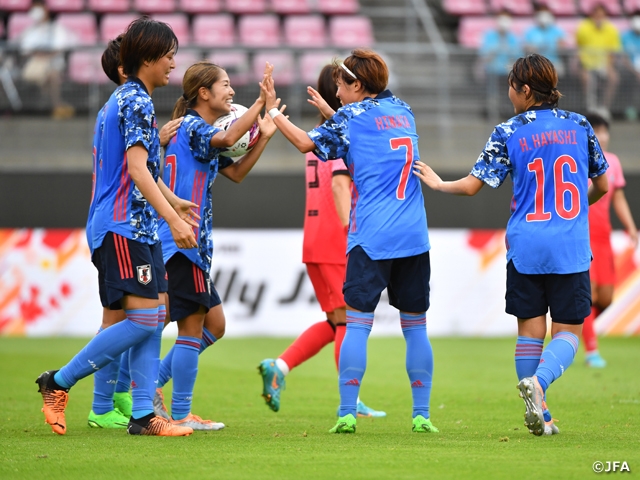 Seeking to defend their title, Japan trusted their right back SHIMIZU Risa with the armband, while NORIMATSU Ruka and TAKAHASHI Hana started as the two centre backs. NAOMOTO Hikaru was named as the attacking midfielder and UEKI Riko, who has scored in five consecutive matches for Japan, started as the lone striker.

Nadeshiko Japan's first official match in Ibaraki Prefecture, and the first domestic match under Head Coach IKEDA Futoshi, kicked off under rainy conditions with supporters allowed to cheer from designated sections of the stadium.

With Japan and Korea Republic facing each other for the first time since drawing 1-1 at the AFC Women's Asian Cup India 2022™, the match turned into a heated battle from the start, as the two sides demonstrated their strong wills to win the ball.

The opening goal was scored by Japan in the 33rd minute, when NARUMIYA Yui responded to a pass sent by Naomoto and delivered a cutback to MIYAZAWA Hinata, who calmly converted the opportunity to give Japan the lead. 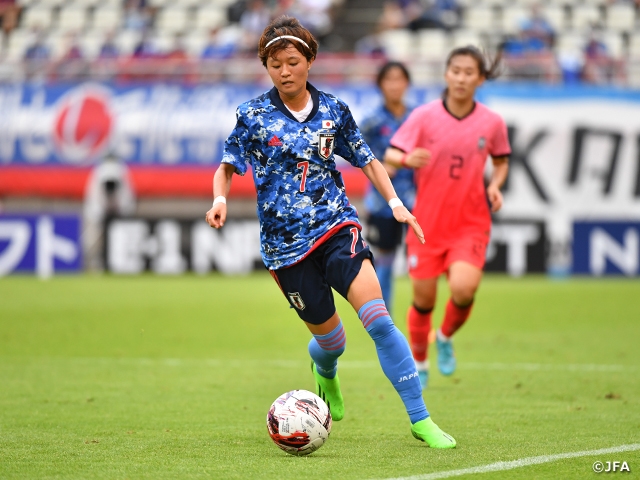 SUGITA Ami was introduced to start the second half, making her first international appearance in nearly five years. In the early minutes of the second half, Sugita created a close opportunity for Ueki, but the striker’s attempt was blocked by the opposing defenders.

In efforts to tie the game, Korea Republic started to utilise long-balls to create chances upfront, which led to the equaliser scored by JI So-yun in the 59th minute. However, Japan retook the lead in the 65th minute, when Ueki showcased great individual effort to break down the right flank to set up the goal of NAGANO Fuka. 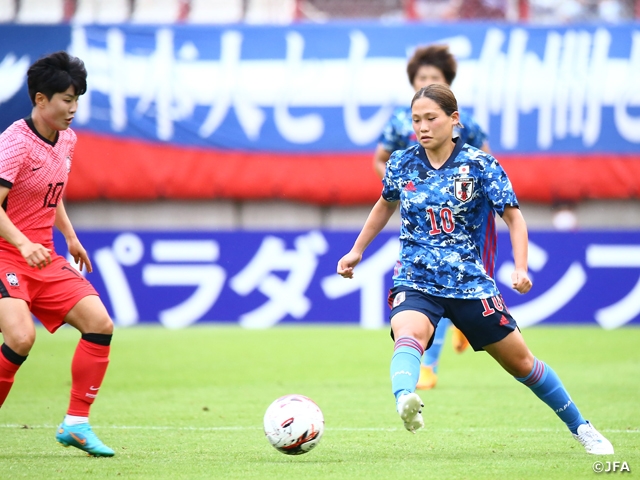 Soon after taking the lead, Japan brought on CHIBA Remina, who has shown great form in recent matches, while Korea Republic introduced their tall striker PARK Eun-sun. However, Japan managed to hold onto their lead to win the match 2-1, as they got off to a good start to defend their East Asian title, as well as to give a boost to the SAMURAI BLUE (Japan National Team), who followed the women’s side to play their first match of the tournament at the same venue.

IKEDA Futoshi, Head Coach of Nadeshiko Japan (Japan Women's National Team)
The match was played under high humidity, but we made sure to enter the match with great caution, as this match was our first match of the tournament. We were also prepared against the long balls deployed by the opponents. We looked a bit heavy and made many mistakes, but it was great that we were able to take the lead and make the necessary adjustments ahead of the second half. I am also proud of the team for the resilience they have shown to retake the lead after conceding the equaliser. We spent a lot of time in our own territory, but I think we did well dealing with the opponents’ long balls, and we also found an issue where we couldn’t capitalise on the turnovers to create opportunities, so we hope to do a better job in that aspect next time.

DF #2 SHIMIZU Risa (Nippon TV Tokyo Verdy Beleza)
We are not totally satisfied with our performance, and we still have a lot to work on, but we take it as a positive that we were able to beat Korea Republic, who we drew with in the Women's Asian Cup. With Korea Republic heavily depending on long balls, we were put in tough situations where we had to track back while trying to clear the ball, which prevented us from possessing the ball. Coach Ikeda asked me to be the captain, and although everyone on this team has great captaincy, I told him I would be honoured to represent the team and be the captain.

DF #4 TAKAHASHI Hana (Mitsubishi Heavy Industries Urawa Reds Ladies)
We were wary of the long balls, so I think it was an achievement that we didn't concede any goals from them. Norimatsu and I made it clear who would go for the ball to prevent the opposing forwards from creating chances, while we were also careful to control the defence line when facing the long balls. If we drop too deep, it makes it hard for the midfielders to cover the space in front of us, so that was something we were conscious of throughout the match. I would like to get a step closer when the opponents are trying to take a shot, so that is an aspect I need to improve on.

MF #10 NAGANO Fuka (North Carolina Courage/USA)
I am honestly happy to score my first goal for the national team. Korea Republic is capable of playing with great intensity and speed, so we entered the match with the mindset to keep up with them. I wasn’t able to capitalise on the opportunities in our last match, so I feel relieved to have scored a goal today. I know that number 10 is a special number for the national team, and I felt I had to showcase a meaningful performance, but I tried to keep my composure and remember to have fun.