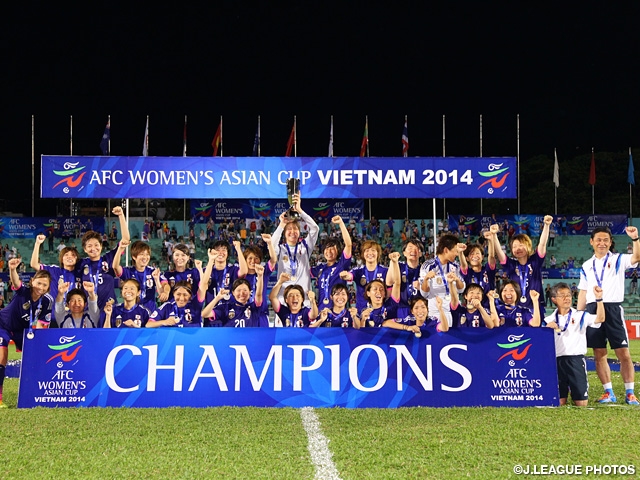 The two teams met each other again after the first match of the group stage. Japan’s defence consisted of the same players as they had for the semi-final led by GK Fukumoto. The midfield was manned by Nakajima on the right and Kawasumi on the left, as Takase was the lone striker and Miyama backed her up from right behind. How to stop Australia’s momentum early was a big key for in Japan’s game plan. Australia tried to attack aggressively with De Vanna leading the way, but Japan’s defence was well-focused and kept denying Australia decisive chances. At the 19th minute, on the other hand, Miyama with the ball from Sawa tried to feed Takase with a pass between defenders, but it barely missed Takase. Then at the 23rd, Japan gave the ball away after their corner kick, with which De Vanna surged toward and again threatened the Japan’s goal. As Japan were looking for more chances for the first goal of the match, they got another corner kick at the 28th. Miyama gave it to Utsugi on the left and Utsugi kicked a cross ball in to Iwashimizu, who scored the much-anticipated goal for Japan. After that both teams kept battling quite evenly for a long stretch. Japan tried to revamp its offence with Sugasawa replacing Sawa at the 65th and later Goto at the 75th and Kira at the 83rd subbed in as well. The match ended at last 1-0 with Japan defending Iwashimizu’s lone goal all the way to the finish. After the match Miyama recalled the moment of the game-ending whistle, saying “Sawa plays in nine Asian Cups and we never win. It would not be right. I was just happy that this team with her on the roster just won the cup.” It has been 33 years since Japan played in this event for the first time in 1981. Finally they got the first title.

Australia National Team ended up as the runner-up as China National Team finished third after beating Korea Republic 2-1. Japan were also awarded with the Fair Play Award, while the MVP was given to Miyama Aya, Japan’s captain. 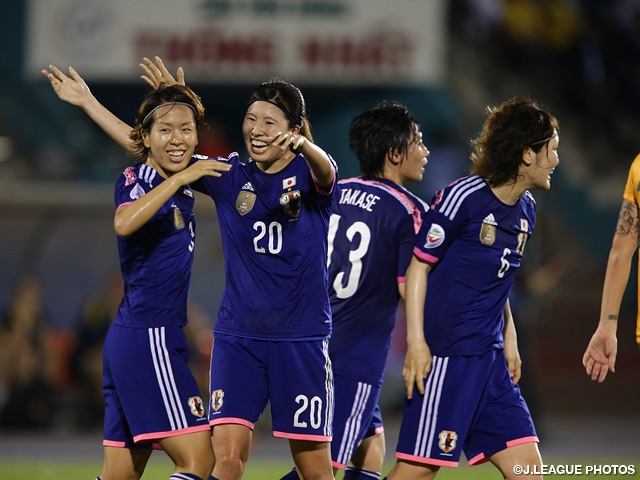 SASAKI Norio, Head Coach
We gave them a few big chances in the first half, but our defence led by Takase, Miyama and other midfielders defended aggressively to take away Australia’s strength. After we took the lead, it seemed that we lost some momentum, but Fukumoto and others played great and I give credits to them. We came to Vietnam to win our first title, so I am satisfied with this result. We will make adjustments to some mistakes we made in this tournament, and get better in our preparation period for the World Cup.

MIYAMA Aya（Okayama Yunogo Belle）
We won the World Cup before winning the Asian Cup, but this team really wanted this title, too. Now with the win in our hands, I just feel wonderful because all the hard work paid off.
The corner kick before our first goal was exactly how I wanted it. I made a mistake with the corner kick right before that, so we made an adjustment like that. Utsugi made a great kick for the goal.
I won the MVP, but everyone’s contribution including new players on the team meant so much more than just winning the title. This team still have more work to do, and I personally do, too. We still can’t dominate matches as much as we want to dominate, and everything including passes and ball control needs to get better. We need to take advantage of the good teamwork we have among this team, and it’s all up to us. It’s up to every one of us and how we start working again after we go back to our clubs.

UTSUGI Rumi（Montpellier HSC/France）
(At the moment of winning the match) I felt so happy to have my teammates. We told each other before the match that we would not be able to compete at the world level without winning the title in Asia. I was visualising how a cross ball like that would lead to a goal, so in the first half we could make that happen and I am happy about that. I think in this tournament I could play my style of the side back position, because I am a lefty and I’m also capable of playing the defensive midfielder. I could help my team to win, so I am happy with that. That gave me confidence.
Of course we want to play well, but we also want all people around us to feel our passion. That’s how we Nadeshiko play. The way we play hard and the way we achieve goals give something back to people who support us. Then that makes us even stronger together. If we can do more of that cycle, Japan can get even better.

TAKASE Megumi（INAC Kobe Leonessa）
Late in the match my legs stopped moving, and it’s disappointing that I couldn’t score a goal, but I am so happy that this team won the championship. It’s been a good experience for me, too. Scoring a goal is still a big assignment for me to keep working on. So I want to get better at it. 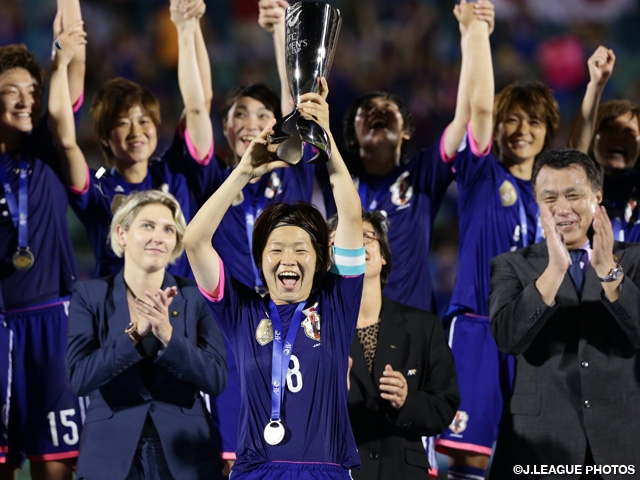