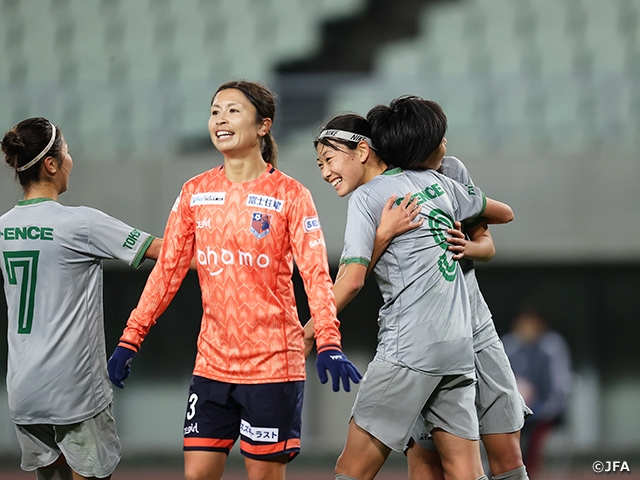 The quarterfinals of the Empress's Cup JFA 43rd Japan Women's Football Championship took place on Wednesday 29 December. At Yanmar Stadium Nagai, three teams from the WE League competed for their ticket to the semi-finals along with Nippon TV Tokyo Verdy Menina (Kanto/Tokyo), who are the only surviving team from the first round.

The match between Sanfrecce Hiroshima Regina (WE League/Hiroshima), who are playing in their first Empress's Cup, and Mitsubishi Heavy Industries Urawa Reds Ladies (WE League/Saitama), the runners-up of last year's Empress's Cup, was tightly contested until the deadlock was broken in the closing minutes.

In the first half, Regina, who had beaten Mynavi Sendai Ladies (WE League/Miyagi) in the fourth round, carried on their momentum to set the pace. TACHIBANA Yo led the offence, while KAWASHIMA Haruna displayed great intensity in defence to restrict Reds’ ball movement. However, after Regina’s MATSUBARA Yuna was forced to leave the match in the 17th minute due to an injury, Reds started to push back, as NAOMOTO Hikaru struck a direct free kick that nearly captured the upper left corner of the goal. Reds gradually picked up their pace in offence, as they collected the ball to their ace SUGASAWA Yuika to create opportunities. On the other hand, it was an unlucky first half for Regina, as UENO Mami was substituted at the end of the first half with a suspected concussion.

Reds continued their aggression in the second half, as TAKAHASHI Hana struck a header from a set piece to threaten the opposing goal. Despite the fine saves made by Regina’s goalkeeper KONOMI Runa to keep the clean sheet intact, the deadlock was broken in the 80th minute, after Reds shifted their formation to bring SEIKE Kiko in the attacking third. The goal came when the ball was carried by Seike and fell to Naomoto who shot a brilliant shot with her left foot to put Reds in the lead. 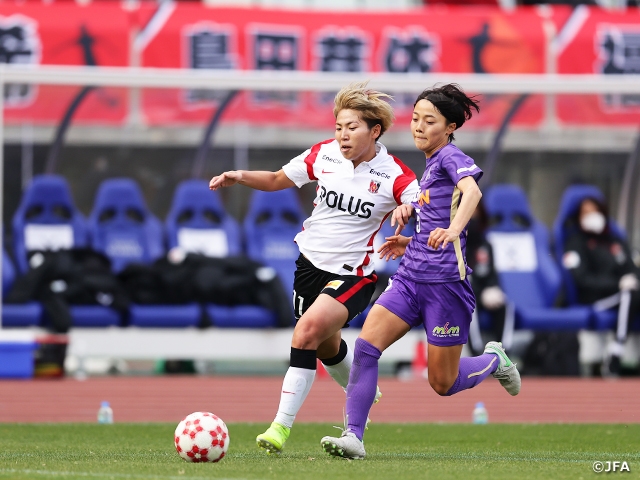 In efforts to equalise, Regina tried to collect the ball to SHIMABUKURO Namie and SAIHARA Mizuki, but conversely conceded the second goal to Sugasawa in additional time. After scoring two late goals, Reds reached the semi-finals for the fifth consecutive year.

In the match between Omiya Ardija VENTUS (WE League/Saitama), who claimed a come-from-behind victory in the fourth round, and Nippon TV Tokyo Verdy Menina (Kanto/Tokyo), the U-18 team that made a splash with a fourth round win over INAC Kobe Leonessa (WE League/Hyogo), it was the youth side that stole the show.

Both teams kicked off with the same starting line-up as in the fourth round, and Menina quickly took the initiative by effectively combining their dribbles and passes. With their defensive midfielders actively getting involved in offence, Menina scored the opening goal in the 34th minute, when HIJIKATA Maya pierced a shot into the left corner from distance, marking a goal in five consecutive matches. 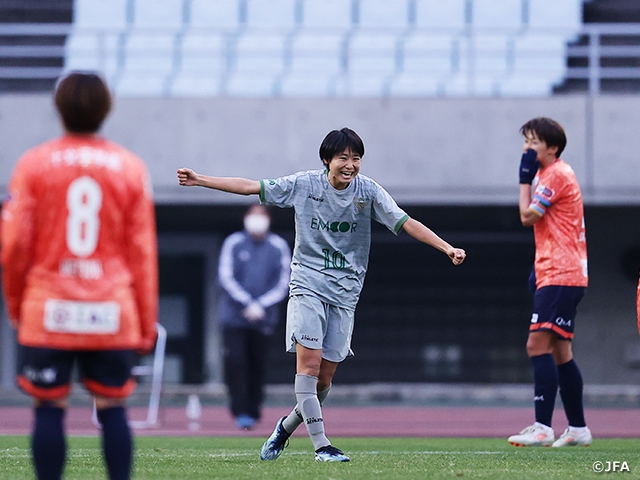 VENTUS struggled to get the ball to UETSUJI Yumi, who scored the decisive goal in the fourth round, or to INOUE Ayaka, their main scorer, as 13 year old AOKI Yuna and goalkeeper NODA Nina showed great composure and coverage to keep the Omiya side at bay.

In efforts to rally back in the second half, VENTUS shifted their formation to bring MURAKAMI Maho upfront, but it was Menina who scored the next goal. In the 51st minute, OYAMA Aemu responded to a loose ball in front of the goal to double their lead before MATSUNAGA Miyu assisted the goal of HIWATARI Moka in the 57th minute to make it 3-0.

VENTUS made their final efforts by introducing players like TAKAHASHI Miyuki but fell short from scoring a goal despite the attempts made by Uetsuji and Murakami. With Matsunaga scoring a header in the closing minutes, Menina won the match 4-0 to cause another upset and reach the semi-finals. 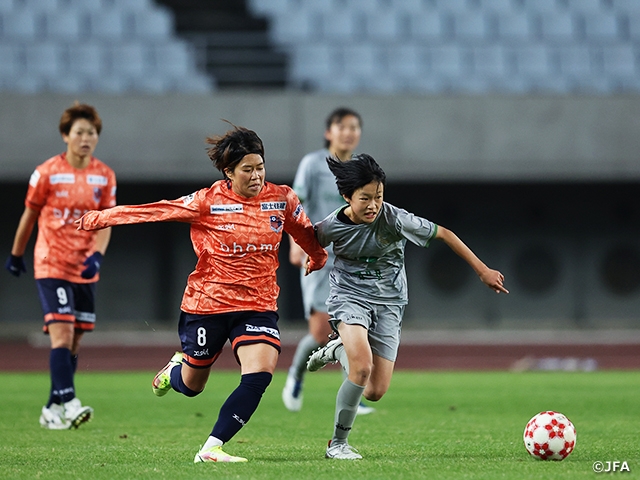 NAKAMURA Shin, Coach (Sanfrecce Hiroshima Regina)
We had some incidents in the first half, but I think we did what we could with the players we had. It was great to see that we could fight like we did today, but we need to improve the quality of our counterattacks and our ability to finish in the final third. We talked about the need to develop the strength to turn games like these around by scoring goals.

MF #8 NAOMOTO Hikaru (Mitsubishi Heavy Industries Urawa Reds Ladies)
We entered the match focusing on working hard to win the ball. The fact that we managed to move the ball around as a team helped us score those two goals at the end. Seike made a great effort to carry the ball upfront, and I was able to deliver a shot exactly where I wanted. We are expecting another tough match, so we hope to showcase another persistent effort like today to grab another victory.

MF #8 OYAMA Aemu (Nippon TV Tokyo Verdy Menina)
I'm glad that we were able to keep the momentum we had in our last match against Leonessa to win this match. We didn’t know how our opponent was going to defend against us, so we made adjustments as we played the match. (Reflecting on the goal scene) The ball fell exactly where I wanted, so I was able to square up and hit the ball right on target. It was our goal to beat the WE League clubs in the Empress's Cup and now that we have come this far, we want to win the next one and go to the final.

FW #9 INOUE Ayaka (Omiya Ardija VENTUS)
After conceding the lead in the first half, we wanted to retake the initiative in the second half but ended up conceding multiple goals. If we had scored first in the second half, I think the match would have gone differently. The fact that our opponent had the upper hand in one-on-ones led to this result. We lacked creativity in the attacking third, so that is an aspect we must improve ahead of the second half of the season.