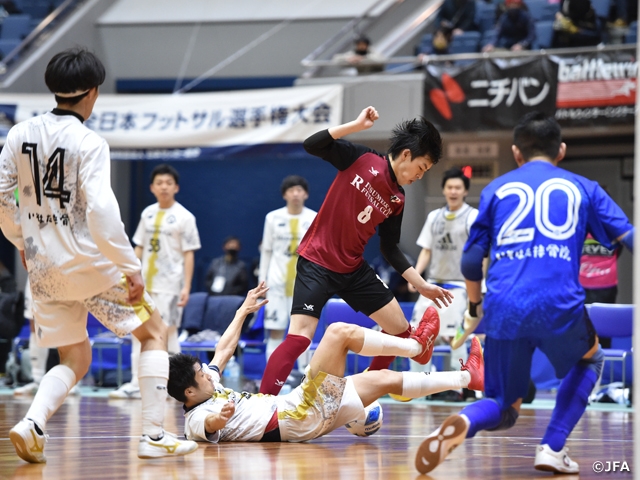 The third round of the JFA 26th Japan Futsal Championship took place on Sunday 21 February, determining the four teams advancing through to the round of 16. Two clubs from the F.League second division and two clubs from regional leagues will be joined by 12 clubs of the F.League first division to compete for the national title.

Hakusan took the lead when TSUDA Kyoichiro struck a powerful shot in the ninth minute, but the score was soon tied when Dele Yaone’s INAGAKI Hideyasu flicked the ball into the net with his heel in the 11th minute. After the two sides exchanged a goal apiece, Dele Yaone took the lead when OKAYAMA Kazushi capitalised on an opportunity in the 34th minute, which turned out to be the decisive goal, sending the Tokai League first division club into the round of 16. 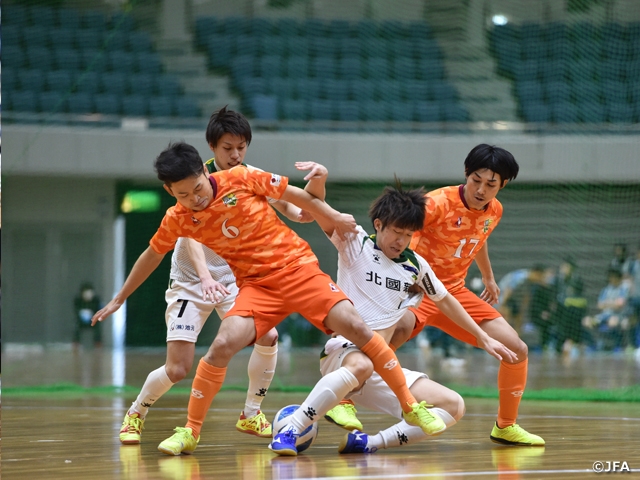 The match between Hiroshima and Ibaraki saw an early goal scored in the second minute, when MISHIMA Kohtaro redirected the ball into the net to give Hiroshima the lead. Despite showing great skills on the court, Malva Ibaraki struggled to break through the solid Hiroshima defence. With TOMIHIRO Yohei scoring the team’s second goal in the 13th minute, and Mishima scoring his second goal of the match in the 27th minute, Hiroshima F.DO cruised through the third round with a final score of 3-1. 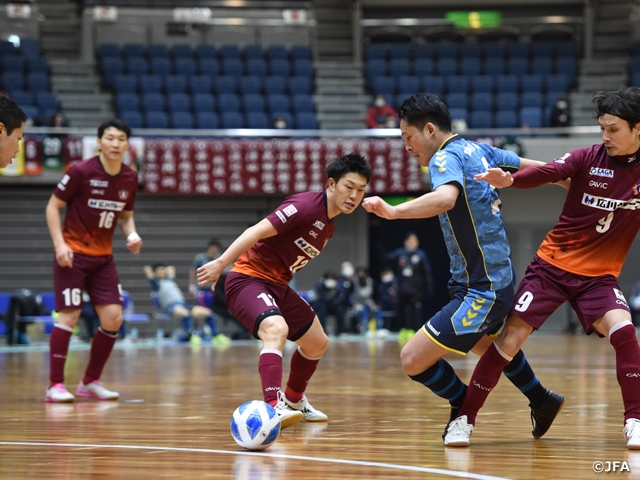 Toruela Kashiwa (F2/Chiba), who finished the season with a perfect record at the F.League second division, squared off against Crescer FC (Kyushu1/Fukuoka), who consists many former F.Leaguers in their squad. While the two sides tested the water in the early minutes, Kashiwa broke the silence with the goal scored by NIWA Shuto in the 19th minute. With the opening goal giving them momentum, the F2 champion went onto score seven goals to secure their seat into the next round, as they won the match 7-1.

O-PA (Kanto2/Chiba) and Ritsumeikan University intramural club All.1 (Kansai2/Shiga) showcased an intense battle that went down to the wire. Trailing by a score of 1-3, O-PA deployed their power-play early in the second half. Despite scoring three goals, O-PA still trailed by two goals against the collegiate side in the 39th minute, but HAYASHI, Kenji registered his fourth and fifth goal of the match in the final minute to level the score 6-6, sending the match into overtime. With the Chiba side continuing to play their power-play, it was KONUMA Masahito who scored the game winning goal in the 42nd minute, allowing O-PA to reach the round of 16.

Among the teams who entered the tournament from the first round, two F2 clubs, Kashiwa and Hiroshima advanced through, while two clubs from regional leagues, Dele Yaone Gifu/AGM and O-PA made their way into the next round. The round of 16 will take place on Saturday 27 and the quarterfinals will be played on Sunday 28. With 12 first division clubs of the F.League entering the tournament from the next round, the competition level is destined to pick up, so please stay tuned for more heated action from the JFA 26th Japan Futsal Championship.

FP #3 KIMURA Keisuke (Dele Yaone Gifu/AGM)
We have been facing clubs from the F.League since the second round, and it has given us lots of motivation to prepare well ahead of the matches. We had nothing to lose, and we thoroughly went over the scouting report ahead of this match, which really helped us earn this victory. Despite conceding the opening goal we managed to stay positive and really just focused on having fun. We will be facing an F1 club in the next round, but we are confident that we can do well against them too.

FP #8 NAGAMURA Yaichi (Vincedor Hakusan)
After working together as a team for the past year, we saw many improvements in our plays, but in terms of mentality and game management, us veterans had to do a better job on leading and supporting the young players. We lost to a regional league club, who is very much capable of competing at a higher level, but as a club competing in the F.League, we had to win this match. All players playing in the F.League must acknowledge that they are playing at the league not because they are good at playing futsal, but because they have dedicated their lives to play at this level.

FP #5 NIWA Shuto (Toruela Kashiwa)
Crescer is an opponent we have struggled against in the recent training matches, but we managed to do well against them today. We knew exactly what we had to do to win this match, and I feel like we were able to execute our game plan. Recently, I have been limited with my playing time, so I really wanted to make the most of the opportunity I was given, and I am just glad that I was able to score that opening goal.

FP #9 DAIMO Tetsuro (Ritsumeikan University intramural club All.1)
We had many talented players this year, and I was fully committed to helping our team stay motivated on and off the court. This was a very disappointing loss, especially with it being our last match with this squad. However, I feel like we were able to enjoy the match. We entered the tournament with the goal of causing some major upsets and win a match against an F1 club. I hope more people recognise our team after this tournament. Even after our players change, the team will continue. It’s frustrating, but I think we were able to put up a good fight. 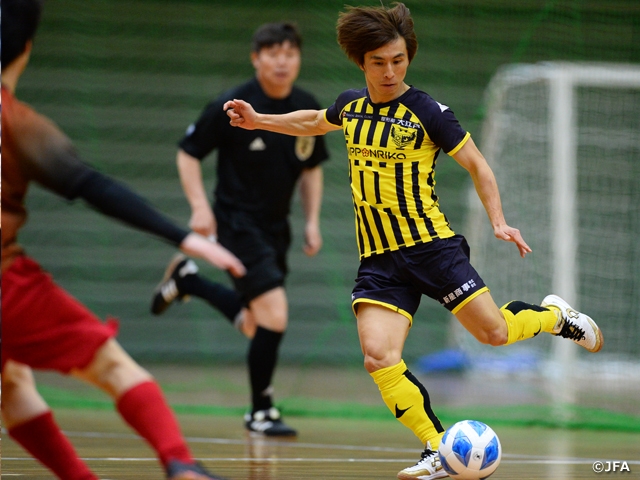 3rd Round 2/21【Highlight】O-PA vs Ritsumeikan University intramural club All.1