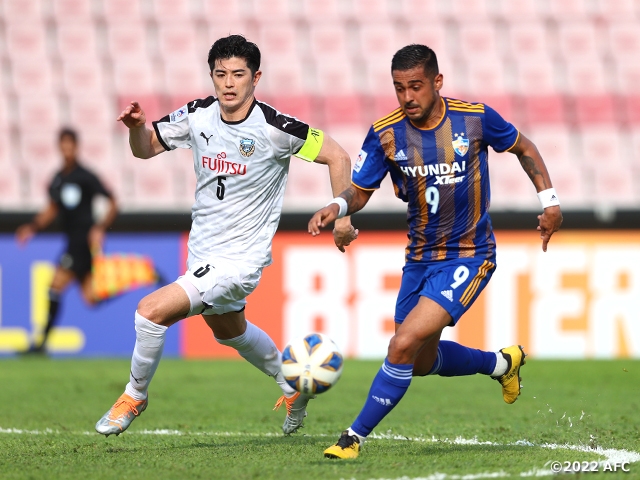 The East group stage of the AFC Champions League (ACL) 2022 began on Friday 15 April with Group I side Kawasaki Frontale taking on Ulsan Hyundai FC (Republic of Korea) in Johor Bahru, Malaysia. With second half substitute KURUMAYA Shintaro scoring the equaliser in the closing minutes, the Kawasaki side took away a point to start off the group competition. Elsewhere, Urawa Red Diamonds and Yokohama F. Marinos each started off with a victory in Group F and H respectively.

Kawasaki, the J.League champions who are seeking to win their first ACL title, faced Ulsan Hyundai in their first match, the opponent they lost in the round of 16 last year after the match went into extra time and a penalty shoot-out. The two sides who have faced each other in the group stage of the previous three tournaments, once again showcased a hard-fought battle.

With the match kicking-off at 5pm in Johor Bahru, Malaysia, Kawasaki struggled to deal with the heat and high humidity, while Ulsan showcased great form from the start. It was the Korean club who scored the opening goal when their striker LEONARDO capitalise on a counterattack in the 21st minute.

After taking the lead, Ulsan dominated the match by keeping possession of the ball, while Kawasaki were unable to create chances to break through the defensive block laid by their opponents. However, with Leandro DAMIAO being introduced at the end of the first half, and with YAMANE Miki and TONO Daiya making overlapping runs to add depth to the offence, Kawasaki gradually picked up their pace as the match progressed.

In efforts to change the dynamics of the match, Kawasaki changed their formation from 4-2-3-1 to 4-3-3, a system they are more familiar with, which allowed the team to create more chances in the attacking third, including the shot taken by TACHIBANADA Kento in the early minutes of the second half. Another close opportunity was created just before the hour mark, when Joao SCHMIDT delivered a long feed to MARCINHO, who setup the shot of Damiao.

Gaining momentum from the system change, Kawasaki brought in WAKIZAKA Yasuto in the 63rd minute, CHINEN Kei, MIYAGI Ten, and Kurumaya in the 69th minute, followed by KOBAYASHI Yu in the 80th minute.

Kawasaki’s attacking efforts finally came to fruition during additional time, when the shot taken by Miyagi earned them a corner kick. The ball delivered by Wakizaka was fumbled by the goalkeeper, which allowed Kurumaya to strike a volley shot with his left foot, as the defender later reflected, “I knew it was going to be our last play. My body reacted on its own.”

The match ended shortly afterwards, and the persistence of Kawasaki saw them draw 1-1 with Ulsan and secure a hard-earned but valuable point.

Following the match, Kawasaki’s coach ONIKI Toru commented, “I was extremely encouraged by the players' determination to fight until the end. This is a huge point for us.”

In the other match on this day, home side Johor Darul Ta'zim (JDT) won 5-0 against Guangzhou FC (China PR) to take the top spot in Group I. Kawasaki will now face Guangzhou on Monday 18 April.

On Saturday 16 April, Yokohama FM played against the local side Hoang Anh Gia Lai in Ho Chi Minh City, Vietnam. Although Yokohama FM struggled against the heat and the huge turnout of the local supporters, which gave the home side extra momentum at the beginning of the match, last season's runners-up of the J.League managed to take the initiative of the match through set-pieces.

Yokohama FM scored the opening goal from a corner kick in the 19th minute, followed by a free kick in the 25th minute, which were both scored by Leo CEARA, to take control of the match. 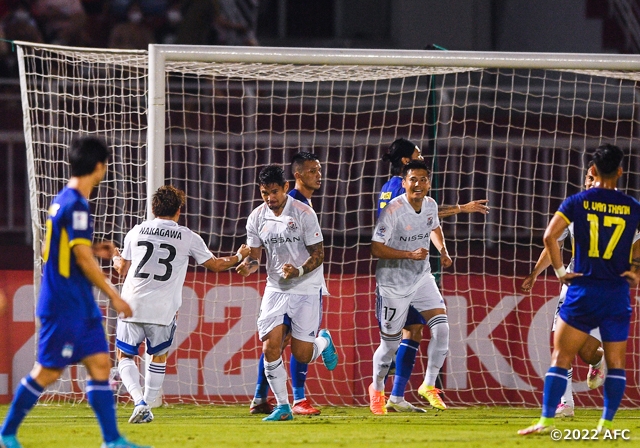 Despite conceding a goal from an own goal in the 31st minute, the Yokohama side managed to maintain their composure and limit the damage to just this goal. With Ceara and second half substitute MIZUNUMA Kota creating chances to threaten the opposing goal in the second half, Yokohama FM opened their first ACL campaign since the 2020 season with a victory.

After the match, Yokohama FM’s coach Kevin MUSCAT mentioned, “It was a tough match as expected, but I am glad we were able to start off the group stage with a win. This is a great start for us.”

On Friday 15 April, Group F kicked-off in Buriram, Thailand, where Urawa made their return to the ACL since their 2019 campaign, in which they finished as the runners-up. Facing Lion City Sailors FC (Singapore), Urawa dominated their opponents throughout the match with fluid attacks from the outset.

Led by the opener scored by Kasper JUNKER in the eighth minute, ESAKA Ataru and David MOBERG followed in the 15th and 42nd minute respectively to extend the lead to 3-0. Despite conceding a goal from an own goal in the 43rd minute, MATSUO Yusuke scored the fourth goal in the 47th minute to keep the team’s momentum going, as the Urawa side cruised through their first match with a 4-1 victory.

“In a competition like this, it is important to win the first match. We were able to achieve that, and played a good match,” said Urawa’s coach Ricardo RODRIGUEZ, while Matsuo, who scored his first goal since joining the club this season, also commented, “I am relieved with this victory, but the team has potential to score more goals, so we hope to showcase a better performance in our next match.” 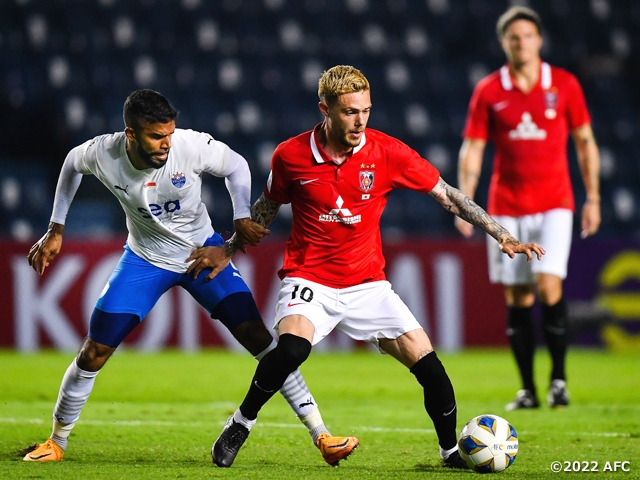 Vissel Kobe’s opening fixture in Group J was cancelled after Shanghai Port FC (China PR) withdrew from the competition in light of the ongoing spread of Covid-19. The group will proceed with three teams, as Kobe is now scheduled to play their first match on Tuesday 19 April against Kitchee SC (Hong Kong), who is coming off a 1-0 victory over Chiangrai United FC (Thailand).

The East group stage will continue to take place in a two-legged round-robin format at centralised locations until Sunday 1 May. Top teams from each of the five groups along with the top three teams among the runners-up will advance to the knockout stage, scheduled to be held in August.

Teams advancing to the knockout stage will continue to compete in their respective divisions up to the semi-finals, before the top teams of the EAST and WEST will square off in the final in a home-and-away format next February to determine the Asian champions.

ONIKI Toru, Coach (Kawasaki Frontale)
It was important that we compete until the end, and the players did just that in this tough climate. We wanted to be aggressive from the start of the match, but our opponents didn’t allow us to press forward, which is an aspect we must improve on. However, we managed to pickup the pace after changing our system in the second half, so that is something we can be positive about. Of course, we entered the match aiming for three points, but considering we were behind, this point is huge for us. We must make the most of this experience for the upcoming fixtures. We will continue to stay focused, be more aggressive, and try to showcase our colour.

DF KURUMAYA Shintaro (Kawasaki Frontale)
I had been out with an injury for a while, and I felt like I had caused trouble for the team, so I entered the match with the intention to make some kind of impact. It was a goal that wasn't like me, but my teammates worked hard to build the momentum and earn those set-pieces, so the goal came from a total team effort. There is a big difference between losing and drawing in these short-term competitions, so this point means a lot for us.