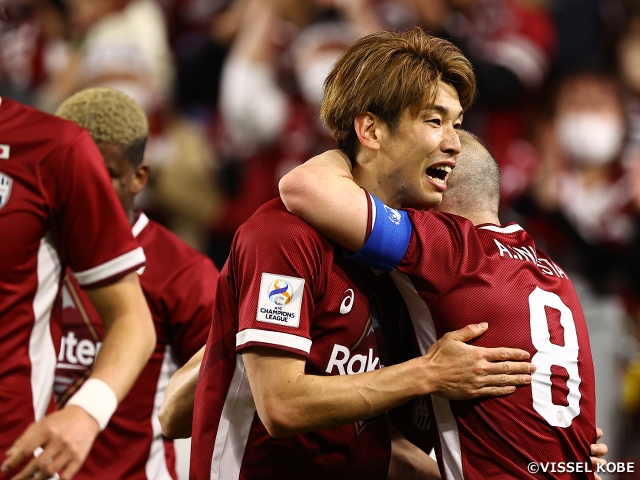 The AFC Champions League (ACL) 2022 play-offs took place on Tuesday 15 March, with Vissel Kobe playing Melbourne Victory (Australia) at home. After the match went into extra time, LINCOLN scored the winning goal in the 95th minute to give Kobe a 4-3 victory and a place in the ACL for the second time in three seasons.

Kobe, aiming for the Asian title, finished third in the J1 League last season to qualify for the one-match play-off. In a closely contested match against Melbourne, who earned their spot into the play-off by winning the FFA Cup in February, Japan National Team’s OSAKO Yuya proved to be the difference maker, as the striker scored two goals in the closing minutes to propel his team to victory and was named as the player of the match.

Kobe had not won a match in six league matches this season, but they were able to take the lead early in the match, when Andres INIESTA converted the deflection of a shot taken by NAKASAKA Yuya in the sixth minute. 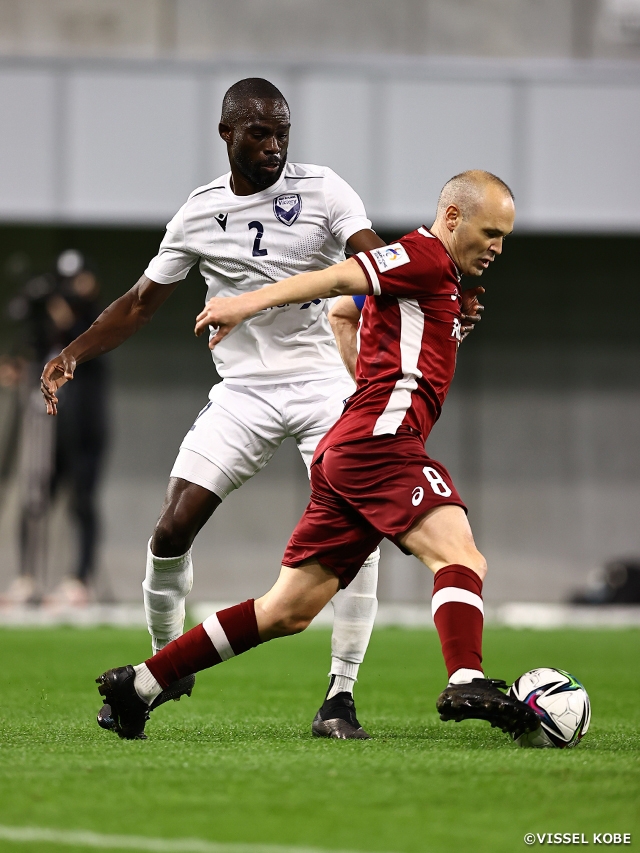 Melbourne, who are seeking to qualify for their ninth ACL, equalised the match in the 12th minute when Nicholas D'AGOSTINO scored from a corner kick.

Things got worse for Kobe in the 22nd minute, when Sergi SAMPER, one of their key players in both offence and defence, was forced to sub off due to an injury.

Melbourne, under coach Tony POPOVIC, who led Western Sydney Wanderers FC to win the ACL title in 2014, deployed a back three that was different from their usual league formation. With former player of Urawa Matthew SPIRANOVIC in the centre, the Australian side applied numbers to defend their goal while anticipating to score goals from set-pieces and counterattacks.

In the 31st minute, D'Agostino, who is the leading scorer of the team, came close to converting a cross from the right flank, but Kobe’s goalkeeper IKURA Hiroki made a fine save to deny this opportunity.

The next goal came in the 71st minute. Melbourne's Gbenga Tai FOLAMI, who came on as a substitute, initiated a counterattack and delivered a cross to setup the goal of D'Agostino to make it 2-1.

However, Kobe immediately responded with shots from Osako and Iniesta to threaten the Melbourne goal, and in the 80th minute, KIKUCHI Ryuho flicked the corner kick delivered by HATSUSE Ryo to allow Osako to score at the far side.

Seven minutes later, the ball was connected through Lincoln and SAKAI Gotoku before YAMAGUCHI Hotaru delivered a cross towards the near side, allowing Osako to score his second goal of the match to put Kobe ahead, 3-2.

Despite conceding the lead to the home side late in the match, Melbourne showed resilience to equalise when Folami took advantage of a deflection from D'Agostino's shot in the 90th minute, sending the match into extra time.

After the entire team huddled up before the starting whistle, Kobe showed great aggression from the start of extra time. In the 95th minute, Iniesta redirected the ball delivered by Hatsuse to allow YURUKI Koya to receive the ball inside the box and send the ball towards Lincoln, who found the back of the net to give Kobe the lead for the third time in this match. 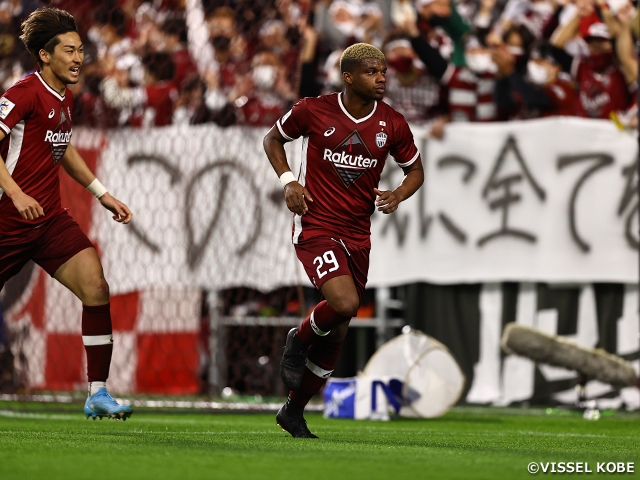 With Melbourne showing signs of fatigue, Kobe took control of the ball possession to maintain their one-goal lead until the end to punch their ticket to the ACL for the second time since the 2020 tournament, which they reached the semi-finals.

Heated battles in other venues

In other venues, Daegu FC (Korea Republic) edged Buriram United (Thailand) 3-2 in a penalty shootout, after the match was tied 1-1 after extra time. Ulsan Hyundai FC (Republic of Korea) defeated Port FC (Thailand) 3-0. Daegu will be grouped with Urawa Red Diamonds in Group F, while Ulsan Hyundai will be competing in the same group as Kawasaki Frontale in Group I.

In Group H, Yokohama F. Marinos will be joined by Sydney FC (Australia), who had already qualified through the play-offs. Including Group G, in which there are no Japanese teams, 20 teams in the East region will compete in five groups in the group stage.

Also in the West, FC Nasaf (Uzbekistan) won 2-0 against Baniyas Club (UAE) to move into Group E. Winners were decided by penalty shootouts in both Group A and Group D, as Sharjah FC (UAE) defeated Al Zawraa SC (Iraq) to join Group A and Al Taawoun FC (Saudi Arabia) edged Al Jaish SC (Syria) to join Group D, after both matches were tied 1-1 after extra time.

Teams will be divided into East and West regions up to the semi-finals. In efforts to prevent the spread of Covid-19, the group stage will be held in one city per group, instead of the traditional home-and-away format. The group stage in the East region will be held from Friday 15 April to Sunday 1 May, with the top team from each group and three teams with the best record among the runners-up advancing to the knockout stage where they will compete in a single elimination format.

The round of 16 will take place on Thursday 18 and Friday 19 August, quarterfinals on Monday 22 August, and semi-finals on Thursday 25 August. In consideration of the FIFA World Cup Qatar 2022™, which will take place between November and December of this year, the final will be played early next year in a home-and-away format with the first leg (West region home game) played on Sunday 19 February and second leg (East region home game) on Sunday 26 February.

MIURA Atsuhiro, Coach (Vissel Kobe)
The players and staff were fully determined to win today’s match. I think the players showed a lot of heart despite this match being a single match play-off with a lot of pressure. The match went exactly as we anticipated, and I think we were able to take control for the most part. Although we struggled against our opponents’ height, the players showed great tenacity to fight through, which I believe led to this result. Players and teams are like a living creature. They gain momentum by winning matches, so I hope this win will give us positive momentum for our upcoming league matches. The players are starting to mesh, but we have not been able to win matches in our league, so we must use this time to get ourselves on the same page, understand our strategies, and showcase our desire to fight and win as a team.

MF YURUKI Koya (Vissel Kobe)
(Reflecting on his last assist) The pass from Andres was wonderful. We are still trying to find the right timing in those situations, but it went well today. I am always anticipating to send the ball in between the opposing goalkeeper and the defenders, so I will continue to improve the quality of my plays in the final third.

MF YAMAGUCHI Hotaru (Vissel Kobe)
As the score shows, this was a very tough match, but the team showed great heart to fight through. Everyone, including the starting elven and the substitutes, worked extremely hard to help us earn this result.

FW OSAKO Yuya (Vissel Kobe)
We hadn’t won a match this season, so it's a relief to finally get one, and we need to show the same intensity as we did today in every match. We need to remember how we entered and played in this match. After I was side-lined for two matches, I was able to see what we lacked as a team and what I had to do on the pitch. I shared my observation with the veterans like Yamaguchi and Sakai, which helped us demonstrate a strong performance today. The second goal came from a routine we had been training and Yamaguchi delivered a perfect ball. Those types of goals really help us gain momentum. I was also anticipating on scoring the first goal as well.

FW LINCOLN (Vissel Kobe)
I am very happy to have captured this victory at home. While I have been able to raise the level of my plays, I was able to score the winning goal with the support of the home supporters and I felt elated when I scored that goal.

Tony POPOVIC, Coach (Melbourne Victory)
It turned out to be an amazing game with seven goals. I would like to congratulate Kobe for qualifying for the ACL. I think it was great that we were able to showcase this kind of exciting performance in Japan as a club representing the Australian league. Of course, it's a shame we couldn't make it through, but the players did a great job and I'd like to thank them for their hard work. I think we showed great resilience and a wonderful goal to equalise from 3-2. In big matches like this, small moments can make the difference between winning and losing. The quality of the players, especially going into the second half and extra time, made the difference in the end, and I think physically they were better than us.