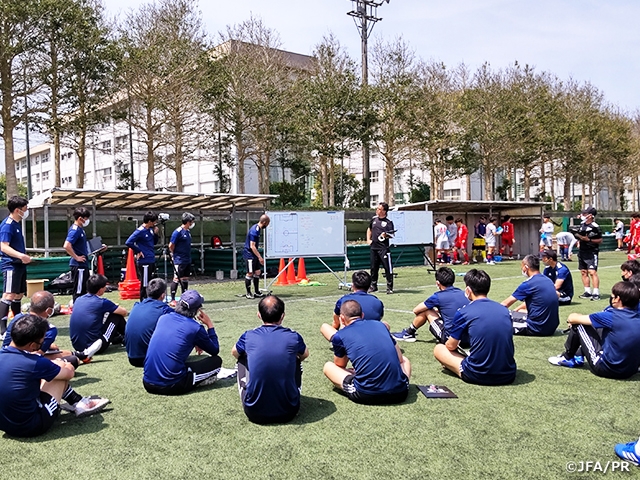 The Class S Coach Training Course 2022 has started on Sunday 20 April. The 20 participants, who were selected through a trial held in December last year, will come together to work with and challenge each other as valued colleagues and good rivals for the next nine months until December. 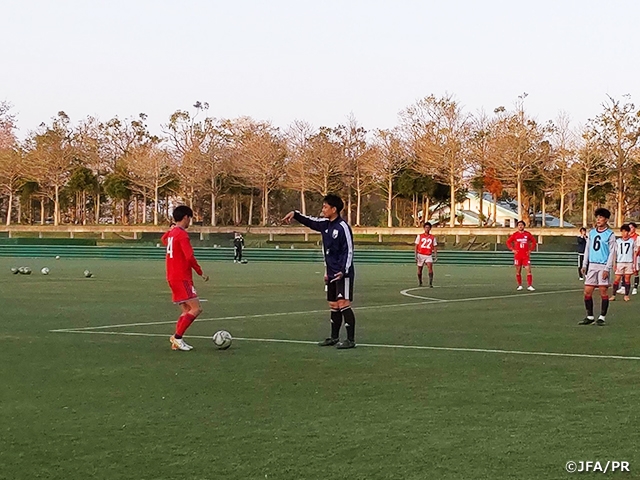 Mr. AONO Shinya (Ehime FC)
The Class S Coach Training Course 2022 started on 10 April, and I had the impression that the group work which took place immediately after the opening ceremony did not go smoothly, with participants testing the waters and observing each other's behaviour. However, we gradually managed to communicate our own ideas, listened to the ideas of other participants and tried to understand everyone, which ultimately led to a good discussion. In addition, the presentations held by other groups with different perspectives were very refreshing and instructive.

During the ASE held on the second day, we were reminded of the importance of having discussions in order to achieve our goals and to correct our course. In the process, I felt we were starting to bond as a team and learned the importance of communication. In one of the most memorable tasks, we were instructed to walk in a group of seven with everyone placing one foot on each of two long vertical planks, with the whole group walking like a “centipede race.” We started with a simple setting, but in the last setting, the participants were blindfolded and had to aim for a goal several tens of metres away without any voice, sound or other cues. We were unable to take a single step for about ten minutes without our ability to communicate. There were moments when I thought it was impossible to move, but I experienced that by concentrating on the first step while thinking about each other, allowed us to move forward in an explosive way, even without being able to communicate with each other. It was a moment that made me think that thinking about each other is one of the key things to do when a team is not doing well.

In the practical coaching session from the third day onwards, we took turns to play the roles of the head coach, two coaches, goalkeeper coach and physical coach to address the issues identified from the FC Tokyo vs Urawa Red Diamonds match we observed. We first spent a lot of time discussing and refining our view of football among the head coach and coaches, before conducting a series of trial-and-error training sessions to correct the issues, during which instructor UKISHIMA Bin kindly commented that “it is important to create your own evaluation criteria.”

I felt that having a standard of what is good and what is not, allows us to convey our vision to the coaching staff and players, making it easier for us to share the big picture, allowing the players to play and the staff to coach without any hesitation. After the coaching session, I received various insights and ideas from other participants and instructors, which made it a wonderful learning experience for me to become a better coach.

I am very grateful to Ryutsu Keizai University Football Team for providing their players for this training course, and to the players for their patience and dedication to play under such difficult conditions. Thank you very much. We are hoping they will have a great season this year.

Finally, I would like to remember to express my gratitude to the many people who have made it possible to hold this in-person coaching course in the midst of the Corona pandemic, and I will do my best to establish myself in this coaching course that will continue from here until December.

In the “Match Analysis Group Work,” participants discussed football with people they had never met before and gave presentations on what they had discussed. It was not an easy task, but by holding repeated discussions with an open mind, and with the use of video and PowerPoint, we were able to learn each other's ideas, while also getting in touch with how other groups perspective and how they held their presentations

The ASE Programme was conducted at the Central Youth Center of Ibaraki Prefecture, where the participants formed groups of six to seven people and worked together to solve problems that they could not solve alone. I was particularly impressed by the programme in which everyone had to climb over a four to five metre wall. To be honest, I thought it would be difficult at first, but after discussing it in groups and thinking about the process to achieve this task, we were all able to cooperate and succeed. The sensation we felt when we achieved this was very pleasant. It was a programme that I would definitely like to implement with my team.

The “Practical coaching session” was a session to improve issues raised in the previous day's match analysis, with five members of the group rotating the roles of head coach, two coaches, goalkeeper coach, and physical coach in turn. The order was drawn by lots, and I was given the honour to go first. It was very nerve-racking, but with the support of my groupmates, Aono-san, Iwata-san, Oshima-san, and Oshiba-san, we were able to successfully complete the session within the limited preparation time. The precise feedback we received from the JFA instructors and other participants after the session provided great insights and were very useful.

Through the Class S Coach Training Course 2022, I would like to cherish the encounters with wonderful people, to gain a lot of inspiration, learning, and awareness with an open mind, to grow as a person, and to establish my own view of football with “responsibility” and “determination.”

Finally, I would like to thank the JFA for their efforts in preparing this course, the players of Ryutsu Keizai University for their participation, the staff of Kashima Heights for welcoming us, and the open-mindedness of the participants, for making it possible to successfully complete the first short course amidst the difficult conditions of the Corona pandemic.

Mr. IWATA Naoyuki (JEF United Ichihara Chiba)
First of all, I would like to express my gratitude for the opportunity to participate in the JFA Class S Coach Training Course 2022, which was made possible by the cooperation of many parties involved during the difficult situation with the pandemic.

The much-anticipated Class S Coach Training Course began with an opening ceremony on 10 April in the Cross Wave Fuchu training room. The first week was held in the form of a short course, which consisted of an ASE programme, game analysis, creation of a training menu based on the game analysis, and a practical coaching session. The ASE programme stands for “Action Socialization Experience” and is an activity in which groups of around eight people are presented with challenges that are both physically and mentally demanding and impossible to solve on their own, and then seek solutions through trial and error. The activity that left the greatest impression on me was the one in which we all had to work together as a group to climb a high wall that would be impossible to climb alone. When I first saw how high the wall was, I felt that there was no way we could climb it, but when everybody in the group got together, we came up with ideas that I could not have come up on my own, and using those ideas as hints, we were able to come up with solutions that were much more optimal to overcome the challenge. The moment we all managed to climb the wall at the end, it was an indescribably refreshing feeling. At the same time, it reminded me of the importance of communication, actively sharing ideas, working together as a group, and the desire not to give up until the very end.

In the match analysis, the participants observed an actual match played between teams that we had analysed in advance and compared those analyses with what actually took place in the match. The participants were divided into groups for this assignment, where we discussed and summarised the results of our analysis.

In the practical coaching session, five students took on the roles of head coach, two assistant coaches, a goalkeeper coach, and a physical coach, analysed the match observations to develop and implement a training plan to overcome the team's identified problems. As head coach, I was able to clarify each staff member's role in the training session, and by having staff members share situations that I could not notice on my own, it was very refreshing to work as one team to overcome the challenges. It was a very interesting experience for me, because I have never had the experience of running a training session with such a large number of coaching staff. This coaching session has allowed me to realise how difficult it is to define roles and manage the staff in practice.

Although the course has only been running for a week, I am getting the impression that it requires a very high level of professionalism and hard work. It will be a long training course until December, but I will do my best to keep up. The 20 participants and instructors whom I have met will undoubtedly help me to grow as a person and will be a valuable asset in my coaching career. We will all work hard together and make this a productive course.

Next week we will share the report of Mr. OSHIBA Katsutomo (Ventforet Kofu). 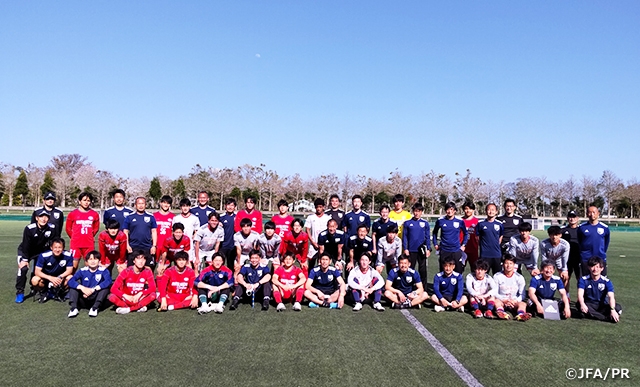