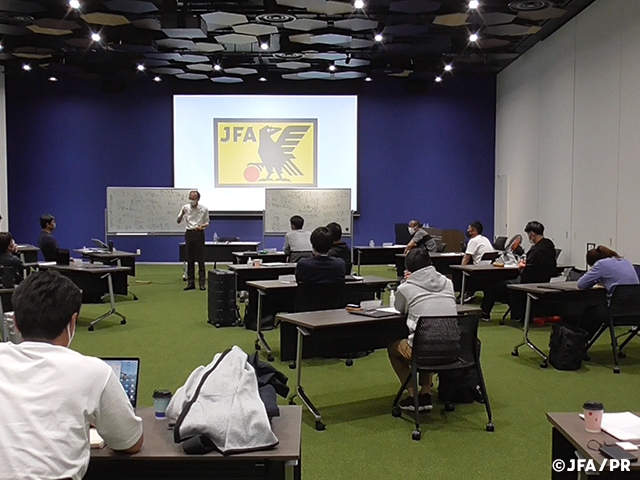 Following the six day short course of this year’s S-Licence Coaching Course, the first intensive course took place at Prince Takamado Memorial JFA YUME Field from Monday 19 April. Throughout the course, the lecture hall was kept ventilated, while basic prevention measures were implemented to limit the risks of spreading the infection. 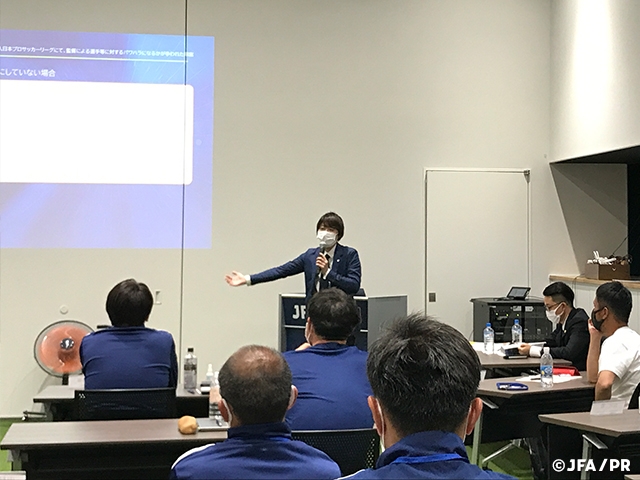 The S-Licence Coaching Course was held in Chiba from this week, and under a blessed weather, coaching sessions and lectures were given at the Prince Takamado Memorial JFA YUME Field. After all participants gathered at the facility, President TASHIMA Kohzo gave us a speech regarding the activities carried out by JFA. I was very inspired by the story of how Mr. Dettmar CRAMER came to Japan. Dispatched from the Western German Football Association in 1960, all expenses were owned by the Western German side, providing Japan with a complete free roll. Many years later, JFA is now dispatching coaches to Asian countries and regions. It may make other Asian countries stronger, but the story of paying the deed forward was very inspiring. This episode made me reaffirm that giving is more important than receiving. This course also reminded me that in order to provide knowledge to the players, I must continue my learning and broaden my knowledge as a coach.

Another story that impressed me was the episode from the 2018 FIFA World Cup Russia™. We looked back on the tournament by watching a short film which covered the story of the coach change and the team’s way to the round of 16. I cannot fathom the difficulties and pressure the coach must have felt at the time. JFA has always cherished the virtue of fair-play, and that turned out to be the difference in the tournament, as Japan advanced through the round of 16 by receiving fewer yellow cards than Senegal, who were tied in points with Japan. However, it came with the decision to waste playing time while being down 0-1 against Poland at their final group stage match.

The film introduced the interview of Coach NISHINO Akira saying, “I was very reluctant to make that decision.” The coach Nishino was also seen looking up at the sky saying “What did we lack…” after suffering a loss to Belgium. I was getting the impression that the coach might already had a clue to his question.

I think that the play model and philosophy as a coach are the same as the philosophy of life itself. Despite his busy schedule, Coach MORIYASU Hajime, the current coach of Japan National Team, made his appearance and expressed words of encouragement and gratitude for the participating coaches. The words and actions of the person who is in charge of the national team contained tremendous energy.

The coaching session resumed on Tuesday morning, where we touched on the seven themes, and I felt very grateful for this environment where I can see and hear the coaching styles of various coaches. The instructors provided us with feedbacks from various angles, questioning us if our game analysis was really correct? Are we really focusing on the improvements of the players? How is the balance between reality and clarity? These are all great questions that allows me to gain new learnings each day. The participants will try to be more aware of these aspects as we go on with this course.

In the afternoon, we were given an in-depth lecture on “Sport Integrity” by the instructors from Ray Law Office. During this lecture, we were taught with a method where we think for a minute before holding discussions, which was a very helpful technique that I would like to implement in my future activities. Coach Bruno GARCIA of the Japan Futsal National Team gave us a lecture on his coaching methods with great enthusiasm, and we thank him for taking time out of his busy schedule. Professor USAMI Makoto of Kyoto University, who will be back next week, followed by giving us a lecture on the theme of “Brain-storming.”

Words cannot describe all the things we have learned this week and I am sincerely grateful to all the people who has give their support to make this course possible. It is very exciting to imagine how much I can gain from this course, both as a coach and as a person. However, while I strive to become a better coach, I must not forget who I am and always think whether or not I would do the same if I were a coach leading a J.League club. 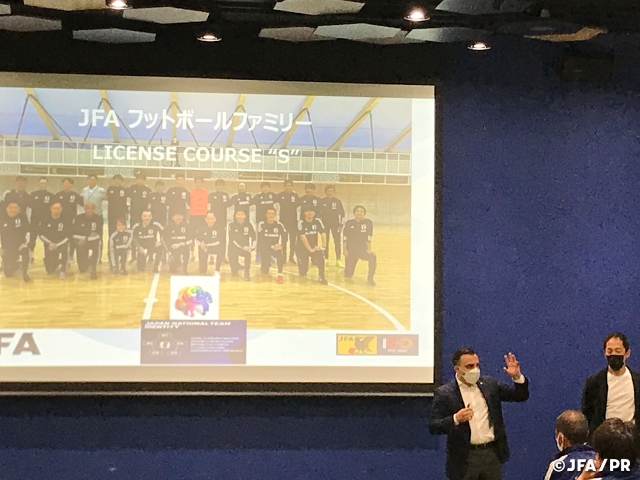