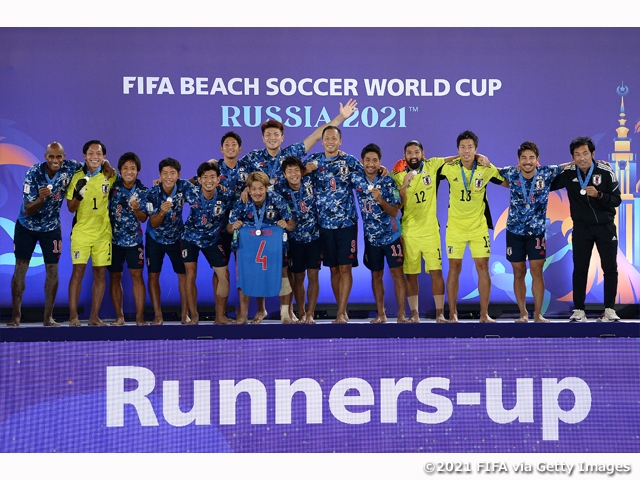 The Japan Beach Soccer National Team, who have reached the final for the first time at the FIFA Beach Soccer World Cup Russia 2021™, squared off against the host nation Russia on Sunday 29 August.

Japan conceded the opening goal in just eight seconds at the group stage, where they lost 1-7 against Russia, but the team displayed great composure to start off the final, as player-coach MOREIRA Ozu applied aggressive pressure to build momentum for Japan in the early minutes.

However, it was once again the host nation who scored the opening goal, as Russia converted a bicycle shot in the fourth minute to take the lead. Japan earned a free kick near the opposing goal at the end of the first period, but the attempt made by OBA Takaaki failed to capture the target, as they finished the first period trailing by a goal. 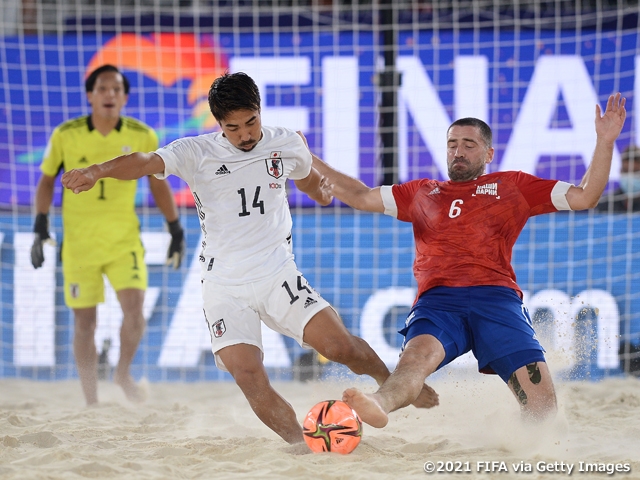 Kicking off the second period, Japan scored the equaliser in their first play, as AKAGUMA Takuya scoped the ball to Moreira, who returned the ball to set up the bicycle shot of Akaguma that found the back of the net.

Despite getting back to equal terms, Japan conceded back to back goals to Russia, both from a freekick, giving Russia a two goal lead. Akaguma converted a PK in the fifth minute of the second period to bring Japan back within a goal, but Russia scored another goal in the seventh minute to enter the third period with a two goal lead.

In efforts to rally back in the final 12 minutes, Japan created numbers of chances, but saw their attempts being denied by the superb saves made by the Russian goalkeeper. Conversely, Russia effectively utilised their time while converting another goal in the 11th minute of the third period to put the final nail in the coffin. With the final whistle, Russia claimed their third World Cup title with a 5-2 victory over Japan. Despite losing at the final, Japan concluded the World Cup with their best ever finish. 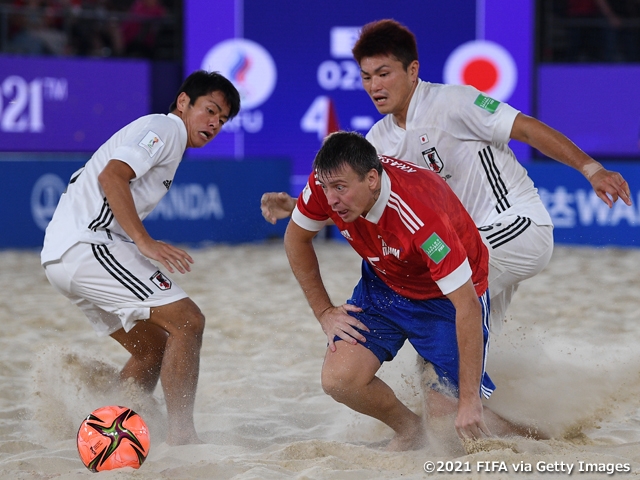 Following the match, Oba shed his tears while reflecting on the tournament, “It is disappointing, but I am proud of what we accomplished as a team. Although we were not able to win at the end, the journey continues, so we must reset our minds and move forward. Thank you so much for all the support.”

At the closing ceremony, Akaguma was named as the Bronze Scorer (third in scorer ranking) with his 10 goals. The Japanese players who appeared on the podium as the runners-up received the medal and proudly raised it with a radiant smile. 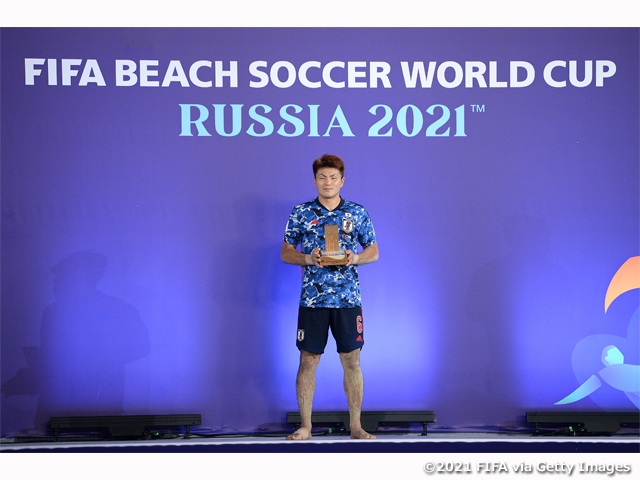 FP #10 MOREIRA Ozu, Player-Coach (Tokyo Verdy BS)
We entered the match telling each other to finish off the tournament with a smile regardless of the result, so despite finishing in second place, I was very happy that we were able to believe in ourselves and compete as a team until the very end. With the team reaching the final for the first time, our desire to win the gold medal became stronger than ever before. There was always pressure of representing Japan, but because I was entering this tournament as a player-coach, I was feeling twice or three times more pressured than usual. Looking back on myself as a player, along with the previous tournaments, there are some aspects that I am not satisfied with this time. However, in the previous tournaments, I was able to win individual awards, but couldn’t win a medal for the team. The team’s victory is the highest priority, so I'm really happy that everyone on the team played an active role to win a medal this time. Since taking over the coaching role last year, everyone understood my vision and showed great growth as a team. I’ve always thought that Japan can become a stronger team if they play with strong conviction and confidence. That was the two things this team had, and with the persistency of each player, we were able to make a deep run in this tournament. I feel grateful to be a part of this “family” and I am very proud of this “family.” On top of what we have been working on, I will continue to give my utmost efforts to build a strong Japan National Team.

GK #13 SHIROTA Yu (Loewe Yokohama)
Although I was out of the squad for the three group stage matches, I was ready to play at all times. The goalkeepers were aware of each other’s conditions throughout the tournament. I was thinking that my ability to make saves would come in handy for the team at the final, so I was fully prepared to play. When I was called up to play at the World Cup final, I wasn’t nervous or anxious anymore, and I just wanted to contribute for the team’s victory within the time I was given. I was able to take a good shot, but the opposing goalkeeper made a fine save. I was given the opportunity to face a PK in our semi-final match against Tahiti, but I was very disappointed when I wasn’t able to make a save for the team. I love this game, so I felt very fortunate to be able to step on the pitch at this world stage. However, whether it’s the World Cup final or a regular season match at the Kanto League, my job is to defend the goal, so I will continue to fulfil my duty at any given time.

FP #6 AKAGUMA Takuya (Lazo Apego Kitakyusyu)
This was my fourth World Cup appearance. In the past tournaments, the senior players led the way for me, but at this tournament, I was committed to take on the leadership role and showcase a strong performance that can make a difference for the team. I am very happy to have won the medal. I was overwhelmed when we stepped on the pitch at the final. We knew that this was going to be an away-match for us, but we were able to hear the chants coming from small groups of people who were rooting for us, and their voices were being heard. Personally, I wanted to win the golden boot, so I am a bit disappointed. It was also disappointing to lose at the final, but I felt truly happy when we stepped on that podium. Although I was not able to achieve my goal of winning the gold medal and the golden boot, I received so many words of encouragement and messages from so many people, that made these tireless two years worthwhile. We will now return to Japan, reset our minds so that we can help our team win the national title.

FP #7 OBA Takaaki (Loewe Yokohama)
We were able to make history by winning a medal, and I am happy from the bottom of my heart. However, when we lost at the final, I was very disappointed and burst in tears because I wanted to bring back the gold medal to all the people who has supported us over the years. Russia was a strong team with enormous bench strengths. Although we were able to put up a good fight, we simply didn’t have what it takes to win the match. It reminded us that we need to focus on raising the “competition level” through the domestic competitions. Our strengths lie on our techniques, such as our delicate ball touches and the quality of movements. Japan also consists of flexible players who can make strategical adjustments on the pitch, depending on the flow of the game. The fact that we finished in second place shows that the quality of our game was not enough, and we need to improve our understanding of the game in order to become a stronger team. My personal goal is to continue to be selected to the national team and to win the World Cup next time. I also hope to give my contribution to promote the sport and have more people know about beach soccer. We will continue to strive to become a player or a team that can be supported by many people in order to convey the beauty of beach soccer, and help promote, develop, and raise the competition level of the sport.

FP #11 OKUYAMA Masanori (Loewe Yokohama)
We made adjustments from our first match against Russia, but the away atmosphere and the difference in experience played a major role at the final. We started off this tournament by conceding the opening goal, and despite all the adversities, we were able to make a deep run with the technical support of coach Ozu and coach Tabata, and the mental support of the reserve players. The team staffs also gave their utmost efforts to prepare us with the best possible environment, which allowed us to compete with a peace of mind. I personally wanted to score more goals to contribute for the team, so that is an aspect I regret the most, but I am glad that we were able to achieve something we have never done before. The environment surrounding the final was beyond my imagination, with a full stadium, perfect weather, and beautiful sky. I feel very honoured to be able to play the World Cup final under such wonderful environment. It’s been over six years since I started playing beach soccer, and as a kid who started playing football since primary school, I was overwhelmed when I stepped on the pitch of an international competition hosted by FIFA. At the same time, I got emotional thinking about the players who couldn’t make it here. I was overwhelmed thinking about the predecessors who led the sport, including Mr. Ramos and all the other senior players. I am also grateful for my family and all the people who supported us during this Covid pandemic.