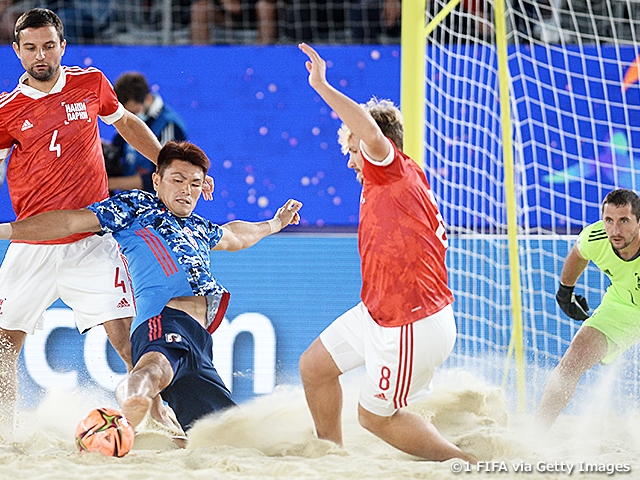 After clinching the knockout stage with their win over USA, Japan entered this match with the group lead at stake. With Paraguay winning over USA in a match played earlier this day, Russia was in a position where they needed a win to advance through.

The opening goal came within the first 10 seconds, as a shot deflected off the knee of MOREIRA Ozu ended up being an own goal to give the host nation an early lead.

The Japanese players showcased plays that lacked concentration and were overwhelmed by the speedy pass works displayed by the Russian side, as coach TABATA Teruki later reflected, “The team might have been sitting on their laurels after clinching the knockout stage.” The team conceded goals from a volley shot and a bicycle shot in the third and eighth minute respectively, finding themselves in a 0-3 hole after the first period. 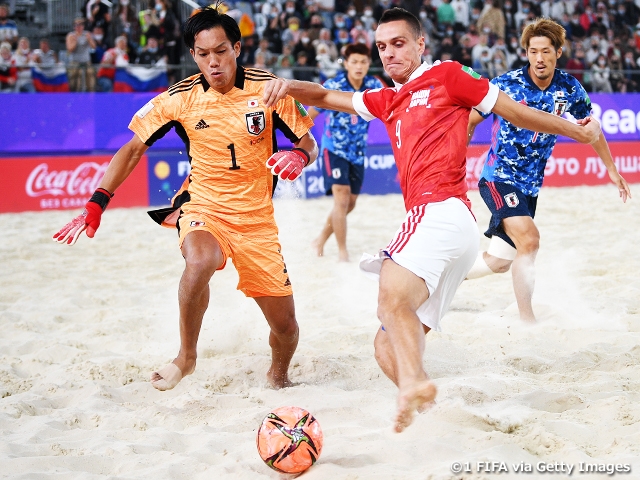 Russia opened the third period by scoring a goal in just four seconds, before adding another goal to their tally in the 27th minute, extending their lead to six goals. Goalkeeper GINOZA Tomoya, who was introduced to the match after the team conceded their sixth goal, brought rhythm to the team with his quick feeds. In the 32nd minute, AKAGUMA Takuya scored Japan’s first goal with a bicycle kick, before earning a PK in the 34th minute. However, the shot taken by Akaguma struck the cross bar, denying him from scoring his second goal of the match.

With Russia scoring another goal before the final whistle, Japan lost the match 1-7. As a result, Russia will now move onto the knockout stage as the group leader, while Japan advances as the runners-up. Japan will face Tahiti, the leader of Group B, at the quarterfinals on Thursday 26 August. 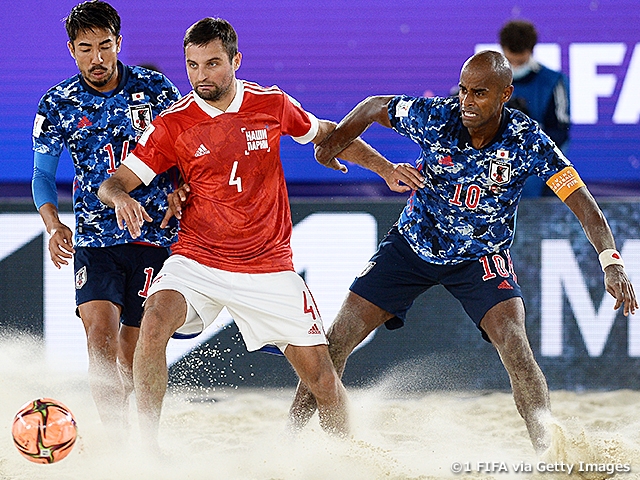 FP #10 MOREIRA Ozu (Tokyo Verdy BS)
Although we lost to Russia, I am glad that we were able to come from behind in the first two matches to clinch the knockout stage. We have faced Tahiti several times, and we know that they are a tenacious team who are determined to win. I think it is an optimal matchup for Japan, but it will certainly be a tough match. We will use the next two days to reset our minds and prepare ourselves for our match against Tahiti. Although we lacked the experience of playing against foreign teams, the team has shown great improvements through this tournament. The level of competition will be even higher from this point on, and every team will be striving for victory, so a simple mistake can cost us the tournament. It is important that we play with confidence and give our best efforts on the pitch, so that we don’t leave any regrets.

GK #12 GINOZA Tomoya (Sol Mar Praia Okinawa)
We entered this match with the intention to get our payback from last time but ended up with another disappointing result. We must not over think this loss and try to move forward while making the necessary adjustments. Including the training matches, we have been conceding the opening goal in our recent matches, but we have also shown great resilience to come from behind. Tahiti has finished second in the World Cup, and I have the impression that they are a very skilled team. We will continue to communicate with each other to strive for a victory. Personally, I feel that I gain momentum by speaking out during the game, so I will try to stay vocal and allow my teammates to play comfortably. We will work hard as a team and strive to make a deep run at this tournament.

FP #6 AKAGUMA Takuya (Lazo Apego Kitakyusyu)
I have been able to compete at this tournament in great condition. Now that we have reached the knockout stage, the real competition starts from here. It is disappointing that we lost to Russia, but we only have two days until our next match, so we must reset our minds. This is my World Cup, but the goal scored against Russia was the first time I scored with a bicycle kick, so that give me great confidence moving forward. I will continue to strive to score more goals upfront and help the team make a deep run. The only way to have no regrets at this tournament is to win the title, so we will give our best efforts to win each match ahead of us.