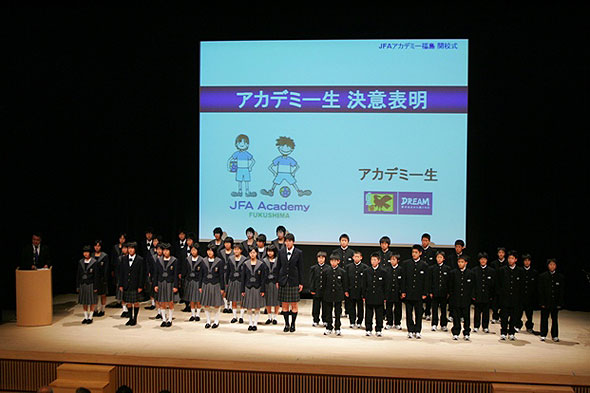 We are using the word "Elite," which is rarely used in Japan today.

We feel Japanese people have a strong resistance to the word.But we dare to use it.

The feeling of such resistance could be derived away from what the word originally means.The original meaning of the word "Elite" is never the privilege class but a leader who is obligated to lead and contribute to society.

The post-war education in Japan was directed to popularization and equalisation.Although it was necessary in that era, people say social leaders are currently short and voice our need of nurturing them. Some countries have already begun elite education nationwide.

There are the words － bottom-up and pull-up."Bottom-up" literally means to raise the level from the bottom."Pull-up" is a way of thinking to develop the entire society by providing learnings from the elite education.

The Japan Football Association set a clear objective as "JFA 2005 Declaration" announced on 1 January 2005, stating that it gathers 5 million registrars and its national team become one of the top 10 teams in the world by 2015 and hold the World Cup tournament in Japan and the team become the champions by 2050, in order to realise the philosophy to "create rich sports culture through football and contribute to the mental and physical development of people and the development of society.And it was not declared merely as the Japan Football Association's goal but as a promise mutually made with people around Japan.

We have worked hard to improve the level of the foundation as a main direction.The result of that apparently has been produced to some extent.And now, we have become keenly aware of the necessity to find a way where both the foundation and elite education can coexist in order to step further for the newly designed objective.

Recently you can see some cases where other sports or non-sports fields have strict training from the early ages of children.

While some people recognise they are appropriate depending on their category, the others may frown at such approaches.We need to analyse such a resistance.

We had continued discussions on areas to focus on and appropriate approaches for each age group from a perspective of "how to nurture in long-term view" by doing research on characteristics of child development after understanding characteristics of football competition.We came up with the conclusion that we have a lot of things to have children work on ? football and other activities outside football.A child is not a small adult.There is an appropriate approach for each age group.On top of that, it's important to provide the best possible environment and coaching for each.

When you build up a complete team at each stage of primary, junior high and high school, so-called "development by bundle," it has harmful effects at times from a standpoint of long-term player development.Many players end their football career before taking advantage of their potential.Ideally, children are supposed to be nurtured based on the same vision and concept from a long-term perspective even though they move from one team to another. And we are always aiming at that, but it is not easy to achieve.The consistent coaching system has significance in that sense.

We have had an active involvement in youth development for many years and realised that the younger players are, the bigger potential they have.We strongly feel that it is important to give a good environment and opportunities to children to let their potential blossom.

Another sense of resistance against Elite comes from a sense of discrimination that those who are not selected feel.

Children take time to grow up with various stimulations at different paces depending on each individual.It is not the end even if there are children who are not selected at younger stages.It never judges that they are not going to be successful.We believe prospects who forge the future of Japanese football emerge from such groups.Conversely, children who are selected at early ages are not necessarily promised with a bright future.If they are selected for the programme, it does not mean all of them can become a professional footballer.We would like make sure that students and adults around them understand those facts.That's why we are trying to implement programmes that help students succeed globally in other fields as well.

Under the concept of "pull-up", we think we can raise the level of others and the whole Japanese football by raising the level of one portion.In this way, the scope and depth of the whole football world including the foundation are expanded. And we have great hopes not only on the mere direct meaning of the words above but also that the expansion greatly helps Japan's national team aiming for world's top 10.

We aim to create opportunities where children can be given good environment and good coaching during their certain spell in the process of growing up through significant young ages.We earnestly wish that parents understand such a concept.