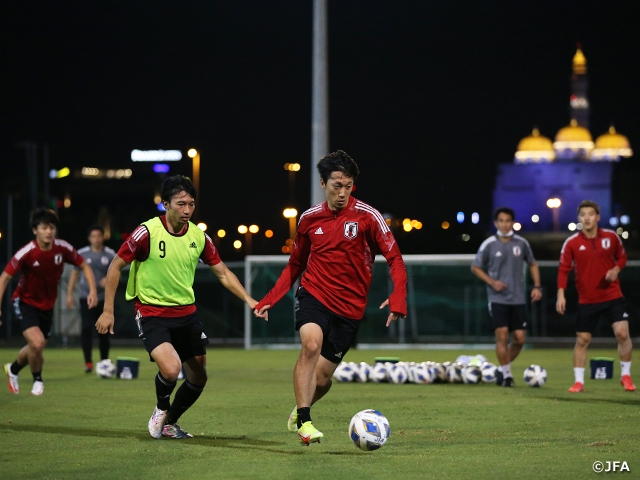 Following their 1-0 victory over Vietnam at Hanoi, the SAMURAI BLUE (Japan National Team) took a six hour red-eye flight to Muscat, Oman, where they will play their sixth match of the FIFA World Cup Qatar 2022™ AFC Asian Qualifiers (Road to Qatar) against the Oman National Team.

After arriving in Muscat in the morning, the team spent their time recovering from the match and the long travel, before resuming their trainings in the evening, as coach MORIYASU Hajime prepped up the players by telling them, “The match against Oman will be even tougher than the match against Vietnam, but let's keep on trying to win and move on.”

The players who played against Vietnam left the session early after taking a light jog to work up a sweat. Players who didn’t play in the match trained with great enthusiasm to make a case for themselves for the upcoming match. The team will train three more times before facing the Oman National Team on Tuesday 16 November. 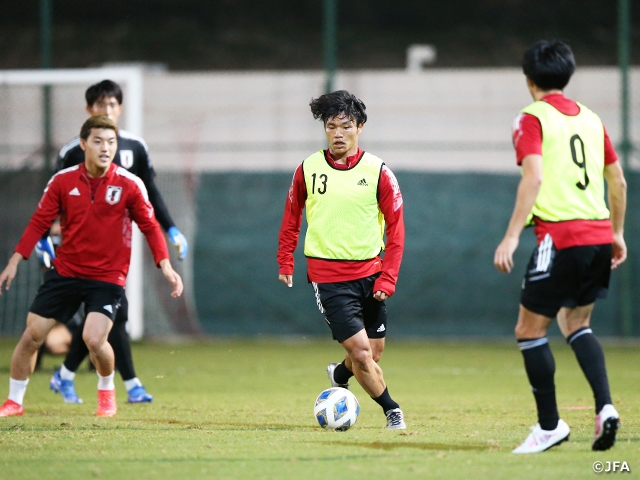 DF YAMANE Miki (Kawasaki Frontale)
I'm relieved that we were able to win Vietnam because it was a match we couldn’t afford to lose. It is regretful that I was a bit stiff in the first half. Although I was able to calm down in the second half, I realise that I had to be able to play like that for the whole 90 minutes. It was the first time for me to play in the final round of the Asian qualifiers, and I was feeling a great amount of pressure. However, I knew that the greater the pressure, the greater the joy when you win, so I fought with the intention of enjoying the moment. As a team, we failed to capitalise on many opportunities, and it made me feel that we need to work even harder to be more critical in the final third. Our next match against Oman is fast approaching, so we must focus on adjusting our conditions within the given time frame.

DF HATATE Reo (Kawasaki Frontale)
This was my first call up to the Japan National Team, and the atmosphere was different from the matches I usually play, so I felt nervous just watching the match. We have a lot of fun in training, but there is a sense of responsibility and pressure that comes with it, making it a very fulfilling experience. Watching the match against Vietnam made me even more motivated to play in the match, and I will work hard every day so that I can be selected into the line-up. The team played with a 4-3-3 formation, which is the same system we use at my club, but it doesn’t mean that I can incorporate what I usually do just because it's the same system. However, it makes it easier for me to showcase my style of play, and I was visualising how I would play if I were on the pitch while watching the match. I was also impressed by the performance showcased by the players playing overseas, who had limited time to prepare, and it was very inspiring to watch them.

DF NAKAYAMA Yuta (PEC Zwolle/Netherlands)
I entered the match against Vietnam while the team had a 1-0 lead, so I focused on keeping the clean sheet, stabilising the defence, and helping the build-ups. I also entered with Asano to provide fresh legs for the team, but we tried not to rush our plays just because we were fresh. After dropping the first match in the series held in September and October, I really wanted to help the team win both matches in this November series. The fact that we were able to start off with a win over Vietnam gives us great confidence heading into our match against Oman. I personally am not feeling the difficulties of the AFC Asian Qualifiers. I trust the veteran players to navigate us through any obstacles, so as a youngster with limited experience, I will just focus on giving my utmost effort to complete the task in front of me.

MF/FW FURUHASHI Kyogo (Celtic FC/Scotland)
I entered the match against Vietnam as a late substitute, but I played with the intention of exploiting the space behind the opposing defence and scoring a goal. I play as a striker for my club, and I feel like that is the position that suits me the best. I have been communicating with coach Moriyasu regarding many things, and I feel that he trusts me, so I would like to repay him with results. The team has not been scoring many goals throughout this final round, so I will play with the intention of making more runs into the space and create more opportunities for the team. 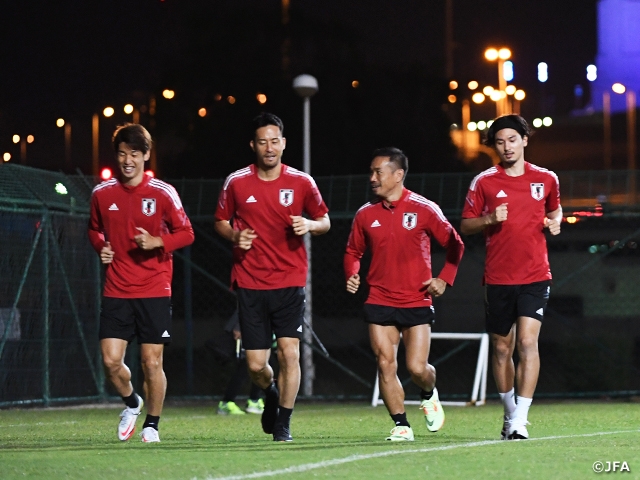