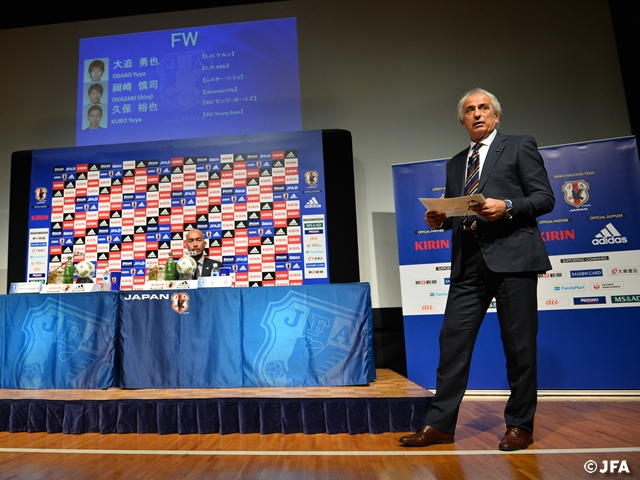 On Friday 4 November, the coach of SAMURAI BLUE (Japan National Team), Vahid HALILHODZIC, announced his squad for the Kirin Challenge Cup 2016 against Oman (on 11 Nov. in Kashima) and the fifth match of the 2018 FIFA World Cup Asian final qualifiers against Saudi Arabia (on 15 Nov. in Saitama). Some of the younger players who have been in prime form including forward OSAKO Yuya (1.FC Koeln/Germany) who is playing superbly in Germany’s Bundesliga, midfielder IDEGUCHI Yosuke (Gamba Osaka) and forward KUBO Yuya (Berner Sport Club Young Boys / Switzerland) are newly added to the squad.

Ideguchi, who played in the Rio de Janeiro Olympics this summer, joins the top national team for the first time in his young career. Kubo, scoring 10 goals for his team in this season so far, makes his debut in the Halilhodzic squad. The last time he was called up to the top flight was February 2012.

On the other hand, Osako, who has been playing in every match of his club’s this season, got listed again after he made the last appearance in the Asian second qualifier match against Singapore in June last year. KOBAYASHI Yuki also returns to the national team for the first time since the Kirin Cup this June. 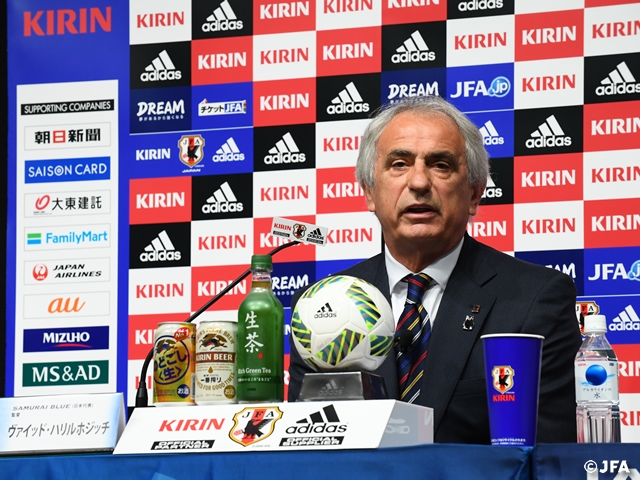 Coach Halilhodzic points out his intention to revitalize the team, saying “I wanted to refresh this group by bringing in younger players”. “Oman have some similarities to Saudi Arabia. In the match against Oman, we can also give opportunities to the players who haven’t had the occasion to play much with us yet or those overseas players who had limited playing time in their respective clubs and check on their current form”, added the boss.

First four matches have finished already in the final qualifiers. Saudi Arabia are leading the group B with three wins and one draw totalling 10 points, while at second place are Australia who have earned eight points with two wins and two draws. Japan are trailing Australia by one point with two wins, one loss and one draw so far. Automatic advancement to the World Cup will be given to two best countries in the group, and the third-placed team will have to go through a playoff match against a representative of the North and Central America and the Caribbean region (CONCACAF). The win against Saudi Arabia is highly anticipated in the last national team match in this year.

Halilhodzic says “the contest against Saudi Arabia will be an important one. We have to make sure without any doubt to play with aggressiveness and strong determination. And we will go all out for the win.”

The team will start their training camp in Ibaraki Prefecture on Sunday 6 November.

The match against Oman is scheduled to kick off at 19:20 on Friday 11 at Kashima Football Stadium, while the one against Saudi Arabia is at 19:35 on Tuesday 15 at Saitama Stadium.

Vahid Halilhodzic, Coach of SAMURAI BLUE (Japan National Team)
Considering we had a few injuries in the last camp in October, we invited one more player each in the midfield and upfront to control the risk and assembled a slightly larger group this time. Also I wanted to refresh this group of players by bringing in younger players. The squad members playing overseas have got chances to start in their matches recently. In addition, we have a friendly against Oman, so I believe we don’t have to worry about the fatigue from the trip. We can also give opportunities to the players who haven’t had the occasion to play much with us yet or those overseas players who only had limited playing time in their respective clubs and check on their current form. I suppose we can show better performance in the second match against Saudi Arabia.

Saudi Arabia have improved greatly. Individually they have very talented players. They are physically strong, and recently their tactics have got better. More than anything they have advantage where they can call up almost whomever they want for every training camp they plan. The key is to limit their individual skills in offence, while showing our style football on the pitch. They also have weaknesses so we want to exploit them.

There is no choice for us left but to win against the group leaders Saudi Arabia. We have to play with momentum and a strong mindset, telling ourselves the next win will be worth six points. It will be a crucial one. We have to make sure without any doubt to play with aggressiveness and strong determination. And we will go all out for the win.