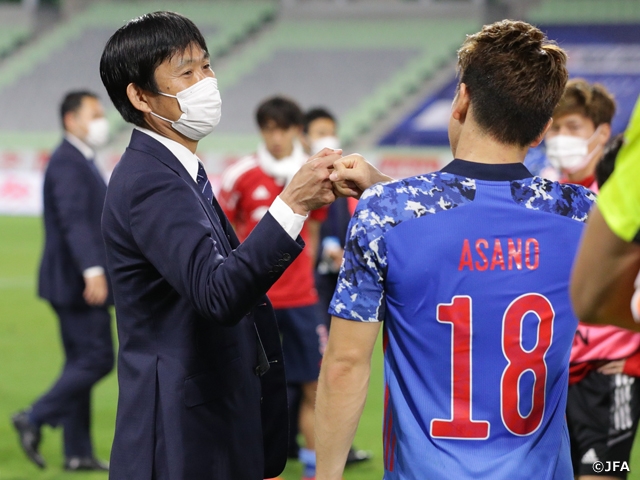 With the Tokyo Olympics just around the corner, coach MORIYASU Hajime of the SAMURAI BLUE (Japan National Team) is about to face his first challenge.

The “Tokyo generation,” who were in the “U-20” category in 2017, are now in the “U-24” category as the Olympic Games were postponed due to the corona-pandemic. With the team being brought up through an “One-team two-categories” approach by coach Moriyasu, where they were being developed along with their older-brother figure, the SAMURAI BLUE, the coach’s goal of “Winning the gold medal” sounds a lot more feasible now.

The team stabilised their defence and was dramatically improved welcoming YOSHIDA Maya, SAKAI Hiroki, and ENDO Wataru, as the “over-age” players ahead of the Olympics. The team was already loaded with offensive talents, such as DOAN Ritsu and KUBO Takefusa, and the stability in defence allowed their attackers to thrive even further.

However, the high expectations for the team’s success at this Olympics are not solely coming from the reputations of the players. The biggest reason is because coach Moriyasu’s philosophy has pervaded the team, allowing them to showcase the most valuable virtue of Japanese football, which is the spirit of “Making runs and fighting for the team and teammates.”

“We are thankful to all the people who are supporting our activities.”

When making an appearance in a press conference or public interviews, coach Moriyasu always starts his comments by expressing his gratitude. And his words are not superficial. Hearing him thank specific personals, from the tournament sponsors to staffs who prepared the match venue, you can tell that his words are genuine. It must be something he shares with his players in their meetings as well.

There are also ways to express one’s “gratitude” through a “mission.” Even during difficult times, many people are making tireless efforts to carry out the activities of the Japan National Team because everyone believes that the activities of the team have the power to bring positive vitality to Japanese society.

Then, the Japan National Team have the obligation to believe in their teammates, work together as a team, and showcase a performance that touches the hearts of the viewers. No matter how difficult the situation is, they must fight until the final whistle. Coach Moriyasu has mentioned that he “hopes to deliver energy and courage to people all over Japan” through such performance.

Seeing the amount of enthusiasm he carries when sharing his gratitude in front of the media, it is not hard to imagine that he talks the same way to his players. The “Moriyasu-ism” has thoroughly pervaded the current Japan National Team and U-24 Japan National Team. It is because the players share the same beliefs as coach Moriyasu that they can grow significantly both as a team and as individuals ahead of the Olympics and the World Cup, which is approaching a year later.

Mistakes are part of the game of football. There are matches where things do not go your way. But those are the moments when the “base” of this team: “Run for the team. Fight until the end,” comes into effect.

Of course, coach Moriyasu has his own football vision and tactical ideas to compete against the world. However, if you just pursue the tactical aspects of the game, you will become a soulless “robot.” Because the basic principles of the “Moriyasu-ism” have pervaded on top of the team’s tactics, and because the players are facing the same direction, they are capable of competing at the world stage.

Coach Moriyasu turned “gratitude” into power. But his gratitude is not superficial. I think that his sincere gratitude has brought the team together, and as a result, created a big force.

I wish coach Moriyasu and the U-24 Japan National Team all the best at the Olympics.