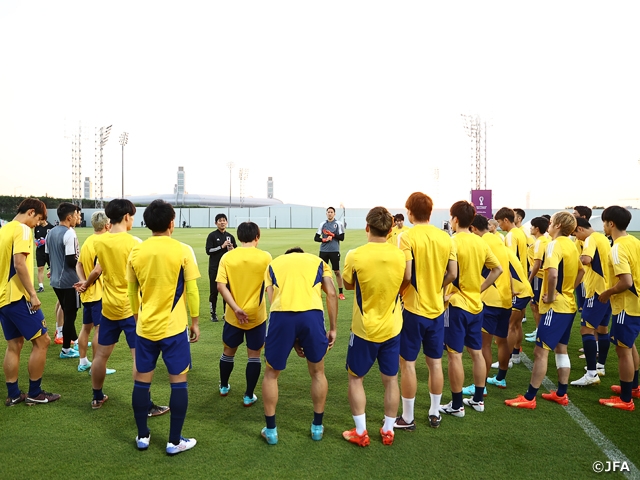 On Tuesday 22 November, one day before their first group stage match against Germany at the FIFA World Cup Qatar 2022™, the SAMURAI BLUE (Japan National Team) held an official training session and press conference in Doha. Head Coach MORIYASU Hajime appeared in the press conference where he shared his aspiration for the match, saying, “We are very much looking forward to it. We want to show what we have built up over the years and deliver our best performance.”

Japan will compete in Group E alongside Germany, Costa Rica, and Spain in an attempt to reach the quarterfinals for the first time in their seventh consecutive and overall appearance at the FIFA World Cup™. Having been placed in the same group as two former champions, the first match will undoubtedly have a significant impact on the team's chances of moving on to the knockout stage.

Ahead of the big match, coach Moriyasu commented, “The players and staff have prepared very well. We want to show what we have built up over the years and deliver our best performance,” marking the match as the culmination of years of preparation since taking over the helm in August 2018.

Team captain YOSHIDA Maya (FC Schalke 04) also appeared in the press conference, where he shared his enthusiasm by saying, “We want to give everything we’ve got and see if we can put up a fight against a former champion. It would be great if we can deliver an upset to surprise the world.” 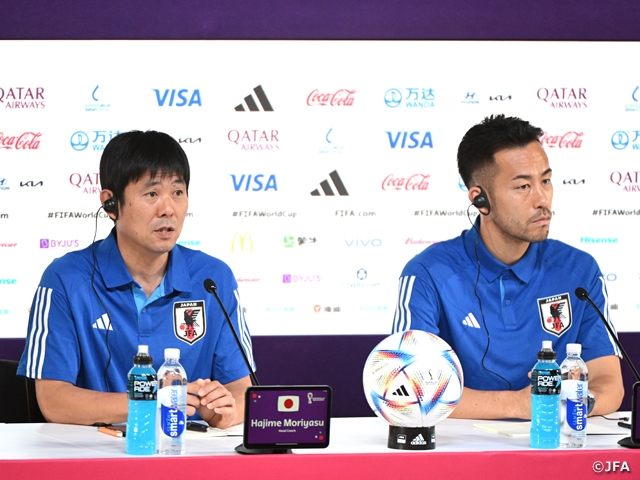 The team had a string of injuries and illnesses prior to the tournament, but all 26 players were spotted in training on this day, with coach Moriyasu saying that, “They are all ready and available for team selection.”

The training session was held in the evening, as the players showed up at the training ground of Al Sadd in front of a sizable media group. As in the last few days, the session was held behind closed doors except for the first 15 minutes, during which the players were seen going through their warmup routines. Veteran defender NAGATOMO Yuto (FC Tokyo) showed great enthusiasm to fire up his teammates, while KAMADA Daichi (Eintracht Frankfurt), ENDO Wataru (VfB Stuttgart), MORITA Hidemasa (Sporting CP), and SHIBASAKI Gaku (CD Leganes) were in good spirits as they engaged in a passing drill. 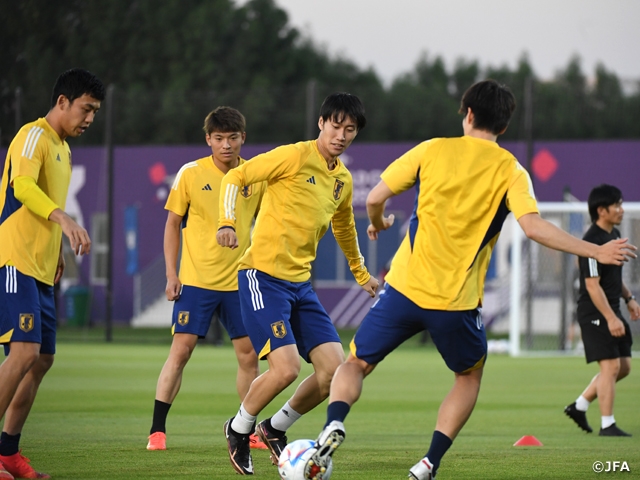 The session was closed to the media soon afterwards, as the team went over their strategies for their match against Germany on the following day.

Germany, who Japan will face in their first group stage match, won Group J of the UEFA Qualifiers under Head Coach Hansi FLICK, who assumed control in August 2021. They qualified for their 18th consecutive and 20th overall World Cup with a 9-1 record with 36 goals scored and 4 goals allowed, which was second only to England in the qualifiers.

At the official press conference, Coach Flick commented, “Japan has players like Kamada and Endo who play in Germany, so we have quite the challenge ahead of us tomorrow,” while also sharing his confidence ahead of the match, “We were able to train well in the past few days. We are in a very competitive group, but we welcome the challenge.”

Germany are ranked 11th in the FIFA rankings, compared to Japan's 24th. Japan's record against Germany is one draw and one defeat, and they will meet for the first time since May 2006, when they drew in a friendly match held prior to the 2006 FIFA World Cup Germany™.

The circumstances have changed quite a bit since then, with majority of the players playing for Japan now playing in European leagues including Germany, as Coach Moriyasu mentioned, “I hope the players can confidently demonstrate what they have attained in the topflight leagues around the world.”

TANIGUCHI Shogo (Kawasaki Frontale) shared his take on the match, “There are certain things we have built up under coach Moriyasu. The starting eleven and the players on the bench are determined to do what we can, so that we can explode at kick-off. I think everyone is facing the same direction to fight as a team.” 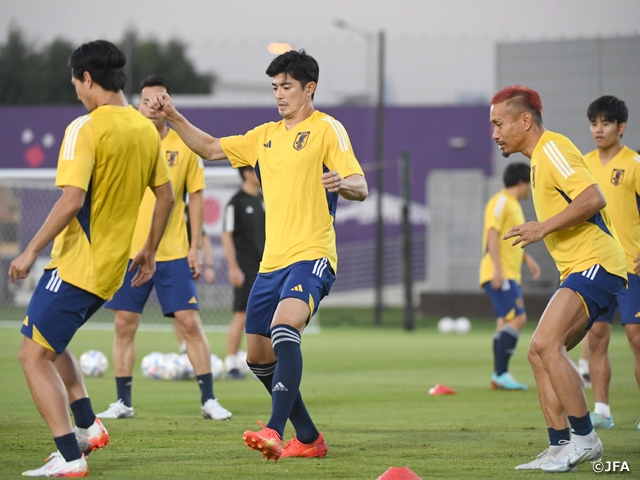 The match between the SAMURAI BLUE and the Germany National Team will kick-off at 16:00 local time (22:00 Japan time) on Wednesday 23 November at Khalifa International Stadium in Doha.

Following the match against Germany, Japan will face Costa Rica on Sunday 27 November and Spain on Thursday 1 December. The top two finishers in each group will advance to the knockout stage.