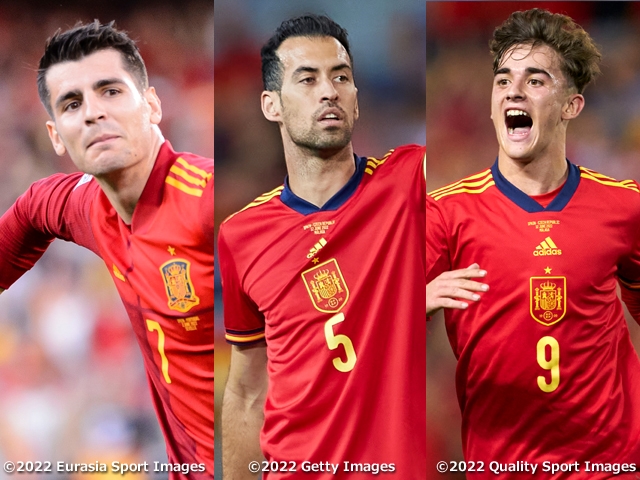 Three consecutive victories in major international competitions, UEFA EURO 2008, 2010 FIFA World Cup South Africa™, and UEFA EURO 2012, marked the golden age for Spain, as they dominated the competition with their signature passing football. However, the team has gone through a gradual decline since their peak and was eliminated in the group stage at the 2014 FIFA World Cup Brazil™. They reached the round of 16 in the previous World Cup but lost to Russia in penalties after dominating the entire match. Andres INIESTA (currently playing for Vissel Kobe) declared his retirement from the national team following this match.

Despite their struggles in the recent years, the European powerhouse has shown positive signs that their transitional period may finally come to an end. At the UEFA EURO 2020 held last year, they advanced to the semi-finals before falling to eventual champions Italy in a penalty shootout. They also won the silver medal at the Tokyo Olympics, where the team's deep run was aided by six players who competed in EURO 2020. The team lost to Sweden in the ensuing World Cup qualifiers, but ultimately managed to take first place with a record of 6-1-1.

The flag-bearer for Spain's next generation of players is Pedri (FC Barcelona), who will celebrate his 20th birthday during the FIFA World Cup Qatar 2022™. Other key players in their early 20s include attackers Ferran TORRES (FC Barcelona), Dani OLMO (RB Leipzig), and centre-back Eric GARCIA (FC Barcelona), while 18-year-old GAVI (FC Barcelona) is another rising prospect that needs to be mentioned.

On the other hand, the team also has a number of veteran players who provide stability, including Sergio BUSQUETS (FC Barcelona), KOKE (Atletico Madrid), and Jordi ALBA (FC Barcelona). Under Head Coach Luis ENRIQUE, who has played in three World Cups as a player, including the 2002 FIFA World Cup Korea/Japan™, the team has refined its traditional passing football to reach new heights.

Nevertheless, it has been pointed out that their dominance in ball possession does not always translate into goals, especially when facing solid defence from their opponents. Even in the 2010 World Cup, which they won, Spain scored only eight goals in seven matches. The key to their success will depend on whether the likes of Alvaro MORATA (Atletico Madrid) and Pablo SARABIA (Paris Saint-Germain FC) can replicate the role played by their country’s legendary strikers such as David VILLA and Fernando TORRES.