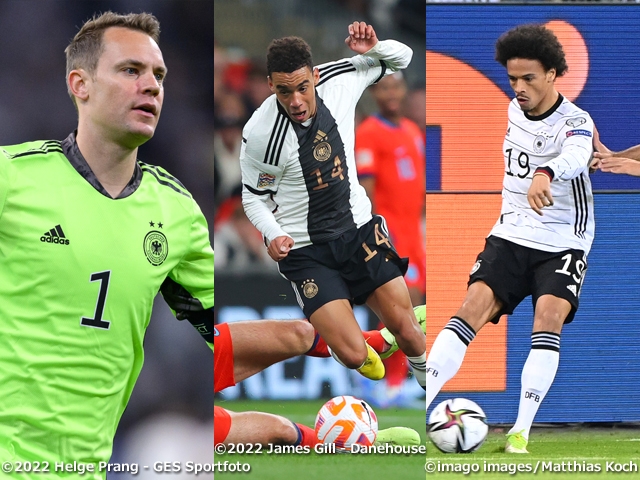 Even though Germany boasts four FIFA World Cup™ titles (including the West Germany era), second only to Brazil and tied with Italy, it has not always been plain sailing. In fact, they have suffered several upsets in the past. Most memorable in recent years was at the last 2018 FIFA World Cup Russia™, where they lost 0-2 to Korea Republic and was eliminated at the group stage for the first time in German football history.

With that memory still fresh in their minds, one can well imagine that they will be keen to redeem themselves when they face the SAMURAI BLUE (Japan National Team) in their opening match of this year's FIFA World Cup Qatar 2022™. Furthermore, this time there is even a sense of urgency, unlike four years ago when they entered the tournament as the defending champions. After being eliminated in the round of 16 at last year's UEFA EURO 2020, they earned their ticket to Qatar with a 9-1 record in the qualifiers under newly appointed Head Coach Hansi FLICK but have struggled in the eight matches they have played this year up to September, winning just two, while drawing five and losing one.

However, if the talented players, motivated by the team’s circumstance, can come together and demonstrate their strength, they ought to be able to make significant strides toward winning back the world title. The backbone of the team is based on the players from FC Bayern Munich, who Flick coached until last year, which include goalkeeper Manuel NEUER, offensive and defensive linchpin Joshua KIMMICH, and veteran striker Thomas MULLER. In addition, Leroy SANE and Serge GNABRY provide more firepower from the flanks, while 19-year-old Jamal MUSIALA is also looking for an opportunity to play.

Of course, there are other gems in every position apart from the Bayern players. The front line is led by Kai HAVERTZ, who scored in last year’s UEFA Champions League final to help his club, Chelsea FC, win the title. Defensive midfielders who are likely to be partnered with Kimmich are Ilkay Gundogan (Manchester City FC) and Leon GORETZKA (FC Bayern Munich), both of whom are excellent players in their own right. They also consist of solid centre-halves, Antonio RUDIGER (Real Madrid CF) and Niklas SULE (Borussia Dortmund) locking down the goalmouth.

While these players made the 26-man squad as expected, Youssoufa MOUKOKO (Borussia Dortmund), whose 18th birthday was on 20 November, received a surprise call-up. He made his debut for the national team in their last pre-tournament match against Oman on 16 June. Mario GOTZE (Eintracht Frankfurt), who scored the decisive goal in the 2014 FIFA World Cup Brazil™ final against Argentina, also returned for the first time in two tournaments.

As many of the players play for top clubs in Europe, the team consists of players with excellent skills, all of whom are capable of using their passing skills to take control of the game. Even when they lose possession of the ball, they are able to work in tandem to regain possession and lead a quick attack to overwhelm their opponents. However, as in the aforementioned match against Korea Republic, there is a risk of them failing to score despite their dominance. Therefore, the first match is going to be a key indicator in measuring how well Germany will fare in this tournament.