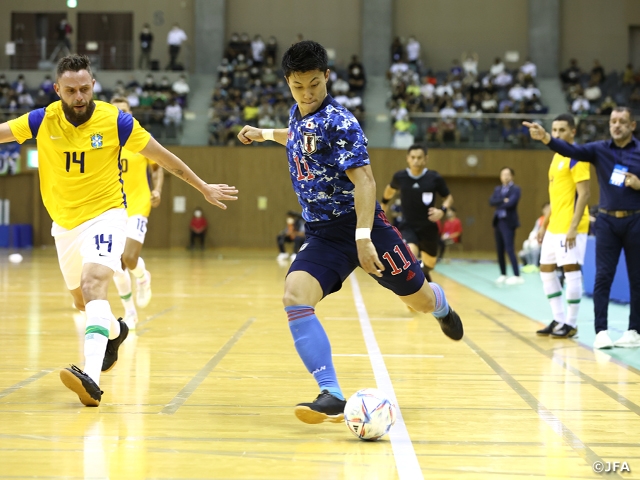 Japan started the match by displaying a man-to-man coverage against the South American powerhouse, as coach KOGURE Kenichiro commented, “We had Oliveira man-mark Pito in this match.” Led by the shot taken by Hirata in the third minute, Japan created number of opportunities in the early minutes, but couldn’t quite find the back of the net. 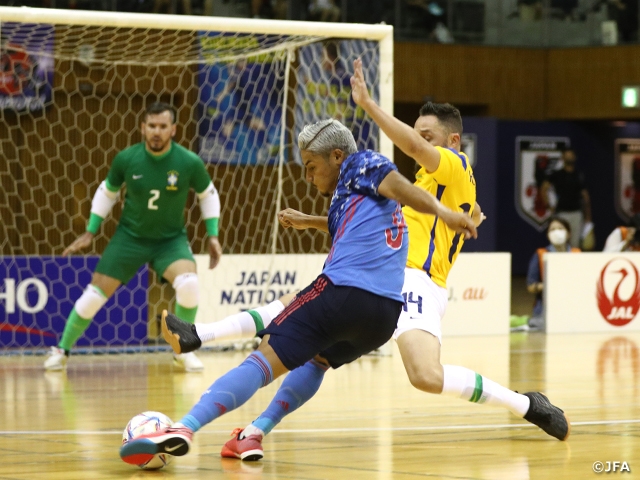 Brazil also created chances to threaten the Japanese goal, including the shot taken by Matheus in the seventh minute, but Kuromoto made a fine save to deny his attempt. Despite the efforts showcased by Japan to keep the match scoreless, Brazil scored the opening goal in the ninth minute, when Matheus broke through the right side before slotting the ball through the legs of Kuromoto to take the lead.

Unlike the first match, where Japan lost all of their momentum after conceding the opening goal, Japan continued to show great aggression to create chances in this match. However, the shot taken by Hirata was denied by the Brazilian goalkeeper RONCAGLIO, while Mizutani couldn’t make good contact with the ball in a close opportunity, as the match entered halftime with Brazil leading by a goal.

As in the first match, Japan started the second period with PIRES Higor (Bardral Urayasu) in goal. In the 25th minute, SHIMIZU Kazuya (Fugador Sumida) created a chance to allow Yoshikawa to take a shot, but his attempt was blocked by the opposing defender.

In the 28th minute, Brazil initiated a counterattack that threaten the Japanese goal, but Pires came up big by making three consecutive saves to deny the shots taken by the Brazilian players. 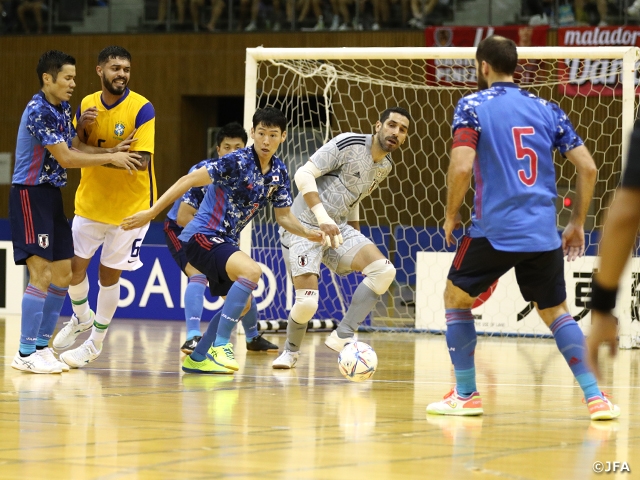 Although Japan showed great patience to keep the match close, Brazil captured the second goal in the 31st minute, when Rodrigo played a nifty wall-pass with Pito before sending a shot into the net. A minute later, the individual effort showcased by Pito induced an own goal to further extend the Brazilian lead.

A close opportunity was created by Japan in the 35th minute, when Hirata responded to a shot-deflection caused by KANAZAWA Sora (Tachikawa Athletic FC) but couldn’t capitalise on the situation. Conversely, Brazil converted their opportunity from a counterattack to make it 4-0.

Japan did manage to score a goal in the closing minutes, when Oliveira scored his second goal of this series from a powerplay, but Brazil responded right back with the goal scored by Roncaglio with 23 seconds left on the clock. As a result, Japan lost back-to-back matches against Brazil with the score of 1-5. 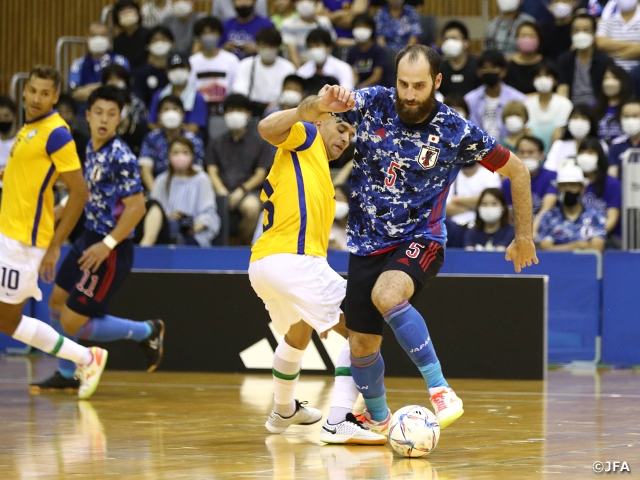 KOGURE Kenichiro, Head Coach (Japan Futsal National Team)
I think we were able to display a different performance from the first match until the last 10 minutes of the match. The players fought courageously. As in the first match, we have to learn, especially the young players, that the margin of error is very slim when playing at this level. To be able to play against such a strong side for a total of 80 minutes in two matches is exactly what we had planned and is a necessary part of the process of achieving great success. We are looking forward to further preparing ourselves for our next target, the AFC Futsal Asian Cup Kuwait 2022™, where we will strive to become champions for the first time in eight years.

GK #2 KUROMOTO Guilherme (Tachikawa Athletic FC)
Brazil was really strong, and I am grateful to be given this opportunity to play against them here in Japan. We lost the first match because we were overwhelmed by our opponents and entered the match poorly, but I think we were able to learn from that match to showcase a better performance today. The result is the same 1-5, but the details are very different. With the World Cup approaching in two years’ time, this match reminded us that we need to get better. We hope to make the most of this experience and try to showcase the kind of performance we showed until the last 10 minutes of today’s match at the Asian Cup.

FP #9 HIRATA Neto Antonio Masanori (Nagoya Oceans)
Although we played much better compared to the first match, we ended up with the same result. Despite being able to keep the score at 0-1 midway through the second period, we lost our grip on the match after conceding the second goal. In order to compete at world level, we need to be able to fight back to score goals in the face of adversity. I feel like we were able to gain a great learning experience ahead of the Asian Cup, so we hope to make the most of these matches to become a better team.

FP #11 SHIMIZU Kazuya (Fugador Sumida)
These matches really reminded us that the team can have a completely different look depending on how we execute our gameplan. It also proved that what we have built up through the East Asian qualifiers were not effective against Brazil. It gave us an opportunity to think about how we should approach the upcoming Asian Cup and the World Cup. I personally felt that I need to make more adjustments to fit into the team and be able to possess the ball in the attacking third against strong opponents like Brazil. We will review and analyse these matches and strive to improve ourselves ahead of the Asian Cup.

Marcos XAVIER, Head Coach (Brazil Futsal National Team)
Japan have made various adjustments from the first match, notably in the way they made Oliveira man-mark Pito. We noticed this change as soon as the match started, so we deliberately kept Pito on the pitch as long as possible in order to tire Oliveira out. In matches like these, the direction of the match is determined by how effectively the strategy outperforms the opponent. We also had to be patient and use our wits to get through the difficult stints, especially in the second half. The Japanese team is very young and will take time to mature. Still, I think these two matches have been very good for them. I will be rooting for their success at the Asian Cup.