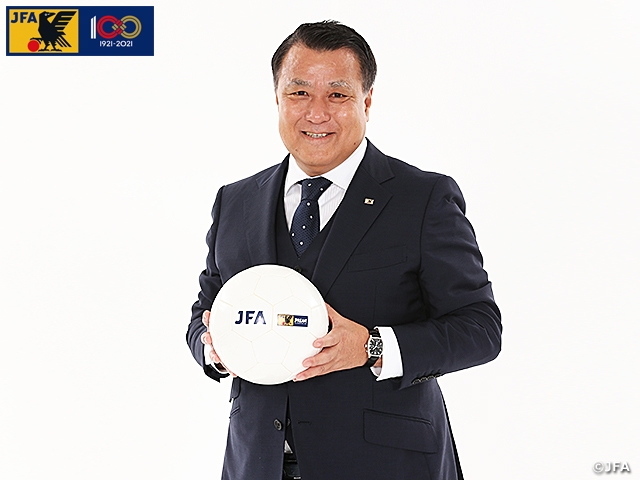 NOZU Yuzuru, the fourth president of the Japan Football Association (JFA), wrote a book entitled Nihon Sakka no Ayumi [The History of Japanese Football] to commemorate the 50th anniversary of the JFA’s founding. In this book, he commented that, “While the Japanese football world has numerous issues to address, I hope that as many people as possible will attain a state of selflessness and achieve greater humanity through the following five footballing experiences.”

These five experiences are: obeying the rules, making the impossible possible, witnessing harmony between the team and the individual, being a good loser, and finding true friendship through sports.

After Japan's defeat of the powerful Swedish team at the Berlin 1936 Olympic Games, Japanese football fell into a prolonged slump. It was ridiculed as being just a collector of fair play awards, and JFA President Nozu bemoaned the JFA’s malicious moniker, “the Eternal Loser Association.” However, our predecessors always maintained their respect for the game of football and set their goals high.

In 1960, Japan invited the West German coach, Dettmar CRAMER, to take over the National Team, which then went on to defeat Argentina and reach the quarter finals of the football competition at the Tokyo 1964 Olympic Games. The team subsequently won a bronze medal at the Mexico City 1968 Olympic Games, and picked up fair play awards from both FIFA (the Fédération Internationale de Football Association) and UNESCO (the United Nations Educational, Scientific and Cultural Organization). These awards were in recognition of the Japan team’s exemplary conduct both on and off the pitch.

Japanese supporters are often recognised for picking up rubbish in the stands after matches. As well as winning the 2011 FIFA Women’s World Cup Germany™, Nadeshiko Japan also won the tournament's fair play award. Samurai Blue, the men’s National Team, tidied up their dressing room before departing from the 2018 FIFA World Cup Russia™, after losing to Belgium. We have passed down from generation to generation the spirit of Japanese football, in which we pride ourselves on pursuing fair play in our quest for victory.

The J.League was launched in 1993, with the goals of improving the National Team and creating a new sporting culture in Japan. The clubs took a community-based approach, producing many players through broadening the reach of football. The launch of J.League, Japan's first FIFA World Cup™ appearance in 1998, and co-hosting the 2002 FIFA World Cup Korea/Japan™ with Korea Republic - these historic milestones have helped spread football in Japan and as a consequence, football gradually became a part of our culture. Today, there are many Japanese footballers playing for European clubs. Moreover, the World Cup—once a dream within a dream—is now a tournament in which we aim to reach at least the quarter-finals.

Footballers need to perform with freedom, discipline, and dedication. The basis for such play comes from a logical approach to the game and the willingness to take on new challenges without fear of failure. I also believe that such traits are what people often look for in others in our society today.

Japanese football must continue to develop talented individuals who are willing to compete at the global level and nurture them to become global leaders through the power of football. The WE League, which commences in this September, will lead the way for women’s sports. We hope that it will help create a new era of diversity and a society in which everyone can express their own identities and capabilities.

Since last year, the COVID-19 pandemic has had a significant impact on football. However, we must not stand still. The JFA will improve its governance in order to further build on our organisational strengths and trust. We will also create a new membership system by accelerating our digitalisation process in line with the times, and will realise the promises outlined in The JFA Declaration 2005. We will continue to create an environment in which children—the leaders of the future—can enjoy football with smiles on their faces, and footballing families will be able to experience the wonder of football throughout their lives.

For the next 100 years, we will keep passing on the wisdom of our predecessors and will promote The JFA Ideal - “through football, we realise the full benefits that sports can bring to our lives – the soundness of our bodies, the expansion of our minds, and the enrichment of our societies.”