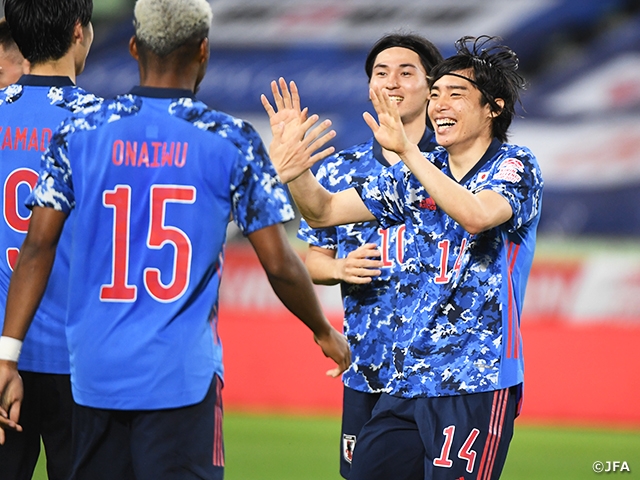 On Friday 11 June, the SAMURAI BLUE (Japan National Team) faced the Serbia National Team in the KIRIN CHALLENGE CUP 2021 at Noevir Stadium Kobe (Hyogo), where ITO Junya (KRC Genk) scored the decisive goal in the early minutes of the second half to give Japan a 1-0 victory.

For Japan, this was their first time facing a European side since facing Belgium at the 2018 FIFA World Cup Russia™, but the team entered the match without YOSHIDA Maya (U.C. Sampdoria) and two other players who joined the U-24 Japan National Team as over-age (OA) players for the Olympics, while also missing OSAKO Yuya (Werder Bremen) due to injury.

Entering the match without some of their key players in both offence and defence, coach MORIYASU Hajime elected to start the same defence line from their match against the U-24 Japan National Team on the 3rd, with GONDA Shuichi (Shimizu S-Pulse) starting in goal. It was FURUHASHI Kyogo (Vissel Kobe) who was named as the lone striker to replace Osako, with KAMADA Daichi (Eintracht Frankfurt), Ito and MINAMINO Takumi (Southampton FC) lined in the attacking midfield position.

While Japan made attempts to penetrate the space behind the opposing defence line, Serbia shifted their formation between three-back and five-back, adding layers in front of the goal to deny Japan from creating opportunities. In the 33rd minute, HASHIMOTO Kento (FC Rostov) delivered a pass to Ito who drove inside and struck a shot, but his attempt was blocked by the opposing GK.

With the team travelling to Japan without some of their key attackers like Dusan TADIC, Aleksandar MITROVIC, and Sergej MILINKOVIC-SAVIC, coach Dragan STOJKOVIC had mentioned to give opportunities for the younger players in this match against Japan. Dejan JOVELJIC and Milan MAKARIC created chances in the first half, but both attempts fell short from capturing the Japanese goal.

After seeing the first half ending scoreless, Japan made changes to bring in ONAIWU Ado (Yokohama F.Marinos) and KAWABE Hayao (Sanfrecce Hiroshima) to start the second half. In his first ever appearance with the SAMURAI BLUE, Onaiwu showed great intensity from the start, applying aggressive pressure against the Serbian defence line, which led to Japan earning a corner-kick in the early minutes of the second half. With Kamada sending the ball to the near-post, TANIGUCHI Shogo (Kawasaki Frontale) flicked the ball towards the far side, allowing Ito to convert the ball into the net. This goal scored by Ito was the 1,300th goal scored by the Japan National Team.

Following the opening goal, Japan started to show great composure with the ball, creating more chances upfront. With the Serbian side committing more numbers to their offence, Japan was able to take advantage of the open space behind the opposing defence line. In the 64th minute, Ito broke through the right flank and delivered a pass towards the box, allowing Onaiwu to make a sliding effort to send the ball into the net, but the play was called offside.

With momentum on their side coach Moriyasu sent out YAMANE Miki (Kawasaki Frontale), ASANO Takuma (FA), HARAGUCHI Genki (1. FC Union Berlin), and OGAWA Ryoya (FC Tokyo) after the hour mark. Although close opportunities were created towards the end, the goal scored by Ito turned out to be the only goal scored in this match, as Japan walked away with a 1-0 shutout victory against Serbia.

Prior to kick-off, a round of applause was given by both teams to honour the medical and essential workers who are on the frontline in the battle against COVID-19. The SAMURAI BLUE will now face the Kyrgyz Republic National Team on Wednesday 15 June in their final group match in the second round of the Asian qualifiers for the World Cup. 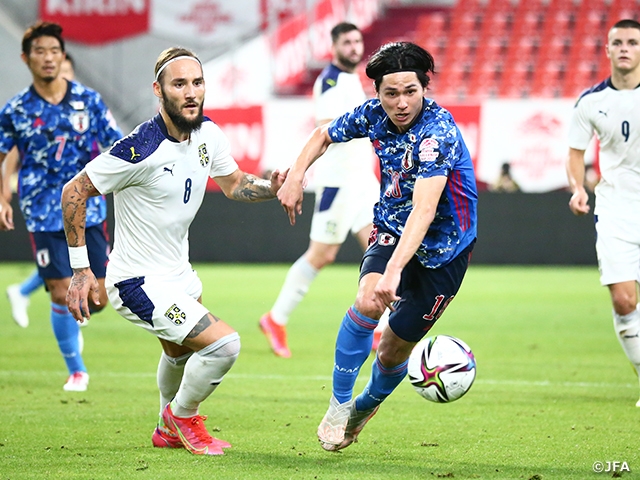 MORIYASU Hajime, Coach of SAMURAI BLUE (Japan National Team)
We are thankful to be given this opportunity to play football during this corona-pandemic. Although the match was played without any spectators, the players were feeling the support of many people. Through this victory, we hope that we were able to deliver joy and excitement to all the people watching at home and give courage to those who are struggling during this difficult time.

The players were testing the water in the first half, so I told them during halftime to pick up their pace in the second half. I didn’t have to say much, because the players were fully aware of what they lacked in the first half. The Serbian players played with great intensity and didn’t give us enough space nor time to create opportunities. They displayed great physical strengths at the individual level, while also showing great discipline to execute the team strategy. Facing such opponent, I was able to see how each player played under pressure and see whether or not they can control and possess the ball as they used to. I am very satisfied with the fact that we were able to walk away with a 1-0 clean sheet victory. It was also great to see our players showcase their will to score the second goal, rather than defending the one goal lead.

As the team is making changes from match to match, players are sharing both the positives and negatives from each match. They are striving to make the necessary adjustments to improve themselves, while also keeping the things that are currently working. I feel that we have been able to raise the overall level of this team, and it is showing in the results. I see that the players playing abroad and those who are playing domestically are always inspiring each other at the training sessions. It is my pleasure to see them compete and improve themselves during the camp, and it would be great if these training camps are becoming inspiration for the players to reach higher standards.

MF #14 ITO Junya (KRC Genk)
The goal came from a play we had been working in our training sessions, so I was anticipating for the ball to get flicked towards the far post. I didn’t know that it was the 1,300th goal for the national team. I am not the type of player that scores often, so I am glad I was able to score this time. It was something I have become accustomed to doing at my club, so it felt pretty natural. We knew the match was going to open up in the second half, and we were able to take advantage of the open space in the second half, but it would have been better if we were able to create more chances in the first half. The team is preparing for the final round of the Asian qualifiers. Regardless of who we face, we must give our best to win the match while also striving to reach a higher level as an individual.

MF #9 KAMADA Daichi (Eintracht Frankfurt)
Our performance in the first half was very disappointing. Although we were able to make the adjustments in the second half, we cannot compete against the world’s top teams if we play like that. Even when we are facing stronger opponents, we can still create big opportunities by carrying the ball up aggressively and making quicker transitions after winning the ball. Once we settle with the ball, we cannot initiate quick attacks. We still have lots to improve as a team, and I feel that the players must start taking the initiative to improve this team. It seemed like everyone changed their mind-set in the second half. We became more attack-minded and started to play the ball forward. We managed to score from a set-piece, and I am not sure if that second goal was actually offside, but nonetheless it was a wonderful sequence. We sometimes need to play scrappy in matches like these, and it is important that we continue to fight for the team until the final whilst. 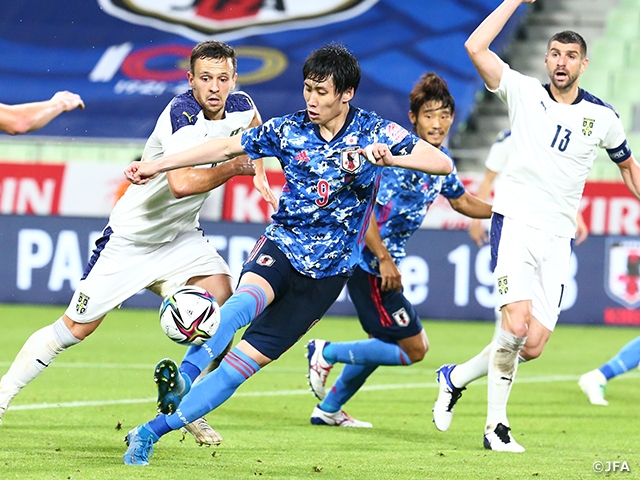 DF #5 NAGATOMO Yuto (Olympique de Marseille)
I think this was a great opponent to test our strengths. Serbia is a strong team and they looked ready and focused for this match. They came out laying a solid block in the first half, and we committed lots of mistakes while possessing the ball. However, the defence line did a great job to stay focused and manage the risks. Overall, I think we played extremely well today. Everybody was making quick transitions after losing the ball, which denied the opponents from initiating counterattacks. Although both teams were missing many of their core players, I think we were able to prove that we are capable of competing at a high level regardless of who is on the pitch. I was very satisfied with my performance today and I feel that this win has given us a boost to our confidence.

DF 6 TANIGUCHI Shogo (Kawasaki Frontale)
I was looking forward to seeing how I can coupe against a European side. There were areas where I did well and areas where I did poorly, but I was focused on giving my best at all times. We needed to make adjustments to effectively apply pressure against the opponent’s formation, so we kept shifting our defence line, which allowed us to force some good turnovers. When our opponent had five defenders dropping deep, we kept the ball moving to create space, which was something I had been doing at my club, so I knew what I was doing and was able to play with confidence. It has been a while since the last time I was called up to the national team, so I need to earn my spot by showing what I am capable of doing. Just like me, many players are fighting for their spot on this team, and I think that competition within the team has led to today’s performance.

Dragan STOJKOVIC, Coach of Serbia National Team
I would like to congratulate Japan for their victory. They were fresh, showed good combinations, and simply played better today. It was a good thing that we were able to give some of our younger players the opportunity to play, but they did not perform well enough to win this match. Japan was too strong. They were the dominant team and scored the goal while they had control over the match. The outcome could have been different if we had our best players, but we are not caught up with the results. Our goal is the World Cup qualifiers in September, and we were able to achieve enough results toward that goal. I am hoping for the future success of Japan as well. I have many good memories from Japan. It is very unfortunate that I couldn’t visit the cities in Japan because of the ongoing pandemic. I really wanted to visit my friends in Nagoya, but I will save if for next time when the pandemic is over.