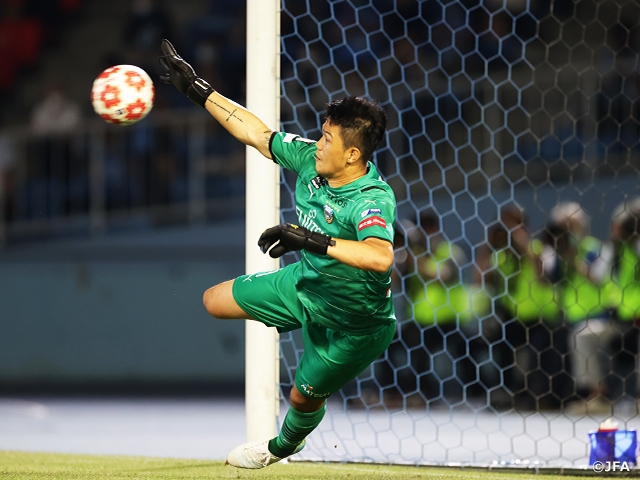 At Todoroki Stadium, defending champion Kawasaki Frontale (J1) faced AC Nagano Parceiro (Nagano). While Kawasaki tried to establish their rhythm by moving the ball around, Nagano came out with a man-to-man coverage, applying tons of pressure from the early minutes. Once winning the ball, Nagano utilised the long balls to initiate their counterattacks, giving Kawasaki very little margin for error.

Nagano’s aggressive approach gets paid off in the closing minutes of the first half, as they delivered a long ball down the right flank to MORIKAWA Yuki, who redirected the ball towards the box. With SAKAKI Shota fighting for the ball against Kawasaki’s Joao SCHMIDT, the ball was delivered to FUJIYAMA Tomofumi, who struck a superb shot that gave Kawasaki’s GK JUNG Sung-Ryong no chance, giving the lead to Nagano in the 42nd minute. 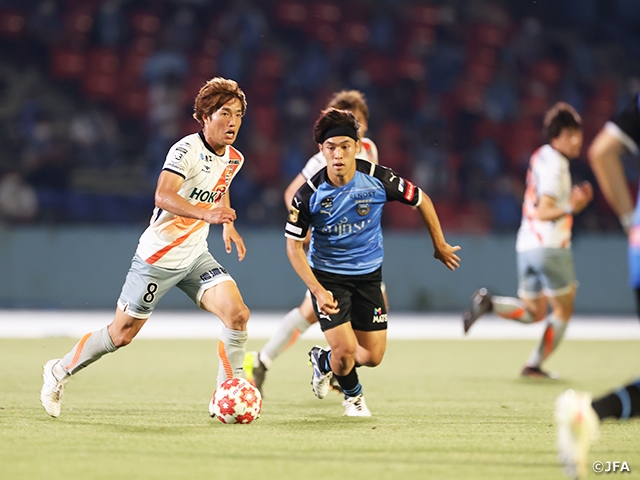 Despite trailing by a goal, Kawasaki stuck with their passing game in the second half. Nagano also continued with their man-to-man coverage and applied pressure from the frontline. The second half saw Kawasaki create more opportunities that threatened the opposing goal, but their chances kept getting denied by Nagano’s GK TANAKA Kengo and the wood-work.

In efforts to change the dynamics of the match, Kawasaki made several substitutions in the second half and started to dominate the ball possession. With less than 10 minutes left on the clock, Nagano was pinned down to their own territory, but managed to keep their one goal lead into additional time. However, the persistency of Kawasaki prevailed in the 91st minute, when TACHIBANADA Kento responded to a loose ball in front of the goal and struck a shot into the left corner of the Nagano goal, giving Kawasaki the long awaited equaliser. 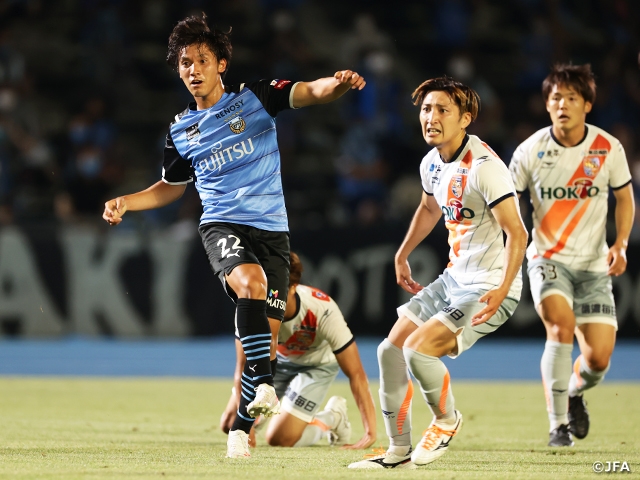 With momentum on their side, Kawasaki created multiple chances to win the match in overtime, but Tanaka made spectacular saves to send the match into PKs. However, it was Jung who shined in the shootout, as the Kawasaki GK made two saves to propel his side into the third round.

The remining fixtures of the second round will take place on Wednesday 16 June.

ONIKI Toru, Coach (Kawasaki Frontale)
I told my players to have pride as the defending champion. This will be our final home game until September, so we wanted to showcase a strong performance to our fans before heading into the ACL. The Emperor’s Cup is a very difficult tournament to begin with, but we made it even tougher on ourselves. However, the players never gave up and managed to equalise the match in additional time and won it in PKs. It is important that we learn and make the most of this experience. I must become a better coach and the players must strive to reach a higher level. We will work together to become a better team.

TACHIBANADA Kento (Kawasaki Frontale)
I was watching from the bench thinking that we need someone who can win the second balls to change the dynamics of the match. When I got shifted to the fullback position, I focused on keeping a high position, move the ball, and anticipate delivering balls to the attacking third. When I scored the goal, I was able to collect the ball at the centre and struck the ball as hard as I can. I am glad that I was able to score a goal in a tough match like this and contribute to the team’s victory. I haven’t scored a goal in a while, so I forgot how to celebrate, but if felt great for sure.

YOKOYAMA Yuji, Coach (AC Nagano Parceiro)
We were highly motivated to face a team that has led the Japanese football scene in the recent years. This was our third consecutive away match, including our league fixtures, so I elected to choose players who were in good condition. The player worked extremely hard, but unfortunately, we weren’t able to win the match. I told my players that we need to continue to strive for a higher level and work to make the most out of this experience.

TANAKA Kengo (AC Nagano Parceiro)
I haven’t played in an official match in nearly two and a half years, which was very frustrating, but I kept working hard to make progress and finally earned my opportunity to play, so I was determined to leave everything on the pitch. However, I blame myself for that last goal we conceded. I need to be more vocal to encourage my teammates, stop more shots, and contribute to the team’s victory. A big save can bring momentum to the team, and that is something I can do to help the team. I am determined to bring this team to J2, so I will try to feed off of this experience to prepare for our next match. Competition brings growth to the players, and I am still 31st years, so I will continue to fight to earn my spot on this team.