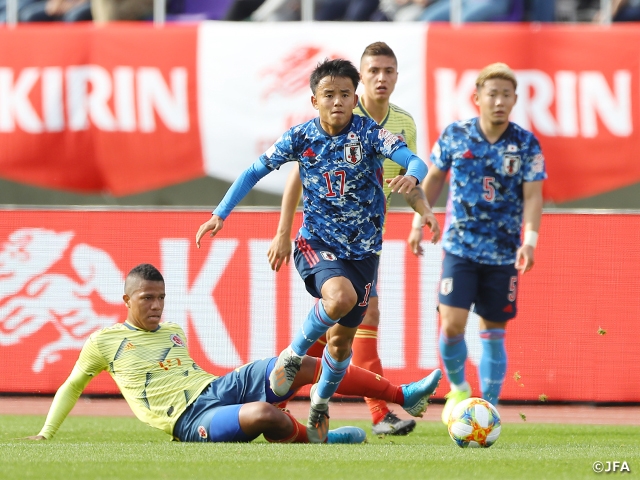 On Sunday 17 November, the U-22 Japan National Team faced the U-22 Colombia National Team in the KIRIN CHALLENGE CUP 2019 at EDION Stadium Hiroshima. Despite keeping a clean sheet in the first half, the team conceded two goals in the second half to lose the match 0-2. 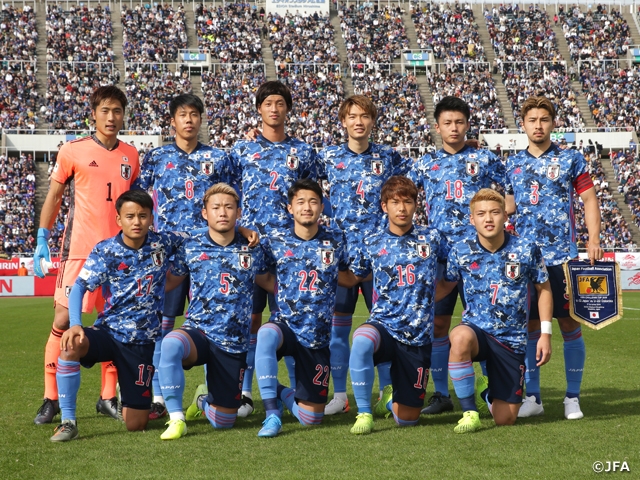 The match started with Colombia taking the initiative, as coach Moriyasu later reflected, “With this being a match we had to win, our players were feeling the pressure. We looked stiff in the early minutes and allowed the opponents to take control of the match.”

Despite their early struggles, Japan gradually picked up their pace, as Kubo and Doan led the offence to create opportunities. However, the match entered halftime scoreless, as both sides fell short to convert their chances.

To change the dynamics of the match, Japan brought in OGAWA Koki (Mito HollyHock) at halftime. However, the team conceded the opening goal in the 47th minute, when Colombia attacked from the left side, sending a cross towards the centre. Despite blocking off the initial delivery, the loose ball was collected by a Luis SANDOVAL, who snuck a shot passed the Japanese goalkeeper Osako. With Colombia picking up their pace in offence, another goal was scored in the 59th minute, when Juan RAMIREZ received the ball unmarked inside the box before striking a left footed shot into the Japanese goal.

In attempt to overcome the two goal deficit, Japan introduced MIYOSHI Koji (Royal Antwerp FC) and HARA Teruki (Sagan Tosu) in the 62nd minute and changed their system to a 4-2-3-1 formation. MESHINO Ryotaro (Heart of Midlothian FC) and MAEDA Daizen (CS Maritimo) were also brought onto the match in the 83rd and 87th minute respectively, but Japan’s efforts fell short from finding the back of the net, as Colombia walked away with a 2-0 victory at the KIRIN CHALLENGE CUP 2019.

After the match, coach Moriyasu shared his gratitude towards the match, “Ahead of the Tokyo Olympics, which is a celebration of peace, we are honoured to be able to hold our first friendly match here in Hiroshima. This was a very meaningful match, as we were able to send the message of world peace and create an opportunity to think about the world peace.” The coach also mentioned regarding the match, “Despite the wonderful atmosphere created by our supporters, we lacked mental toughness and failed to enter the match with aggression. This match has given us the opportunity to learn that we must improve in that aspect ahead of the Tokyo Olympics.”

The U-22 Japan National Team will temporarily end their activity, before getting back together for their KIRIN CHALLENGE CUP 2019 match against the U-22 Jamaica National Team on Saturday 28 December at Nagasaki.

MORIYASU Hajime, Coach of U-22 Japan National Team
With this being their first match played in Japan, the players were highly motivated and prepared well ahead of the match. However, despite the wonderful atmosphere created by our supporters, our players might have been overwhelmed by the pressure and expectation to win the match. We looked stiff in the early minutes and allowed the opponents to take control of the match. Following the match, I asked the player if the goal we are striving for is just a personal goal of mine or the team’s goal. We reminded each other that our goal is to win the gold medal at the Tokyo Olympics, and that we must improve ourselves to achieve that goal.

DF #4 ITAKURA Kou (FC Groningen)
With this being our first home game, we really had to win this match, so I am very disappointed with this result. There were so many things we could have done better. This was our first time playing in front of our fans in Japan, and I wish we could have showcased a better performance. We are striving to win the gold medal at the Tokyo Olympics, and we need to showcase a performance that embodies that goal.

MF #3 NAKAYAMA Yuta (PEC Zwolle)
There are many merits to play our matches in Japan, but at the same time, there are lots of pressure, too. However, as a member of the national team, we must overcome that pressure and earn results. That is something I learned from this match. We must feed off of this experience and utilise it to improve as a player.

MF #11 MESHINO Ryotaro (Heart of Midlothian FC)
At the time I entered the match, our team was losing, so I focused on adding an accent to our offence by initiating attacks with my dribbling skills. However, I didn’t have what it takes to score goals and help the team. I must become a player that can capitalise on limited opportunities. That is a quality I must develop in order to reach higher stages in my football career.

MF #17 KUBO Takefusa (RCD Mallorca)
As the result shows, we lost the match 0-2. We tried too hard to make our plays perfect and I feel like we could have taken shots more simply. The only positives we can extract from this match is that we are now feeling a sense of urgency. There is still time ahead of our next match, so we must all return to our clubs and work hard to become a better player.