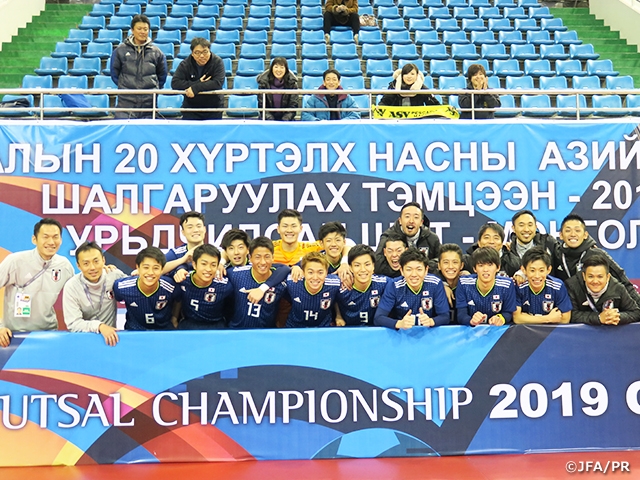 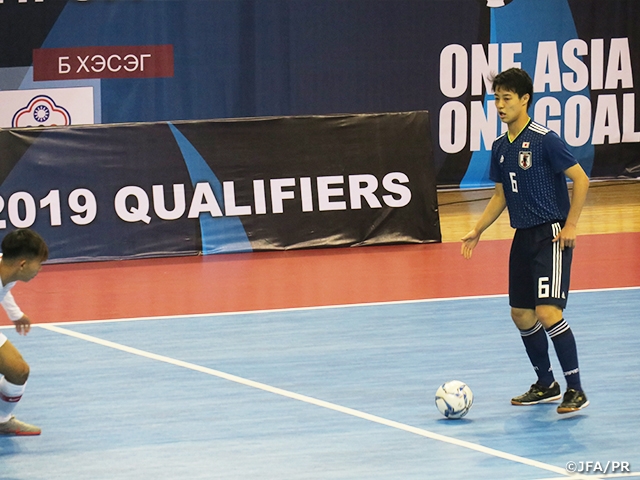 Japan had beaten Macau in their first match and they were in position to win out of the qualifiers with a draw or better in this match. Prior to the match, Japan’s Coach SUZUKI sent off the players by saying, “There may be times where the opponents will take control of the match, but you must keep your composure and anticipate for the opportunities. Let’s beat Hong Kong and get through the qualifiers.”

Carrying their momentum from their sweeping victory over Macau on the day before, Hong Kong showed great aggression to deny Japan from creating opportunities in the early minutes of the match. However, in the seventh minute, Japan opened the scoring when OTSUKA Hiroto, who scored a hat-trick in the previous match, captured the goal. Another player who recorded a hat-trick in their earlier match, YAMADA Jiei, extended the Japanese lead at the end of the first half, making the score 2-0 at half time.

The Hong Kong side who had to win in order to advance to the Championship, rallied back in the second half. At the start of the second half, they managed to cut the deficit in half by scoring from a freekick. Now with the momentum on their side, Hong Kong equalised the match just five minutes later, levelling the score line at 2-2. 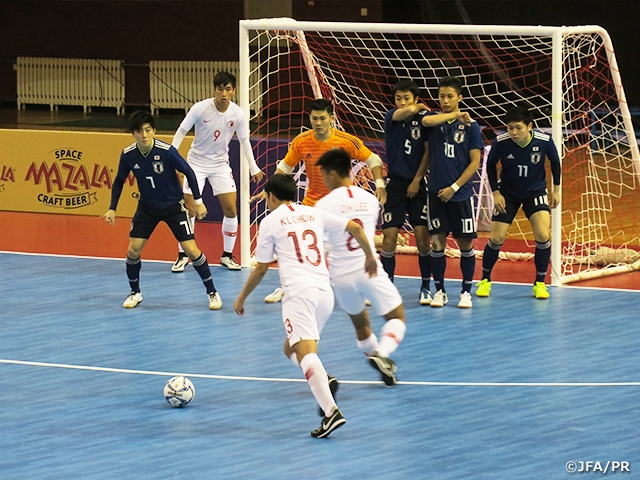 The second goal brought great joy to the Hong Kong side, however, Japan managed to keep their composure. Just a minute following the equaliser, Otsuka captured his second goal of the match to put Japan ahead once again. The match would enter a deadlock from there, but with their back against the wall, Hong Kong started to lose their composure and made numbers of unforced errors. Following a four-second violation committed by the opposing goalkeeper, Yamada sealed the deal by scoring the fourth goal off an indirect freekick. The match ended with a final score of 4-2 and gave Japan the ticket to the AFC U-20 Futsal Championship 2019.

The Japan Futsal National Team successfully won through the qualifiers, and a warm round of applause was given to the Japanese players after the match.

SUZUKI Ryuji, Coach
We have just qualified for the AFC U-20 Futsal Championship 2019. I would like to express my sincere gratitude to the players, staffs, and all the supporters of the U-19 Japan Futsal National Team. We will keep working hard to prepare for this competition which will take place next June.

FP #8 HASHIMOTO Reira (Okayama Sakuyo High School)
Today we qualified for the AFC U-20 Futsal Championship 2019 by beating Hong Kong. We have limited time before the championship, but I will work on my weak points and try to improve myself ahead of the tournament so that I can get called up to the team again.

FP #10 YAMADA Kaito (Agleymina Hamamatsu)
I am relieved to qualify for the AFC U-20 Futsal Championship 2019 by winning these two matches. We faced some difficult stretches, but we fought hard as a team and managed to earn the wins. Ahead of the tournament, I will work to develop my individual level so that I can get selected into the squad again. I will like to thank everyone who has travelled all the way to support us and everybody who were cheering for us from Japan.

FP #12 KIMURA Yuta (Espolada Hokkaido)
We have won the match against Hong Kong and qualified for the AFC U-20 Futsal Championship 2019. Thank you very much for your support. Unlike the previous match, we faced some difficult times as our opponents took control of the match for some stints. But we managed to stay patient and defend through those tough stretches, and ultimately that has given us this victory. Once I return to my club, I will keep working hard so that I can be called up to the national team at the championship.

FP #13 OTSUKA Hiroto (Yaita Chuo High School)
It was a very difficult match, but I am glad we managed to fight as a team and earn the victory. We still have many things to work on both as a team and as individuals, so once we all return to our country, we must all work hard to improve ourselves. I will give my best to return to this team for of the championship.

FP #14 YAMADA Jiei (Lido di Ostia/Italy)
Despite facing some difficult times, I am happy that we managed to go through the qualifiers by beating Hong Kong. Once I return to my team in Italy, I will continue to work hard so that I can be selected by the national team again.