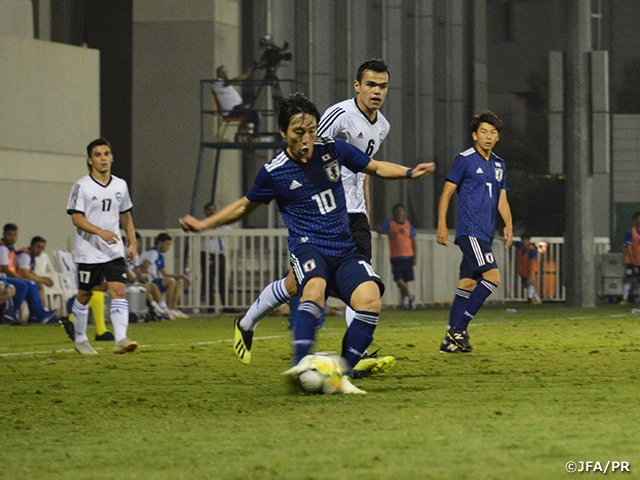 On Wednesday 14 November, the U-21 Japan National Team drew against the U-21 Uzbekistan National Team in their first match of the Dubai Cup U-23. The team gave up the lead twice in the match, but with the help of FUJITANI So and OGAWA Koki’s goal in the 17th and the 45th minute respectively, the team earned a point with a final score of 2-2.

For their first match of the tournament, Acting Coach YOKOUCHI Akinobu named KOJIMA Ryosuke in goal with OMINAMI Takuma, TATSUTA Yugo, and ITAKURA Kou forming the three-man defence line, while MATSUMOTO Taishi and NAKAYAMA Yuta taking on the defensive midfield role. FUJITANI So and SUGIOKA Daiki were placed in the flanks while MIYOSHI Koji and ITO Tatsuya played the offensive midfield with OGAWA Koki at top. 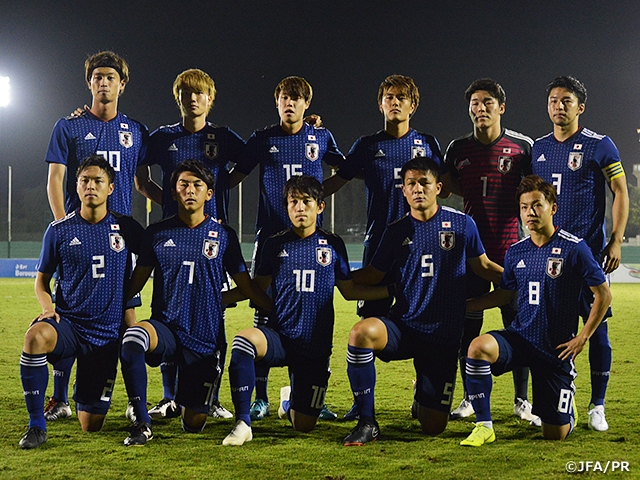 The match saw Japan taking control of the ball in the early minutes, but it was Uzbekistan who struck first. In the 14th minute, Uzbekistan forced a turnover in the midfield and initiated a counter attack. A cross was delivered following this play which they converted to score the opening goal. Japan struck back just three minutes later, when Fujitani broke through the left flank before sending a cross towards the centre. Ogawa made a move in response to this cross and induced the goalkeeper to come out of the area, which allowed the cross to go directly into the goal.

With the match entering an equally matched battle, it was the Uzbekistan side who once again took the lead. In the 29th minute, Japan was forced another turnover in the midfield, allowing Uzbekistan to initiate a fast break. Although they managed to evade the first wave, the Japanese defence conceded from the second wave launched by the Uzbek offence. However, despite conceding the go-ahead goal, Japan remained composed as they created opportunities to enter the opposing territory. In the 45th minute, Fujitani earned a foul in the opposing penalty area to earn a penalty kick. Ogawa calmly converted the spot kick to level the match once again. Fujitani was forced to leave the match after this play, as NAGANUMA Yoichi was brought onto the pitch. 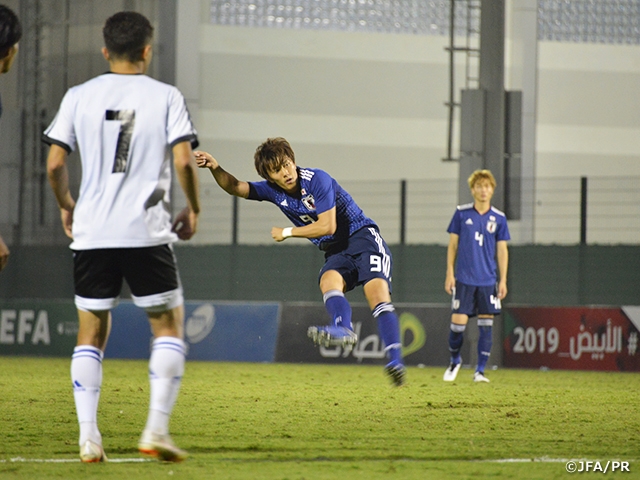 In the second half, Japan showcased their quick ball movements to create opportunities, but couldn’t seem to convert their chances. In efforts to take the lead, Japan brought on IWASAKI Yuto and UEDA Ayase in the 61st and 81st minute respectively. A golden opportunity came in the 88th minute, when Miyoshi captured the net from a loose ball created by Iwasaki’s shot, but the play was called offsides. Despite Japan’s efforts, the match ended with a final score of 2-2, giving each side a point apiece.

Following the match, Nakayama shared his take of the result, “We all knew this first match was going to be an important match. Although we really wanted the full three points, we should be happy with the one point we earned today.”

YOKOUCHI Akinobu, Acting Coach
Uzbekistan was a very good team. Following our first two matches, this was our first opportunity to face a team in the same age category, and we are glad to be facing such strong team. We couldn’t win the ball in those fifty-fifty situations and allowed our opponents to counter us too freely in the first half. However, we knew that if we can make adjustments in those aspects, we can stay competitive, and we managed to make those adjustments in the second half. It was the first time Koki (Ogawa) and Tatsuya (Ito) played together, so they have long ways to go, but when the ball was played to them, we seemed to have created opportunities, so that’s something we need to build on in the future matches.

DF #3 NAKAYAMA Yuta (Kashiwa Reysol)
Facing a team who attacks aggressively like today, we need to improve on the ways we enter the match, both as a team and as an individual. I personally felt the need to do better in defence. I managed to play some vertical passes later in the game, but it would be better if I can deliver more of those passes from the first half. We all knew this first match was going to be an important match. Although we really wanted the full three points, we should be happy with the one point we earned today.

MF #8 ITO Tatsuya (Hamburger SV/Germany)
I was selected into the U-21 team for the first time in our previous tour to Paraguay. During that tour, I also played as an offensive midfielder in a three-back system, so I remembered how I played back then and improve on my previous performance. My strengths lie on my ability to carry the ball upfront when receiving the ball in that position, so I hope to get more involved in our goals in the coming matches.

FW #9 OGAWA Koki (Jubilo Iwata)
Uzbekistan is capable of keeping possession of the ball, and we knew entering the match, that it will be a difficult match. We conceded two goals from turnovers, and that’s something we must improve on, but we still managed to fight through with great persistency. It was my first goal as a member of the U-21 Japan National Team, but I shouldn’t be satisfied with just one goal, so I will keep on working hard in the remaining two matches.

*Local Time
*The schedule is subject to change due to the team condition, the weather, etc.
*Some of the players will join the training session late on Sun. 11