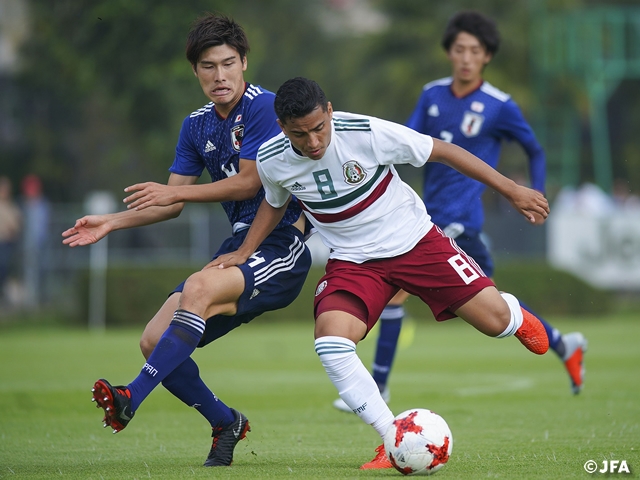 It was the host team, Mexico who took the initiative. The team showcased accurate passes with great pace and strong physical approaches while maintaining an aggressive pressure. Japan did well to deflect the Mexican attacks at first but conceded a goal in the 14th minute from a set-play.

However, this goal may have given Japan the wake-up call, as the team started to pick up their pace. Midfielder ITO Hiroki initiated attacks from the flanks with his passes, while defenders HASHIOKA Daiki and SEKO Ayumu led the defence to shed off the long balls delivered from the Mexican side to give Japan a chance to counter attack. Their efforts prevailed on the 31st minute when KUBO Takefusa and KAWAI Ayumu showed a collective effort to force a turnover before sending the ball to Ito at the middle, who delivered a superb through ball to allow TAGAWA Kyosuke to break through. Tagawa was brought down in the penalty area to earn a penalty kick and converted the spot kick himself to level the match.

With momentum on their side, Japan continued to create many opportunities. In the 34th minute, Kubo broke through the left flank to deliver a cross to Kawai who struck a shot, but his effort was blocked by the opposing defender. Another cross was delivered in the 39th minute, this time forward SAITO Koki connected with it, but his attempt went over the cross bar. Despite giving up a close opportunity to their opponents in the 43rd minute, Japan managed to head into halftime with a score of 1-1. 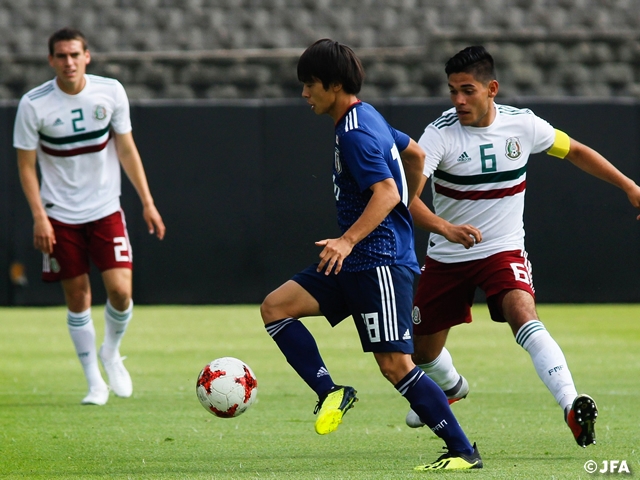 Both teams came out with a completely different look, as they made many changes during halftime. Similar to the first half, it was Mexico who took control of the match in the early minutes. Japan showed many easy mistakes and unnecessary fouls to give many opportunities out to the Mexican side. In the 65th minute, a powerful shot was taken by Mexico from a freekick, which deflected off a Japanese defender, forcing the goalkeeper WAKAHARA Tomoya to make an excellent save to keep the score intact. Japan created their own opportunities through OGIWARA Takuya’s overlaps in the left flank but couldn’t create a critical chance. Defender ABE Kaito displayed a tenacious effort to save a potential goal threating situation in the 70th minute. In the closing minutes of the match, HIRAKAWA Rei created numbers of opportunities with his passes, but couldn’t quite connect with HARA Taichi to capture the lead. Both teams came short from scoring a goal in the second half, as the match ended with a final score of 1-1.

Despite their hard-fought efforts in the high altitudes, the match left many tasks to work on for the Japanese side. 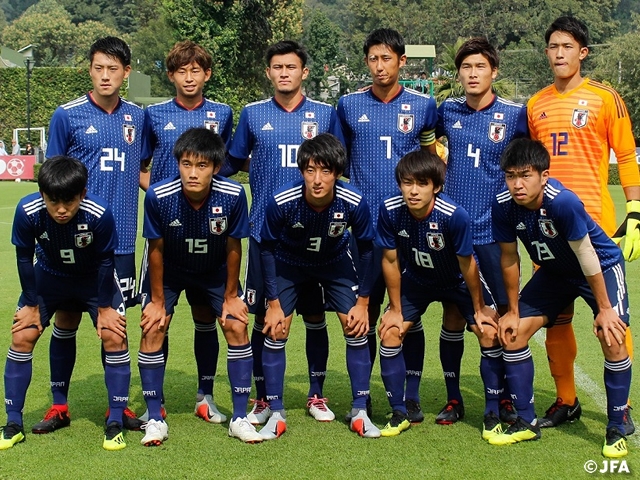 GK WAKAHARA Tomoya (Kyoto Sanga F.C.)
Following my participation with the U-19 National Team at the FIFA World Cup Russia, where we attended the site as training partners, I am glad to be named in the team again. This tour gives me the opportunity to visit a country I otherwise would not visit, and play against the world’s powerhouses, so I was looking forward for this tour. We are in high altitudes, so it is very hard to maintain our conditions, but everyone stayed aggressive in our match to create a positive atmosphere. However, we entered today’s match pretty poorly, as we made too many mistakes. We must keep a higher concentration to enter the match. The team showed great transitions but conceded opportunities to our opponents from our own mistakes, so that’s something we must improve on. Maybe perhaps the altitude has an effect on the ball, but the shots tend to carry further, so I had to keep that in mind when facing free kicks. During this tour, I would like to test myself to see how much I can cope with the world’s powerhouses like Mexico and Brazil. I will do my best to play up to my full potential.

DF OGIWARA Takuya (Urawa Reds)
I am very happy and proud to be selected into this U-19 travel squad to Mexico. I believe this will be the last tour ahead of the AFC U-19 Championship Indonesia 2018, scheduled this October, so I will keep an even higher motivation during this tour. In our match against Mexico, I was positioned in a different spot than I usually play at my club, so I kept on thinking of my tasks and roles while I played on the pitch. It was difficult to play against opponents with strong physiques, but we managed to stay aggressive in both offence and defence today. During this tour, I hope to build on my endurance to work hard throughout the match. I will keep that in mind for our next two matches.

DF SEKO Ayumu (Cerezo Osaka U-18)
It has been a while since I was last called up to the national team, so I am very happy. Last year when I was called up to the U-17 Japan National Team, I injured myself badly and spoiled my opportunity to play at the FIFA U-17 World Cup India 2017. It was a really disappointing moment for me, so I was really looking forward to being back with the national team and make the most out of this opportunity. I know many of my teammates here and even those I’ve never played with, we have been communicating well to understand each other’s strengths to deepen our combinations. I have gained many experiences playing with the national team in the past but playing in a high altitude in Mexico is something very unique and takes time to adjust. It felt like it was difficult to breath in our match today. Although I only played in the first half, I managed to play well with the other defenders to contain our opponents. However, it was regretful that we gave up a goal from a set-play. We need to analyse what went wrong and make the necessary adjustments in the future. This is my first time with the U-19 Japan National Team, so I hope to play well to be selected into the squad for the AFC U-19 Championship Indonesia 2018.

MF ITO Hiroki (Jubilo Iwata)
I am glad to be selected into the travel squad for this Mexico tour. I will give my best to make it into the member for this October’s AFC U-19 Championship Indonesia 2018, while striving to improve the team to earn our spot into the FIFA U-20 World Cup Poland 2018. There is no doubt that the qualification round in Indonesia will be a tough competition. A small mistake can cost the entire match at this level, so we must keep working hard to nurture the right mindset to play through these world stage matches. In our match today, our patience was being tested during the early minutes of the first half, but we gradually managed to showcase our style of football as the match progressed. Although we tied this match, we will give our best to win the next two matches and gain confidence ahead of the AFC U-19 Championship Indonesia 2018.

MF TAKI Yuta (Shimizu S-Pulse)
This was my second call-up to the U-19 Japan National Team since attending the FIFA World Cup Russia as a training partner, and I am very grateful to be selected to the team again. The environment surrounding us here is very different from Japan, including the high altitude, and we have to stay keener to maintain our conditions. It also reminded us that the Mexico team has been training under such environment the entire time. That’s something we must keep in mind when training to fill in the gap between the world’s powerhouses. In our match against the U-19 Mexico National Team, we weren’t allowed to possess the ball freely and we struggled to shorten our distance between each other. The powerful approach made by our opponents gave us a taste of what the world standards are like. As a team, we will look back on our performance today and make the necessary adjustments ahead of our next two matches. We hope to play more aggressively in our next matches, both as a team and as an individual.

*Local Time
*The schedule is subject to change due to the team condition, the weather, etc.
*The official name of the National Training Centre of Mexican Football Federation is as follow:
Centro de Alto Rendimiento de la Federacion Mexicana de Futbol
*Please be advised that depending on the circumstance of the venue, an admission restriction may apply.