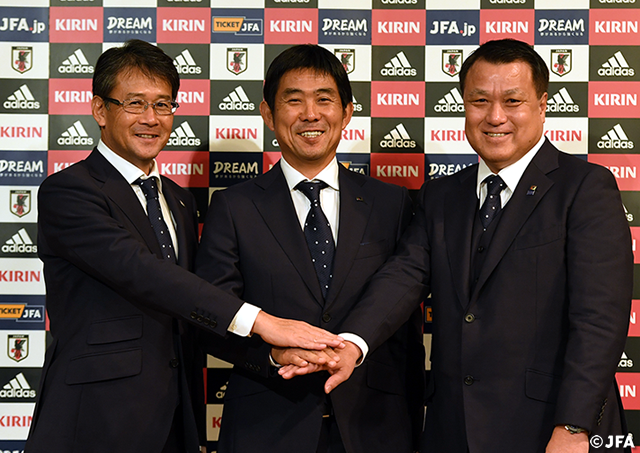 The SAMURAI BLUE (Japan National Team) would like to announce the appointment of the new coach, MORIYASU Hajime.

It is not an easy task to manage two national teams. I believe it’s an impossible task for a single person, but with the support of the Japanese football community and all the people who has been supporting the Japan National Team, that impossible task becomes possible, and ultimately leads to a major accomplishment.

As the head coach of the Japan National Team, there are many things that must be taken care of, and I would like to address a few of those things to everyone. First of all, we must strive for the Japan National Team’s victory. We must keep in mind of the generation change. We also must create a fusion between different age categories. And we must not just focus on the national team but strive for the overall growth of the Japanese football community. The baton has been handed over to me from countless predecessors. I must now fulfil my obligation and pass on this baton to the next Japan National Team and the Japanese football community in the best way possible. To do so, I will give everything I’ve got in this present time.

In order to manage two national teams, I must have an enormous amount of commitment. And I must keep in mind that the Japan National Team can only conduct their activities with the support of many people. I will pursue my obligations with the “Commitment” and “Gratitude” engraved to my heart.

I will give my best to meet the expectations of the fans, supporters, citizens of Japan, and everybody who has been supporting the Japan National Team.

From my youth days up until today, where I am named as the coach of the Japan National Team, I have been coached and educated by many coaches and staffs. When I graduated from high school and arrived in Hiroshima to become a football player, Japan still only had amateur leagues. From there, J. League was established, and we were given the dreams of becoming professional football players. I was blessed with the opportunity to play for the Japan National Team and given the experience to coach teams in the J. League. All those experiences have led me here today, and I am very grateful for it.

After I retired as a player, I have worked as a Development Coach for Sanfrecce Hiroshima and worked for the Japan Football Association (JFA) as a National Training Centre Coach. Those opportunities have given me a priceless experience, as I was given the opportunity to travel around the country to observe grass-roots movements as well as the activities conducted by many different age categories. There are very few people who makes a living as a coach. Most of them have different jobs and a family to support. Many coaches watch over their own team while taking part of the activities conducted by the Training Centre. So many of these people are sacrificing their own lives to develop the youth players. I have seen that in first hand through the assignments I was given from the club and the JFA.

I must not take for granted of those people’s efforts. Because of them, the players have developed to play for the national team and the Olympics. Without the tireless efforts of the coaches and the staffs who provides the environment, we would not be seeing these wonderful players. We must keep in mind that we are representing the nation and that we are fighting in behalf of those people who has sent us to the pitch.

Just recently I was given the honour to participate at the World Cup in Russia as an assistant coach and gained lots of experience. Coach NISHINO was a wonderful coach. His ability as a coach was undoubtedly great, but his ability to bring out the positives and strengths of the Japanese players was on full display. He has really taken in consideration of the history behind Japanese football and brought the best out of the team. Mr. HALILHODZIC has shown us what the Japanese players lack, such as individual strengths in one-on-one situations and the intention to move the ball quickly towards the goal. Coach Nishino has taken in those aspects as an additional layer on top of the strong points that the Japanese players already had. He kept a wide perspective and has constantly thought of the best way to integrate those additional points to the Japanese style. I have received the baton from Coach Nishino, and now I must find ways for the Japanese players to showcase their strengths while facing the world.

I must construct a team that can fight through the battles in Asia, and eventually head into the competitions against the world. I will build on what Coach Nishino has worked on and develop an even stronger All-Japan team. With the help of the players and staffs, I will like to create the best team possible.

At any given time, I will give my best. I would like to express my gratitude in advance for all the support and hope everyone will fight with us.