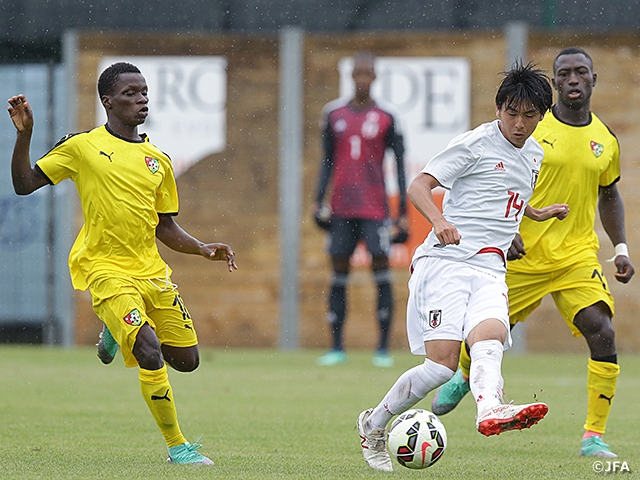 Thursday 7 June, the U-21 Japan National Team faced U-21 Togo National Team in the 7th/8th place playoff match of the 46th Toulon International Tournament. MIYOSHI Koji gave Japan the opening goal in the 39th minute, while the Japanese defence displayed a solid performance to keep a clean sheet despite the stint of dominance shown by the Togolese side. With the win Japan finished the tournament in seventh place.

Japan rotated six of their starting players from the third match of the group stage, electing to start OBI Powell Obinna at goal, SHIIHASHI Keiya, TOMIYASU Takehiro, and SUGIOKA Daiki in the defence line. Four players in midfield with MATSUMOTO Taishi, INOUE Shion, ENDO Keita, and SUGA Daiki, while TAGAWA Kyosuke was named as the lone striker with Miyoshi and MITOMA Kaoru placed beneath him.

In the match played under heavy rain, the Japanese defence line led by Tomiyasu showed great buildups to carry the ball upfront. However, the Japanese side struggled to create a goal scoring opportunity as Matsumoto later described his opponents, “there were many players with physical advantage.”

The deadlock was broken in the 39th minute, when Matsumoto caught the opposing players off guard and delivered a pass to Mitoma upfront. Mitoma then dished the ball into the space behind the defenders where Miyoshi was making a timely run. Understanding the positioning of the goalkeeper, Miyoshi made a brilliant first touch before slotting the ball into the goal where he later mentioned that the goal was “just as I intended.” 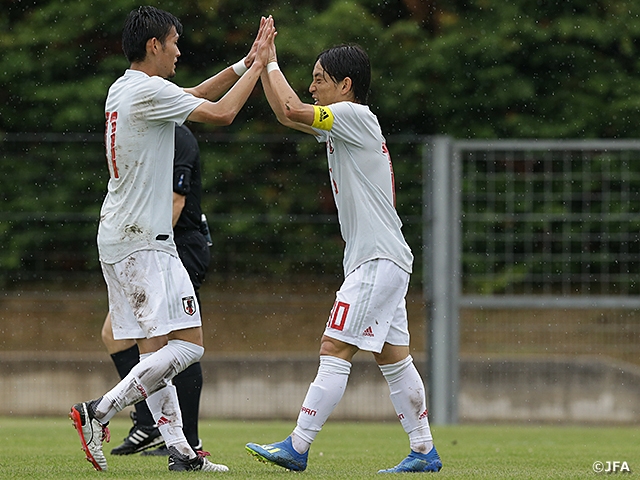 Togo came back in the second half as they increased their pressure in both offence and defence, gradually taking control of the match. Matsumoto described the shots taken by the Togolese side as “powerful shots we don’t normally see in Japan,” as their shots struck the crossbar and goalpost numerous times. The Japanese defence showed their tenaciousness to block the shots using their body and responding to the loose ball quickly, refusing to give up the equaliser.

Conversely Japan created opportunities from counter attacks while keeping the clean sheet. The match ended with Japan holding on to the one goal lead, allowing them to finish the tournament on a high note, despite their struggles in the early goings.

Japan’s acting coach, YOKOUCHI Akinobu praised his players and summed up the tournament where the team finished seventh out of 12 teams, “the players did very well. It must have been difficult for them to bounce back after failing to make it into the semi-finals, which was their goal for this tournament. But the players showed great attitude during training session and great heart in today’s match, so I really appreciate that.” 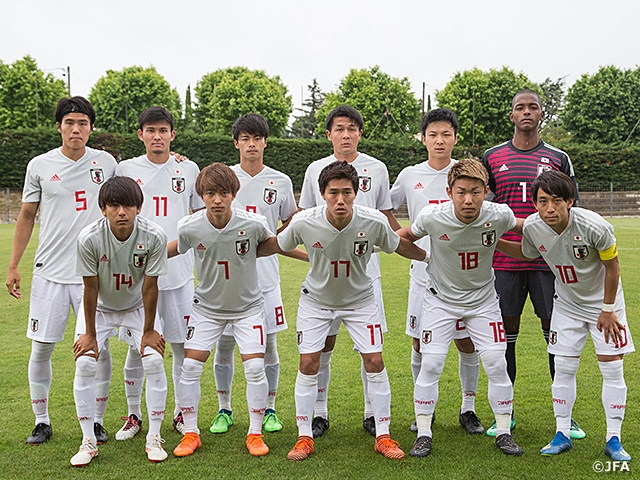 YOKOUCHI Akinobu, Acting Coach (U-21 Japan National Team)
Despite the disadvantage in their physiques, I told my players to put up a good fight. Even if we can’t win the fifty-fifty battle, we still have to disrupt the opponent and fight for the loose ball. In that sense, we did a good job in this match. Most importantly, it was crucial that we managed to keep a clean sheet. However, there were many things we still have to improve and the tournament as a whole left us with many tasks to work on.

DF ＃5 TOMIYASU Takehiro (Sint-Truidense V.V. / Belgium)
Before the match I talked with Obi, Shiihashi, and Sugioka that we want to keep a clean sheet in this match. It was good that we managed to do so, especially because we have conceded goals in our last three matches. There were times we were dominated in the second half, but we kept playing physical defence to keep our lead. However, we looked out of gas at points and got lazy where we had to apply pressure, so we must improve ourselves once we return to our clubs.

MF #10 MIYOSHI Koji (Hokkaido Consadole Sapporo)
I knew Mitoma is always aware of where I am, so it went well. Entering the match, we were informed that there is a gap between the centre half and the fullbacks, and during the match I was able to see that gap in first hand. The ball delivered by Mitoma was perfect and my first touch went just as I intended, so all there was left for me to do was to score a goal. Before that goal, we kept playing the pass to the players feet, and both the delivering end and the receiving end were not anticipating to utilise the space behind the defenders. We need to make more movements to force the opponents out of their position, especially when we face stronger opponents.

MF ＃14 MATSUMOTO Taishi (Sanfrecce Hiroshima)
The victory was a result of our team effort. Although I was able to initiate our attacks, I still need to make a clear distinction between plays I drop back and push forward in our buildups. This tournament allowed us to experience many things we can’t experience in Japan, and I hope to implement what I learned here into my plays in Japan.