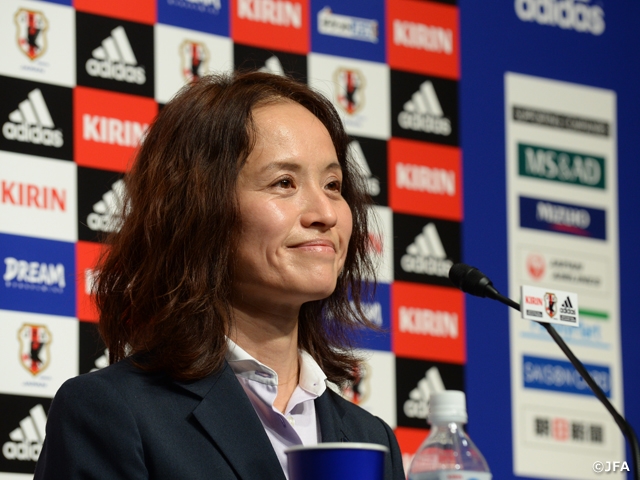 On Friday 20 May, TAKAKURA Asako, the coach of Nadeshiko Japan (Japan Women's National Team), announced the squad for the coming two consecutive international friendlies against the USA Women's National Team next month. Ten players were replaced from the Asian Qualifiers Final Round for the Rio de Janeiro Olympics this spring, and five new faces were added to the team.

The goalkeeper IKEDA Sakiko (Urawa Red Diamonds Ladies), the defender SASAKI Mayu (VEGALTA SENDAI LADIES), and midfielders TAKAGI Hikari (NOJIMA STELLA KANAGAWA SAGAMIHARA), NAKASATO Yu (NIPPON TV BELEZA), and CHIBA Sonoko (AS HARIMA ALBION) were selected for the first time. These four, apart from Ikeda, joined the team after the La Manga International Women's U-23 Tournament in March. The forward YOKOYAMA Kumi (AC NAGANO PARCEIRO LADIES), who displayed her ability in the final qualifying round for the Olympics at the end of February, joined the team as well.

The nine players, including the forward OGIMI (NAGASATO) Yuki (1. FFC Frankfurt/Germany), the midfielder SAKAGUCHI Mizuho (NIPPON TV BELEZA), and the defender KUMAGAI Saki (Olympique Lyonnais), who played in the 2015 FIFA Women's World Cup in Canada and finished in second place, remained in the squad. The midfielder MIYAMA Aya, however, removed herself from selection due to her current lack of form.

Takakura Asako, who has recently taken up a post as the coach of Nadeshiko Japan, explained that she chose the experienced players, who are still improving, and the young ones, who showed promise in their performances. She mentioned the criteria for selection to the national team – the players with ‘technique, intelligence, stamina, contribution, and enthusiasm for the national team.’

She also said that she wanted each player to become a core player to lead the team, while avoiding relying on one particular player. The coach expects the players to get themselves ready.

The USA currently ranks first in the FIFA World Ranking, and is preparing for the Rio de Janeiro Olympics. Japan lost to the USA 5-2 in the final of the 2015 FIFA Women's World Cup in Canada. The record against the USA is 1 win, 24 losses and 6 draws.

The players get together on Monday 30 May to leave for the USA to hold two days of training in preparation for Japan’s first game on Thursday 2 June.

The coach Takakura noted: ‘I’m thrilled to play against the USA for Nadeshiko Japan’s new start. Despite the altitude of the State of Colorado, for which we haven’t got enough time to prepare, and the time difference, we’d like to play fearlessly. Unexpected things always happen in football.’ 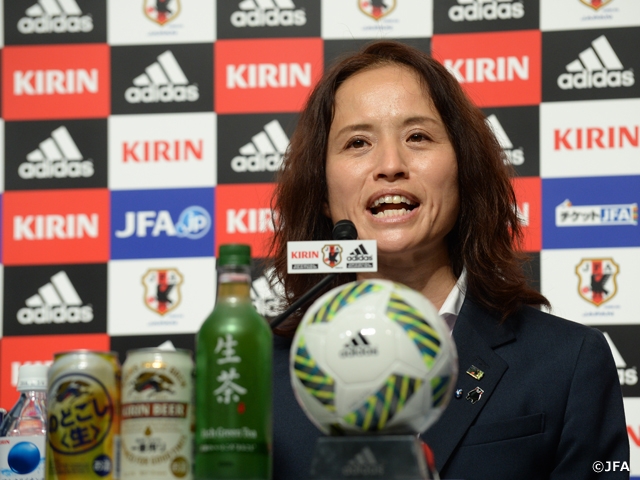 TAKAKURA Asako, coach of Nadeshiko Japan (Japan Women's National Team)
Nadeshiko Japan is improving itself for the future. I selected regular players, who recently showed improvement, and new faces with potential, who were in good condition, and had shown some promising performances. I’d like to choose the captain after talking to the players on site. Sakaguchi has 100 caps, and maintains the highest level of performance. I gave her No.10, expecting her to be aware of leading the team.

The USA is prepared fully prior to the Olympics, whereas Japan just assembled a new team without much of a preparation period. We’ll play a game in tough conditions – not adjusting enough to Colorado’s altitude and the time difference. Having said that, unexpected things always happen in football. So we’d like to play as hard as possible without fear, as it’ll be a great opportunity for the staff and the players to display our abilities.

Despite the result in the World Cup final last year, we didn’t concede goals against the USA, apart from through free kicks and corner kicks. We’ll stay patient, parrying the opponent easily, in order to find our momentum. I expect that we’ll create goal-scoring opportunities in a good way, and use each player’s strengths.