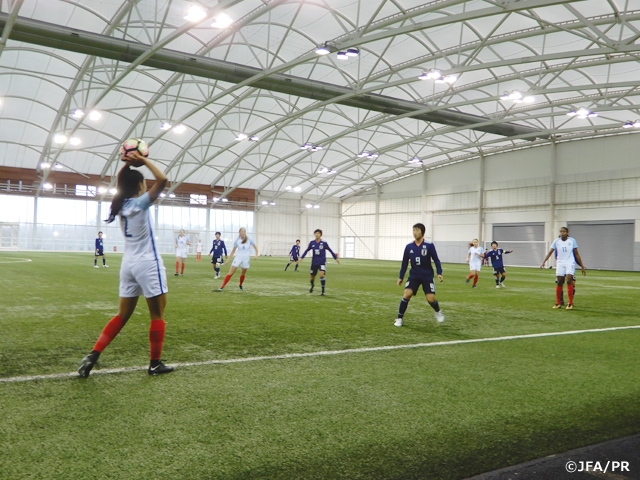 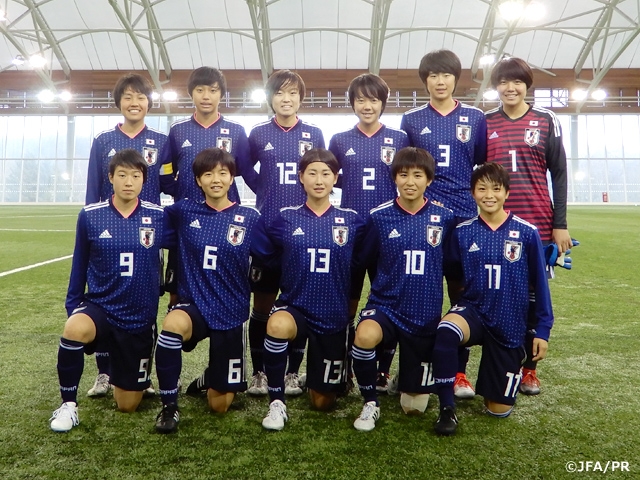 It was a tentative start for the Japanese squad, as they observed how the opponents would enter the match. The first chance came in the 16th minute, when MIZUNO Fukina, after receiving a pass from NAKAE Moe, delivered a left cross to ONISHI Wakana, but her effort was parried away by the opposing goalkeeper.

Thereafter, the game stayed in the balance for some time as both teams tried to figure out the game plan implemented by their opponents, but the young Japanese internationals came through and broke the deadlock on 27 minutes. SHIROWA Reina reacted to a through ball from ARAI Miyu and fired home with composure to give her side a 1-0 lead. Japan orchestrated another scoring opportunity in the 32nd minute, when Mizuko was put clean through by Nakae, but her attempt was secured firmly by the English goalkeeper.

Two minutes later, U-17 England struck back and levelled the match in the 34th minute. After intercepting the ball on the Japanese end of the pitch, they took the ball up and netted an equaliser to tie the game 1-1. In the remainder of the first half, Japan attacked and tried to reclaim the lead, but were unable to find the English net.

Entering the second half at one apiece, England took their first lead of the match in the 50th minute. The English squad exploited the space behind the Japanese defence on the right side and struck home a go-ahead goal to give them a 2-1 advantage.

After 54 minutes, Japan nearly came on level terms with a brilliant individual effort from Mizuno. The young Japanese midfielder collected a ball on the right flank and surged up the pitch before she fired a shot, but her attempt hit the goalpost. Three minutes later, YAMAMOTO Yuzuki with the ball in the centre fed a pass to Mizuno on the left flank. Mizuno then cut in the middle before she squared it to SHIMADA Mei, but her shot was unable to find the back of the English net.

Japan continued to attack and orchestrated several goal-scoring chances, but could not take advantage of them and lost their first training match 2-1 to England.

The Japanese squad will play their second match against U-17 England Women's National Team on Thursday 21 December starting at 2 p.m local time. 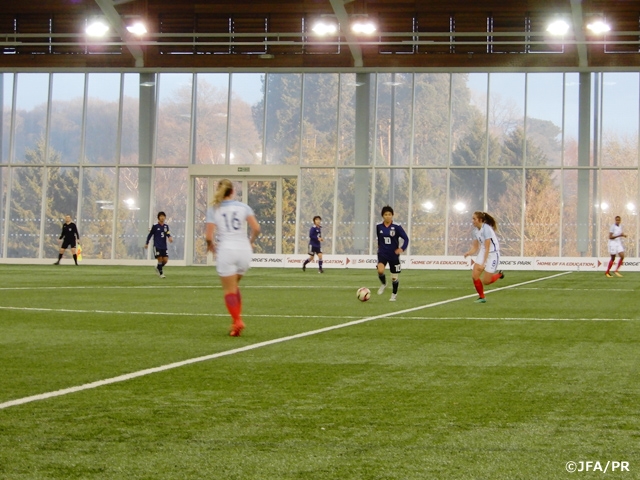 KUSUNOSE Naoki, Coach (U-16 Japan Women’s National Team)
From the beginning of the match, we were trying to put strong pressure on the opponents, and steal the ball and move the ball around with good tempo once we reclaimed possession. However, the English side attacked with pace and wasted no time to take the ball forward and exploit the space behind our backline. As a result, we lost to them 2-1. Not to waste this valuable tour in England, we will make the necessary changes tomorrow and prepare ourselves to win the match on the following day.

GK #1 OHBA Shu (JFA Academy Fukushima)
Communicating better with defenders is one of the areas that I need to fix from today’s game. We conceded goals from not making clear decisions. Thus, I will try to read the given situation by making better observations of the surrounding plays and decide on my actions. We have a chance to play again against England on Thursday 21 and will try to communicate better in the coming match. Personally, I will fix the problems that I had in today’s game. We are really looking to win the next match with a clean sheet as well.

MF #11 NAKAE Moe (Albirex Niigata Ladies U-18)
In attacks, not many players were involved in the plays in front of the goal. Thus, we need to work on the off-the-ball movements of the surrounding players and minimise the number of touches to break through the opposing defence. Furthermore, when I get the ball, I want to orchestrate better attacks by not making any errors in controlling the ball or sending direct passes to my teammates. In defence, we did well as we all worked together as a team to reclaim possession. However, we showed weakness in the battles for the ball and next time we will try to win them as well. In the next match on Thursday 21, we will be more vocal and perform better, and go all out to win it as well.

MF #13 ONISHI Wakana (Urawa Red Diamonds Ladies Youth)
It was an important first match to test ourselves, while we kept in mind the things that we worked on during yesterday’s practice. I personally tried to display my strength while coordinating my efforts with my teammates, but found many areas that I need to improve on as well. In attacks, I was aggressively seeking to score from short range after I got past the opposing defenders, but felt that I need to be quicker in taking the shots to score more goals. By coordinating better with my teammates, if we can improve on the off-the-ball movements of the surrounding players to break through the opposing defence, then I believe we can enjoy playing the match more. In defending, I need to make quicker predictions to put quicker pressure from the frontline, and corner the opponents and rob the ball more effectively. Taking advantage of the match today, we will try to win the coming game on Thursday 21 by fixing the problem areas while we keep a high level of focus during our practice. I hope everything will lead us to strengthen the team for the FIFA U-17 Women's World Cup Uruguay 2018 next year.

FW #3 SHIROWA Reina (JFA Academy Fukushima)
In today’s match, I felt the overwhelming speed and power that our opponents had. We kept possession for a good amount of time, but couldn’t take advantage of our scoring chances. We are looking to make amends in the coming match on Thursday 21 by capitalising on them and scoring goals. I also felt that the off-the-ball movements of the surrounding players especially in front of the goal is important in breaking through the opposing defence and increasing the number of times that we can take a shot at goal. One of the problems we had in defence was that we ran out of stamina and made many passing errors. We will try to cut down on such errors by creating better passing options for our teammates. In the next match, I am looking to get more involved in the attacking plays and score goals in order to win the match against England before returning home.