U-24 Japan National Team announces roster for the Tokyo Olympics

On Friday 18 June, JFA held an online press-conference to announce the final roster for the Games of the XXXII Olympiad (Tokyo 2020) men's football tournament, which consists of 18 players and four alternate players. The team will play in the KIRIN CHALLENGE CUP 2021 on Monday 12 and Saturday 17 July with the same roster.

Before making the announcement, coach MORIYASU Hajime started by mentioning, “I would like to express my gratitude towards all the players who were involved in this team.” And continued to say, “We had to exclude some of the players that had what it takes to be on the team. We had to make extremely tough decisions in this selection process.”

Unlike other international competitions like the FIFA World Cup and AFC Asian Cup where teams are allowed to carry up to 23 players, only 18 players are allowed at the Olympics. With that limitation in mind, coach Moriyasu mentioned that the selection process took until the morning of the announcement date, but made the final decision based on the following criteria.

“We prioritised players who can create opportunities single-handedly, play solid defence at the individual level, and make runs for the team. In addition, with the Tokyo Olympics being played under tight schedule and hot weather, we valued the players’ versatility.”

Players will be asked to play multiple matches with two-day rests under the scorching summer weather of Japan. That is why the coach has made it clear that “we cannot play through the competition with the same 11 players.” Having the flexibility to rotate the line-up will be a key element for the team’s success at the Olympics.

That is why many players who are capable of playing multiple positions were named into the squad, such as ITAKURA Kou (FC Groningen) who can play both defensive midfield and centre-half, NAKAYAMA Yuta (PEC Zwolle) who can play both full-back positions as well as the defensive midfield role, HASHIOKA Daiki (Sint-Truidense V.V.) who can be deployed as centre-half, full-back, and wing-back, HATATE Reo (Kawasaki Frontale) who can be played as a left full-back all the way up to a forward, and SOMA Yuki (Nagoya Grampus) who can be utilised in both flanks as a full-back or a side-half.

The three over-age (OA) players, YOSHIDA Maya (U.C. Sampdoria), SAKAI Hiroki (Urawa Red Diamonds), and ENDO Wataru (VfB Stuttgart), are hoped to be the backbone of this team, while TOMIYASU Takehiro (Bologna FC 1909), DOAN Ritsu (PSV Eindhoven), and KUBO Takefusa (Real Madrid), who have been receiving regular call-ups from the SAMURAI BLUE, were also named into the squad.

Coach Moriyasu sent out a message to the players he selected, “I want them to play on behalf of the players who didn’t make it to the roster and show their utmost effort for the country.” The coach also stressed the fact that “Our activities are made possible with the support of so many people.”

“I would like to thank everyone who was involved in the players’ development, the parents, coaches, and all the people who has paved the way for us to conduct our activities leading up to the Olympics. We are supported by so many people, and we thank each and everyone of you.”

Coach Moriyasu concluded the conference by stating his aspiration towards the Olympics, “We must understand what it means to play in the Olympics and to represent our country. We will give our utmost efforts to prepare ourselves within the remaining time we have.”

The U-24 Japan National Team will start its training camp on 5 July, play two international friendly matches at the KIRIN CHALLENGE CUP 2021 (against U-24 Honduras on 12th and U-24 Spain on 17th), before playing their first group stage match of the Olympics against South Africa on the 22nd.

MORIYASU Hajime, Coach of U-24 Japan National Team
I am aware that there are speculations and debates on whether or not the Tokyo Olympics should be held under this ongoing pandemic. However, I feel that it is our obligation to deliver joy, energy, and courage to those who are supporting us, and the only way we can do that is through our performance on the pitch. We hope to showcase a performance that can send encouragement to those who are struggling through the pandemic. In terms of the squad selection, I feel that I have selected the best players at the moment. I will reassess the players’ conditions once we enter the training camp and prepare ourselves ahead of our first group stage match. There are players playing for clubs in Europe, in the J.League, and those who are currently playing in the AFC Champions League. That is why I must monitor the players’ conditions and try to pace ourselves so that we can enter the first match against South Africa in our best condition. 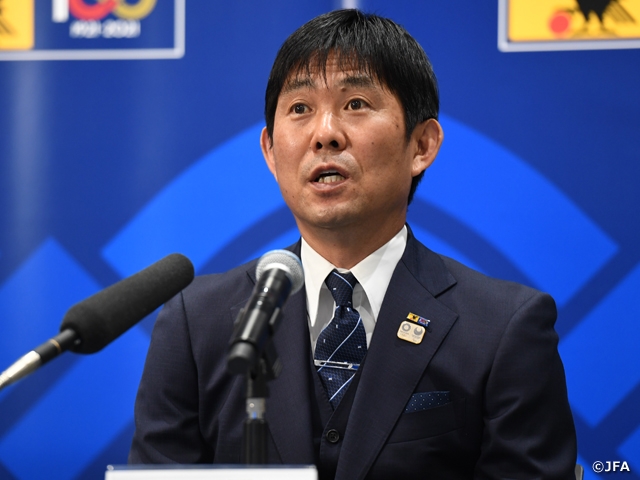 SORIMACHI Yasuharu, JFA Technical Director
I feel that this U-24 Japan National Team has come long ways to reach this press conference. We managed to make it this far because of the support of each club, so I would like to take this time to thank all the clubs involved. Thank you very much. We have been working as “One team, two categories” since last year, so I am confident that each one of these players can contribute for our country. However, over the past two years, we were not able to give our players enough international experience as we wished for, due to the corona-pandemic, so I hope this Olympics will provide them with the experience they needed. Our ultimate goal is to win at the World Cup, so we need these players to be ready to contribute for the team at the final qualification round in September. It is great that we are seeing more young players having the ambition and making the challenge to play overseas. The Olympics is a unique competition, and it is held during the off season of the European leagues. That is why it is so hard to get permission from foreign clubs. However, through the tireless and persistent efforts made by the JFA staffs, we were able to assemble the players we needed to construct this team. I would like to thank all the staffs who were involved in the negotiations for their efforts. At the same time, the players must prove that they were worth the trouble. We strongly believe that this team can win the gold medal, so we hope the players believe in themselves, too. At this Olympics, we are hoping to achieve two goals. One is to win the gold medal, and the other is to further develop our players. 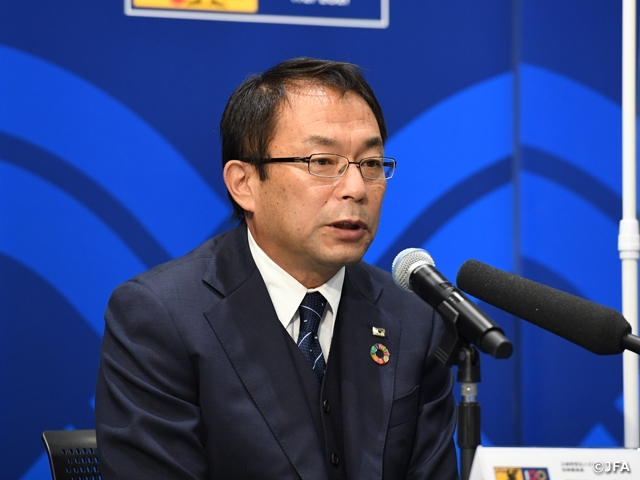