The match started with the players and staffs giving a round of applause to show their respect and gratitude towards the medical workers and essential workers who are working on the frontline to combat COVID-19. In addition, JFA has launched a crowdfunding event, starting on 3 June, to support the medical activities held in Hokkaido. 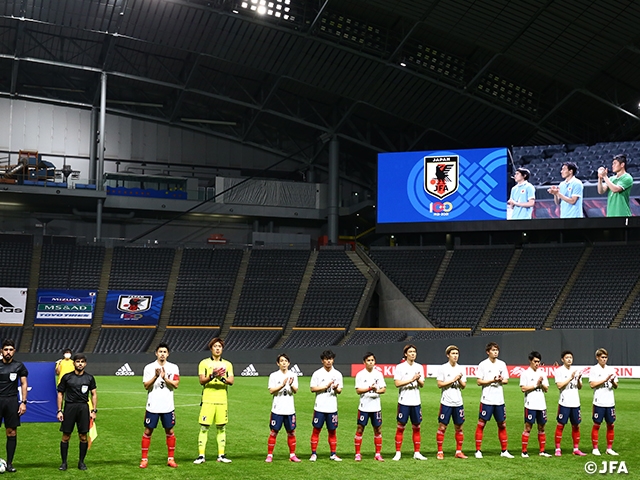 While the starting line-up of the SAMURAI BLUE featured veteran players who have experienced the FIFA World Cup, such as OSAKO Yuya (Werder Bremen) and NAGATOMO Yuto (Olympique de Marseille), the U-24 Japan National Team elected to go with a starting eleven consisting of only the players under 24 years old.

Including this match against the SAMURAI BLUE, the U-24 Japan National Team is scheduled to play three matches in June, which represents the final opportunity for the players to make a case for themselves to secure a spot into the squad for the Tokyo Olympics. With their first match being against the senior team of the Japan National Team, Hashioka reflected on their approach for this match, “We were super motivated and managed to enter with great enthusiasm.”

However, despite the uplifting vibe, the U-24 Japan National Team conceded the opening goal to HASHIMOTO Kento (FC Rostov) from a CK in the second minute. With the team getting caught off-guard in the early minutes of the match, Itakura later mentioned, “We need to go over the match footage and address why we let him free.”

After conceding the opening goal, the U-24 Japan National Team gradually picked up their pace, as coach YOKOUCHI Akinobu later reflected, “It took us a while until we found our rhythm and the SAMURAI BLUE took full advantage of our slow start.” As they increased their intensity level, the U-24 side started to create opportunities to threaten the opposing goal in the first half. However, the team conceded back to back goals in the 41st and 52nd minute.

In efforts to change the dynamics of the match, coach Yokouchi made eight substitutions in the second half. ENDO Wataru (VfB Stuttgart), who is one of the three over-age (OA) players selected into the squad, was introduced in the 78th minute, as he reflected, “I was getting the impression that we were not using the defensive midfielders effectively.” The 28 year old midfielder who plays in the Bundesliga, added an additional layer to the offence and created multiple opportunities for the U-24 side, but fell short from cracking the solid defence showcased by the SAMURAI BLUE. 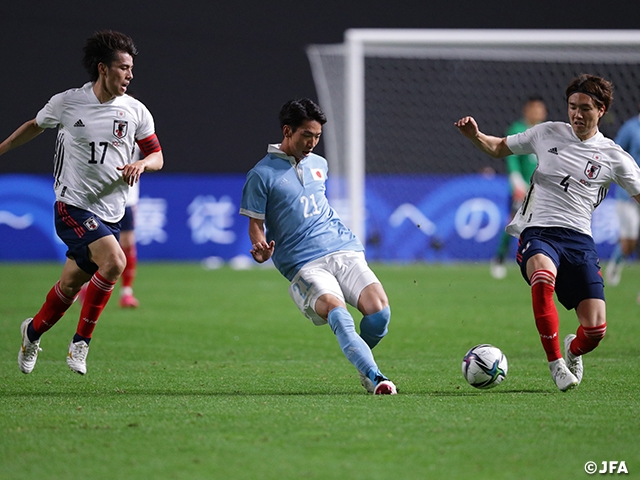 With the team kept scoreless in a 0-3 loss, Hashioka mentioned after the match, “We still need to improve in many aspects.” Endo, who showed his effectiveness in the late minutes, mentioned that this was a great learning experience for the U-24 squad, pointing out that, “The players of the SAMURAI BLUE played full out for this match, so it was a great match.”

The team will travel to Fukuoka to face the U-24 Ghana National Team on Saturday 5 June. The match was organised to simulate their first group stage match of the Olympics against South Africa, making this a crucial match to prepare for the summer tournament.

YOKOUCHI Akinobu, Coach of U-24 Japan National Team
The SAMURAI BLUE had the upper hand in terms of playing with a high intensity level and under pressure. We must accept this result and make the most of this 0-3 loss, so that we can become a better team.

HASHIOKA Daiki (Sint-Truidense V.V.)
I was amazed by how effective the players of the SAMURAI BLUE were in the final third. We have been inspiring each other at this training camp to reach a higher level, so we will continue to try to help each other and showcase a strong performance both as a team and as an individual.

ITAKURA Kou (FC Groningen)
To be honest, that opening goal was a very regretful goal, and we must accept the fact that we lost 0-3. We played a bit too passively in the early minutes and couldn’t keep a good distance with each other when we were passing the ball from the defence line.

ENDO Wataru (VfB Stuttgart)
This match against the SAMURAI BLUE has given the U-24 Japan National Team a great learning experience. There are many things we can take back from this match and we must make the most of this experience. The players are already going over the match as we speak right now. 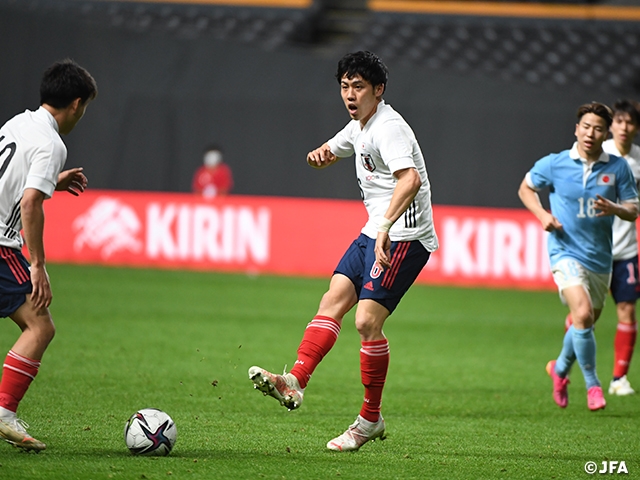