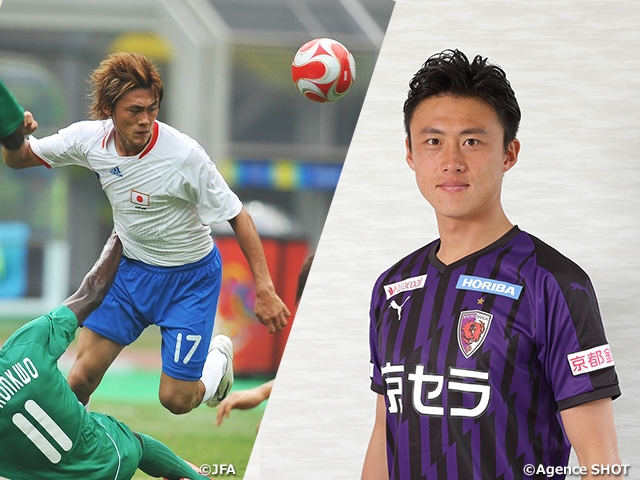 Hoping for great success at the Tokyo Olympics

After playing in the 2008 Beijing Olympics, LEE Tadanari made his way into the Japan National Team and earned a contract with a club overseas. While looking back on the memories, we asked Lee, what he felt and gained from the Olympics, and what message would he like to pass on to the current players who are striving to play for the upcoming Olympics.

――You have joined Kyoto Sanga F.C. from this season. What is your impression of Kyoto?

Lee Kyoto has many historical buildings and the whole city is like a museum. One of the greatest cities in the world where you can get chills just by walking through the city. Prior to joining the club, I thought that Kyoto Sanga F.C. has to become an iconic club that can bring excitement to the city. The club is currently trying to make their return to J1, and I feel fortunate to be a part of this team.

――Sanga Stadium by KYOCERA has just opened in February. What is the stadium like?

Lee It’s a very compact and wonderful stadium that can fit about 30,000 people. It reminded me of the stadium at Southampton (England), and the stadium can produce great unity with the crowd. People do not come to the stadium only to watch the game, but they come to experience the extraordinary atmosphere where the supporters unite as one. I have always said that “Sports can create explosive emotions,” because we are instantaneously moved by a single play. The experience of sharing those emotions with over 20,000 other people is the attraction of this stadium. As a player, there is an indescribable sensation when scoring a goal on the pitch, and I play football to score goals. I get happy when I score, but I get even happier when I see the supporters rejoicing over my goal. I put all the hard work just for that moment. 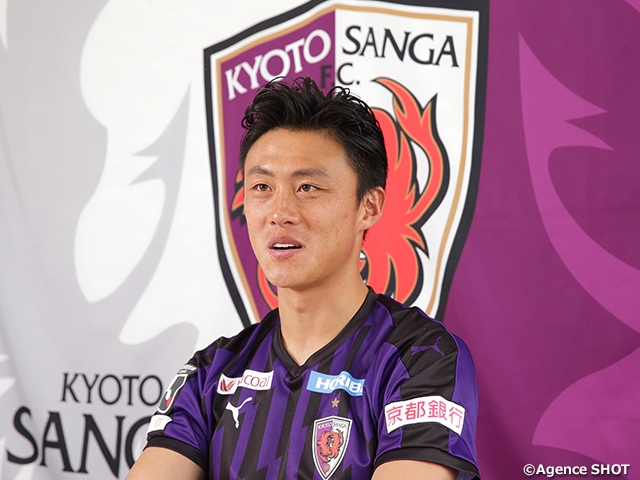 Everyday is a try-out session for the players

――You obtained Japanese citizenship in 2007 and you were selected into the U-22 Japan National Team ahead of the qualification round of the Beijing Olympics. What went through your mind when you first wore the Japanese jersey?

Lee Being born with a Korean nationality, I have idolised the Korea Republic National Team as a kid, but I was also inspired by the Japan National Team, as I grew up watching Kazu (MIURA Kazuyoshi) and RAMOS Ruy play for the national team. So, when I first made the team, I was happy, but more than anything, I felt so much pressure, and I remember telling myself, “I must come through with this, I must lead the Japan National Team.”

I also knew that making the team was just a beginning. With my last name being “Lee,” participating in the Olympics as a member of the Japan National Team became a huge motivation, so entered each day as if it was a try-out session. At the time, HIRAYAMA Sota and CULLEN Robert were the two big names on the national team, so I had to produce results. I played each match telling myself, I must score or assist goals in order to survive in this team.

――Tough competitions awaited the team at the second and final round of the Asian qualifiers.

Lee I strongly remember our match against Qatar at the final round, where we lost 1-2. Our opponent celebrated the victory as if they already qualified for the Olympics, and it made us strengthen our bond as a team. Through those tough competitions, we were able to grow as a team, and it also gave me a great learning experience as a player. Looking back, I feel fortunate to be given the opportunity to visit other countries and experience different cultures at a such young age.

――Many players from that team have later featured the senior team.

Lee Although we were going through some tough matches, the team atmosphere was surprisingly positive. Coach SORIMACHI Yasuharu kept us competitive within the team, and with many Japanese players signing with clubs overseas, each player was setting their standards high. We were all trying to earn offers from big clubs, and we shared our aspirations to play overseas during our training sessions. I remember telling each other that we were going to improve ourselves by playing overseas and help the national team win the World Cup.

――Japan was eliminated from the Beijing Olympics after losing three consecutive matches against USA, Nigeria, and Netherlands at the group stage.

Lee Our opponents were simply better than us and we also struggled to play as a team. Although our team featured many great talents, we failed to work together as a team, so that result was inevitable. The tournament made me realise that my plays were not effective at the world level. It also led me to the conclusion that players playing for top clubs of the world are at an even higher level. The tournament allowed us to realise the gap between ourselves and the world. Although we were in shock after losing the matches, it gave us the opportunity to reflect on ourselves and make forward progress as players. Looking how the players and the team progressed following the tournament, it makes me think that the Beijing Olympics was a great steppingstone for all of us.

――What do you think was the biggest difference between the world’s top teams and Japan?

Lee The experience of playing at the world stage. Our team primarily consisted players who played domestically, so many players struggled to play under the pressure. The fact that we couldn’t pick up our momentum in the first match turned out to be a big factor, but I feel like we made the tournament more than what it was and failed to enjoy the moment. This was something I came to realise after playing numbers of international matches later on.

――What was your next goal following the Olympics?

Lee I totally burned out after the Olympics. I wasn’t able to establish my next goal, and I aimlessly played matches at Kashiwa Reysol. I felt the need to change the environment, so I transferred to Sanfrecce Hiroshima, but I wasn’t able to change my mentality for a while. However, when I saw the 2010 FIFA World Cup South Africa™ on TV, I noticed many of the players from the Beijing Olympics were playing on the team. That moment became a wakeup call for me, as I thought to myself, “What am I doing?” It made me think, “If they can do it, I can do it too.” The team will be looking for new players after the World Cup, so I set my goal to earn a spot into the senior team of the Japan National Team. It was a moment where I realised that people could change in a matter of a second.

――What do you think about the current U-23 Japan National Team, who is preparing for the Tokyo Olympics?

Lee Back in our days, the players were described as “passionate” and “dedicated,” but I feel like that has now changed to “skilful.” As their generation is known as the "Satori generation," the current players are capable of showcasing their usual performance even at a high stage. I had the opportunity to spend lots of time on and off the pitch with MIYOSHI Koji (Royal Antwerp FC/Belgium) while I was at Yokohama F.Marinos, but he was certainly that type. He is capable of maintaining his composure even after making mistakes, and that can be said for other players like DOAN Ritsu (PSV Eindhoven/Netherlands) and KUBO Takefusa (RCD Mallorca/Spain).

At the Beijing Olympics, our team was constructed by players who were about to go out to the world, but the current U-23 Japan National Team has many players who have already earned plenty of international experiences. Those players are used to playing under pressure and if they can win the first match of the tournament, the home crowd should help them make a deep run at the tournament. If I was playing for this team, I would enter the tournament with a strong intention to score goals in the first match and help the team advance to the knockout stage.

――What message would you like to tell the young players?

Lee This is a life changing event that only comes around once in a lifetime. Only the selected players can play for this Olympics, so I want them to make the most of this experience. I told my former teammate at Urawa Red Diamonds, HASHIOKA Daiki, that “playing the match is just the beginning.” If you cannot leave a mark on the match, the time on the pitch will be wasted. Our failure at the Olympics became a precious learning experience for us, but for the current players, I hope they earn great success that would give great boost to their football career. 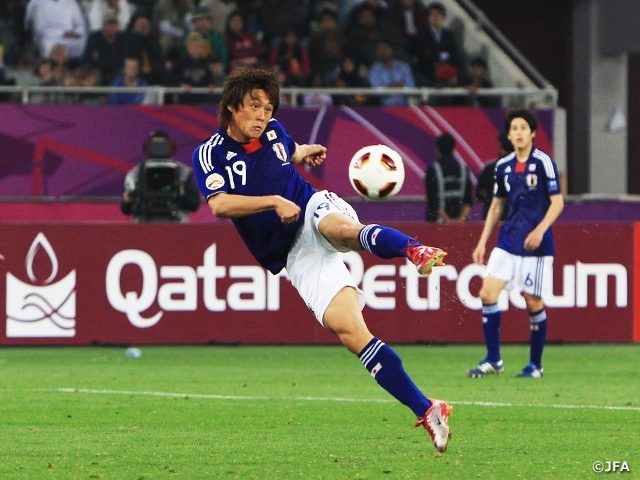 LEE Tadanari
Kyoto Sanga F.C.
Born 19 December 1985/Tokyo
Promoted to FC Tokyo’s top team from the U-18 category in 2004. Following his tenure with Kashiwa Reysol and Sanfrecce Hiroshima, signed with Southampton (England) in 2012. After making his return to Japan, he played for Urawa Red Diamonds and Yokohama F.Marinos, before joining Kyoto Sanga F.C. this season. Selected to the national team at the 2008 Beijing Olympics, while making his senior team debut at the AFC Asian Cup Qatar 2011™, where he scored the game winning goal at the final. 11 caps (two goals) with the senior team.