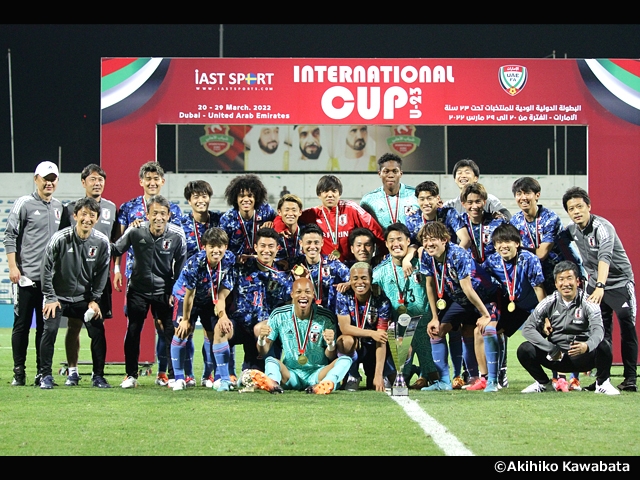 On Tuesday 29 March, the U-21 Japan National Team faced the U-23 Saudi Arabia National Team in the final of the Dubai Cup U-23 held in UAE, where the team won 1-0 to claim the title.

For the team that was launched this year with the aim of competing in the Games of the XXXIII Olympiad (Paris 2024) in two years’ time, this tournament represented their first international competition, as coach OIWA Go mentioned, “This is truly a valuable experience for the players, and that is why we want to focus on winning.”

Although six of their players had to return to Japan after the second match, coach Oiwa remained poised, as he commented, “It is something that could happen when playing for the national team. We just need to work it out with the players we have.” For the final, SASAKI Masato (Kashiwa Reysol) was named as the starting goalkeeper with UCHINO Takashi (Fortuna Dusseldorf), CHASE Anrie (Shoshi High School), NISHIO Ryuya (Cerezo Osaka), and KATO Hijiri (V-Varen Nagasaki) forming the four-man defence line. TANAKA Satoshi (Shonan Bellmare), YAMAMOTO Rihito (Tokyo Verdy), and FUJITA Joel Chima (Yokohama F. Marinos) were placed in the midfield, while SUZUKI Yuito (Shimizu S-Pulse), SAITO Koki (Lommel SK), and HOSOYA Mao (Kashiwa Reysol) were the three attackers upfront. 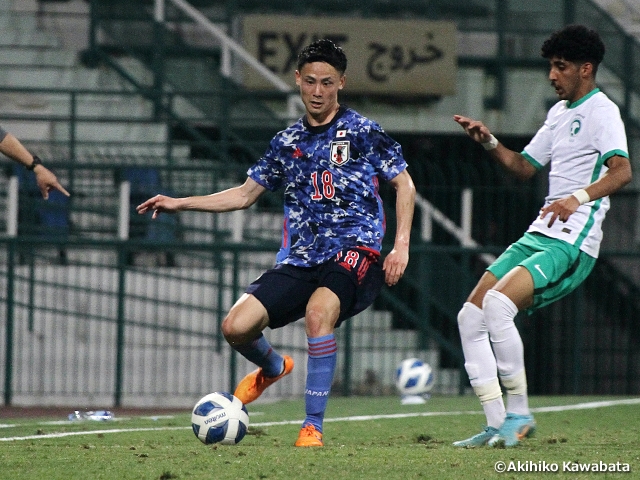 In the previous two matches, the team had started a bit slowly, and the players were aware of the need to increase the intensity level from the start in order to reach a higher level. With the offensive players collectively applying pressure from the front line, Japan took the initiative of the match from the early minutes.

With momentum on their side, Japan scored the opener in the 20th minute, when Hosoya converted the corner kick delivered by Yamamoto, as the striker later reflected, “We have spent a lot of time practising our set pieces during the tournament and to score from a set piece in the last match of the Dubai Cup is really big for us as a team.” 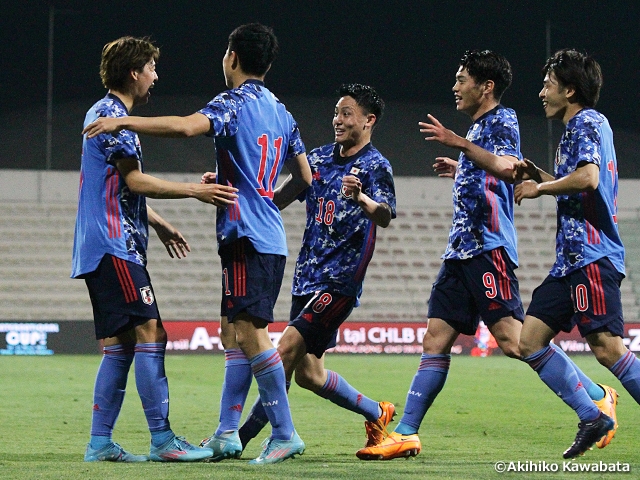 After conceding the lead to Japan, the Saudi side, consisting of players who defeated Japan and Korea Republic on their way to winning the AFC U-19 Championship Indonesia 2018 four years ago, started to rally back, as Fujita later mentioned, “All of the opposing players were very athletic. There were also some very technical and fast players, which made it hard for us to win the ball against them.”

Helped by the dedicated work of the players coming off the bench, the Japanese defence led by Nishio and Chase managed to keep the Saudi offence at bay and win the match 1-0. Despite facing teams from an older category, the U-21 side were able to end their first ever international competition with the best possible result. 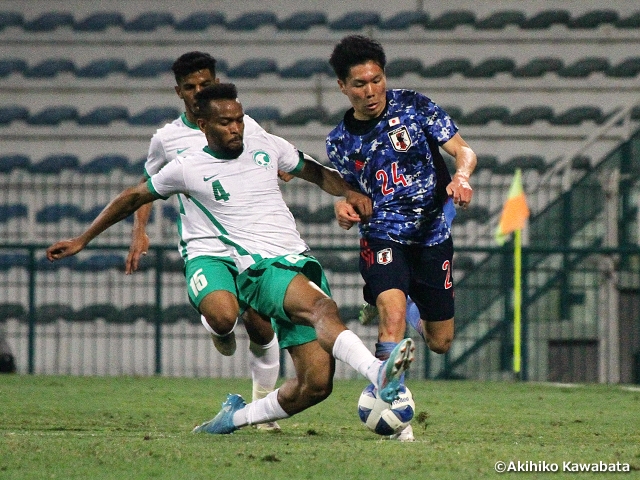 Following the match, coach Oiwa commented, “This was a very productive tournament for us, and we are truly grateful to be given the opportunity to make this tour. I saw nothing but potential from these young athletes.”

OIWA Go, Coach
I think this final has allowed our players to gain plenty of tactical, mental, and physical experiences. Although this team has only been together for a short period of time, this tour has reminded me of the importance of having everyone spending time together and sharing the same routine as a team. It was evident that the team was making forward progress, so this was a very meaningful tournament for us. Winning the title is one thing, but more importantly, being able to compete against our AFC rivals has given us a great learning experience for the future.

DF #27 CHASE Anrie (Shoshi High School)
This was our first international tour. It was frustrating not to be able to play in the first two matches, and things weren't going well for me in practice as well, but I'm glad I was able to play in the last match and finish the final without conceding a goal. The presence of Nishio, who I paired up in today's match, really helped me improve my defensive skills, and reminded me how important it is to defend as a group, as this could not have been achieved if we had played individually.

MF #6 FUJITA Joel Chima (Yokohama F. Marinos)
We are expecting to play more matches against teams and players with great athleticism in the future, so this Dubai Cup has given us a wonderful experience, as well as the opportunity to prepare ourselves for what’s to come. We could have played better matches if we had more time to play our own football, so that is an aspect we must take back and work on once we return to our respective clubs.

FW #11 HOSOYA Mao (Kashiwa Reysol)
We have spent a lot of time practising our set pieces during the tournament and to score from a set piece in the last match of the Dubai Cup is really big for us. Although we managed to enter the match strongly, we ran out of gas towards the end of the match, which allowed our opponents to gain momentum. However, we are proud of the fact that we managed to keep a cleans sheet in all three matches. This was my first time scoring from a set-piece after turning pro, so I am very happy about that.