Coach Moriyasu also announced the squad for the U-21 Japan National Team, who will be entering the Dubai Cup U-23 at UAE from Wednesday 14 November. Among the members selected, midfielders SAITO Mitsuki (Shonan Bellmare) and KUBO Takefusa (Yokohama F・Marinos) were named from the U-19 Japan National Team who recently won their spot into the FIFA U-20 World Cup.

The 23-man roster of the SAMURAI BLUE included MINAMINO Takumi (FC Red Bull Salzburg) who has scored a total of four goals in the three KIRIN CHALLENGE CUP matches played in September and October. Also, midfielders NAKAJIMA Shoya (Portimonense S.C.) and DOAN Ritsu (FC Groningen) who has been named in the starting line-up for all three matches under the Moriyasu-regime continued to feature the roster.

Among those who has played in the recent FIFA World Cup, eight players including OSAKO Yuya (Werder Bremen), SHIBASAKI Gaku (Getafe C.F.), and YOSHIDA Maya (Southampton FC) were named. However, after receiving a surgery in October to cure a pneumothorax in his lungs, defender NAGATOMO Yuto (Galatasaray S.K.) was left out of the roster.

Regarding the two debutants, Suzuki and Yamanaka, Coach Moriyasu explained, “They have been constantly earning minutes at their clubs. Suzuki has really shown his presence upfront while Yamanaka has shown his consistency at a high level.” The coach continued by saying, “I’d like to see how they can perform among this group of players.”

With the AFC Asia Cup awaiting the Japan National Team in January, the team has registered three consecutive wins under the new regime which started in September. The match against Kyrgyz Republic will be the last match for them this year.

Ahead of the two matches, Coach Moriyasu addressed, “We need to play differently according to our opponents. Our ability to make those adjustments will be demanded.” The coach continued by stating, “The match against Kyrgyz Republic will give us something to work on ahead of the Asia Cup.”

The match against the Venezuela National Team will take place on Friday 16 November with a kick-off time at 19:30 at Oita Stadium, while the match against Kyrgyz Republic will kick off at 19:20 on Tuesday 20 at Toyota Stadium in Aichi. 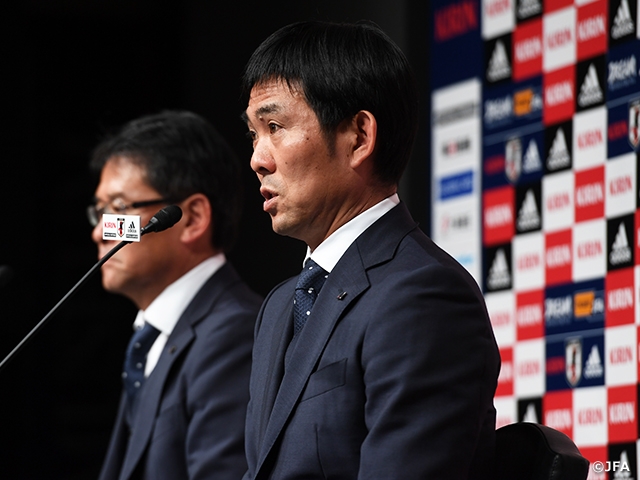 During the same time, the U-21 Japan National Team, who are building their team towards the 2020 Tokyo Olympics, will be participating in a tournament in UAE. Coach YOKOUCHI Akinobu will be the acting coach during the absence of Coach Moriyasu.

Coach Moriyasu has made it clear that, “Everyone must consider the words of Coach Yokouchi as my words,” as he shows his trust towards the assistant coach for both the SAMURAI BLUE and the U-21 Japan National Team.

The 23-man roster for the U-21 Japan National Team featured MIYOSHI Koji (Hokkaido Consadole Sapporo), HASHIOKA Daiki (Urawa Reds), along with those who fought through the AFC U-19 Championship as a member of the U-19 Japan National Team, starting from the team captain Saito, ITO Hiroki (Jubilo Iwata), KOBAYASHI Yuki (Vissel Kobe U-18), TAGAWA Kyosuke (Sagan Tosu), and the 17 year old phenom Kubo. ITO Tatsuya (Hamburger SV), who was a part of the SAMURAI BLUE at the KIRIN CHALLENGE CUP in September was also named in this team.

Coach Moriyasu has stressed the importance to fusion the players among different age categories, as he mentioned, “The experience earned at the top team will be filtered down to the Olympic team. By combining the players of the U-19 category and the Tokyo Olympic generation, the overall level can be heightened.”

In efforts to share the team philosophy among each age category, Coach Moriyasu has brought up AKIBA Tadahiro and Coach SAITO Toshihide to the SAMURAI BLUE from the U-19 and U-16 team respectively. Also, Goalkeeper Coach TAKAKUWA Daijiro and Conditioning Coach OGAI Tomohiro were brought up to the U-21 Japan National Team from the U-16 and U-19 team respectively. The head coach explained this approach, “We must strive to share a mutual understanding, not just among the players, but among the staffs as well.” 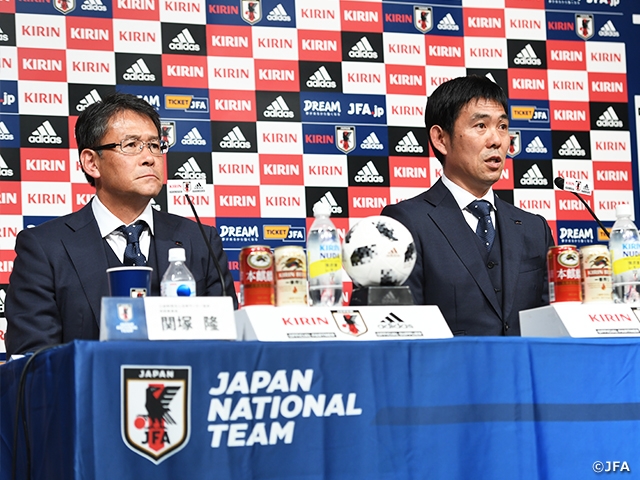 MORIYASU Hajime, Coach of SAMURAI BLUE (Japan National Team)
In our matches against Venezuela and Kyrgyz Republic, we will strive to earn results while seeking to deepen the overall understandings of the team strategies. We will also be looking to heighten the level of the individuals as well. We will be facing a team from Asian and another non-Asian team. It will require our team to make adjustments according to our opponents. I want my players to remain aggressive, but at the same time, I would like them to learn how to break down their opponents and overwhelm the opposing team. It should give us a great opportunity to simulate the matches at the Asia Cup.

With the top team and the U-21 team playing at the same time, Coach Yokouchi will be taking the helm for the U-21 side. I have worked together with Coach Yokouchi for a long time now, and I believe this opportunity will give us a great experience to strive for higher levels. We have continued to create fusions among different age categories, but with ITO Tatsuya, who has played with the top team, joining the UAE tour, while the players who excelled at the AFC U-19 Championship joining the Tokyo Olympic generations, I am looking forward to seeing the chemical reaction among these players.

For the U-21 Japan National Team, it is important that they improve the quality in all aspects. The techniques, decision makings, the battles to win the ball, and their overall intensity level. In order to make use of our strengths in the technical aspects, we must bring up the base level of our intensity and ability to win the ball. That is something we must address to the players of the Tokyo Olympics generation. They have shown a great performance at the Asian Games final against Korea Republic, but I want them to strive for higher levels and continue to challenge themselves at the UAE tour.

SEKIZUKA Takashi, JFA Technical Director
This will be the final two matches ahead of the Asia Cup. The JFA will continue to support the team to achieve one of their goals of winning the Asia Cup. The U-16 and the U-19 Japan National Teams has earned their ticket into the World competitions. We hope to build the foundation for the SAMURAI BLUE from these younger generations and up.