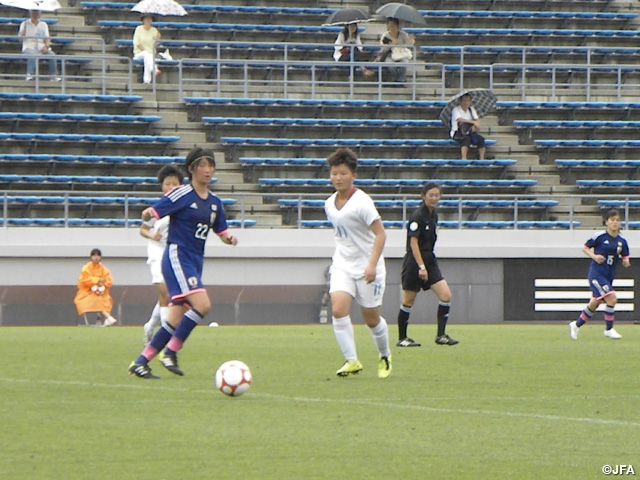 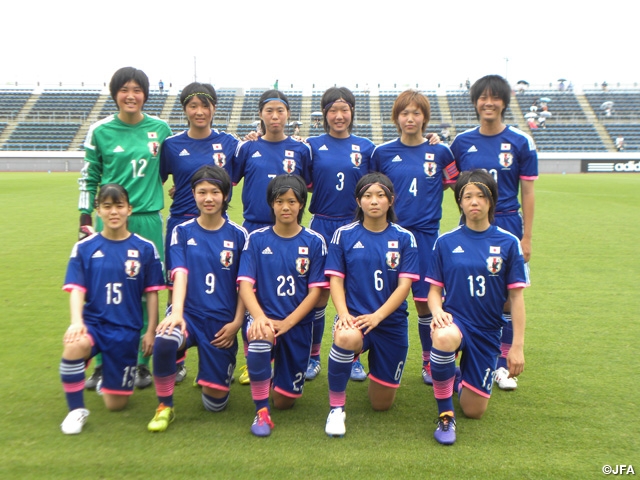 One day after a win over South Korea, Japan national Under-18 team took on Shanghai Under-18 squad.
In a meeting before the match, Japan reflected on their South Korea contest of the previous day that they would have more variety on their offence and have their first defence firmly by watching the video.

Under drizzling rain, Shanghai kicked off the match. Moments into it, Japan attacked on the Shanghai goal. On 6th minute, Nishikawa Ayaka (Tokiwagi Gakuen High School) received a pass before the goal and fired a shot. On 8th, Sugita Hina (Fujieda Junshin High School) also took a shot. Both didn't go into the goal mouth. Japan attempted to get on the scoreboard first afterwards, but struggled to do so with their opponent's solid defence. Yet on 22nd minute, Moriya Miyabi (JFA Academy Fukushima) finally netted one for Japan. Japan allowed Shanghai to tie the contest as the Chinese side brought the ball dribbling from the right side. But Japan retrieved a lead by Kobayashi Rikako's (Tokiwagi Gakuen High) goal to enter halftime with a 2-1 score.
Japan returned to the pitch, having substituted three players, in the latter half. On 48th minute, Kobayashi, who ran up in the right side, penetrated into the box dribbling and passed it to Kobayashi Miku. Kobayashi netted it to give a third goal for Japan. Japan had assault afterwards as they added three more on 54th, 67th and 74th, and posted their second straight win with a 6-1 victory. 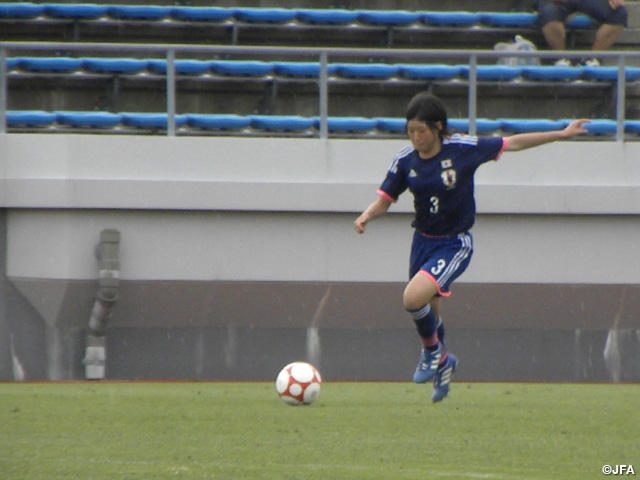 TAKAKURA Asako, Head Coach
Based on the reflections from our first game, we entered the match, trying to elaborate the qualities of our offensive combinations and to adjust to where we want to get the ball defensively. We didn't perfectly have the chemistries we wanted both offensively and defensively, so we would like to take advantage of the distances between our players and change of the pace on our passing. We only have one match to play, but we would like to bring out the strengths of each player.

SUGITA Hina（Fujieda Junshin High School）
We weren't able to place the ball at where wanted it and struggled for much of the first half. Starting in the second half, we gradually became able to improve on that and scored goals from our combinations, so that was good. As our issues, it'll be important for us to speak louder as the entire team and put up bold plays.

OHYA Madoka（JEF United Chiba Ladies U-18）
I got to play as a center back, but struggled with our combination as the defensive line and it gave us a tough time in the first half. In the second half, we corrected on our challenge and cover and line controls, being able to keep our composure. I'm pleased that I could beat opponents with heading plays, which is one of my strengths. Yet I still have a lot of things that I need to work on, and want to raise the qualities of each play.

HATANAKA Miyuka（Speranza FC Osaka Takatsuki）
I came in the match from the second half. We struggled to put up our strengths and didn't have much of voice on the pitch in the first half, so I entered the pitch thinking of trying to speak louder and change the mood. We were told in our pre-game meeting to improve on our defensive linkages and I was playing being aware of it. After all, we were able to have better linkage than in our South Korean match and get the ball in better ways. It's been just four days since we got assembled, but we would like to have more voice with each other and develop our common ideas among our players.

KOJIMA Miku（JFA Academy Fukushima）
I came in the game as a second-half substitute. The defensive midfielder position was something I wasn't fully used to, but I tried to touch the ball as much as I could and rotate it with good tempo as I entered the pitch. After all, I received passes getting in between opponents and created a lot of chances, so that was good. At the same time, I left many issues that I have to look back as well. I felt I would definitely improve on things like positioning as risk management when we are attacking and competing with opponents in the midfield. We still have a couple of more days in our training camp, and I intend to leave here learning a lot of things from my high-level teammates.

NISHIKAWA Ayaka（Tokiwagi Gakuen High School）
It was my first match to play. It was great that we ended up winning, but we couldn't have solution measures against the opponents that were putting their defence during the first half. From our next game on, we want to have better communication and play talking to each other. I found so many issues individually, so I am going to work on those based on the reflections for the next match.