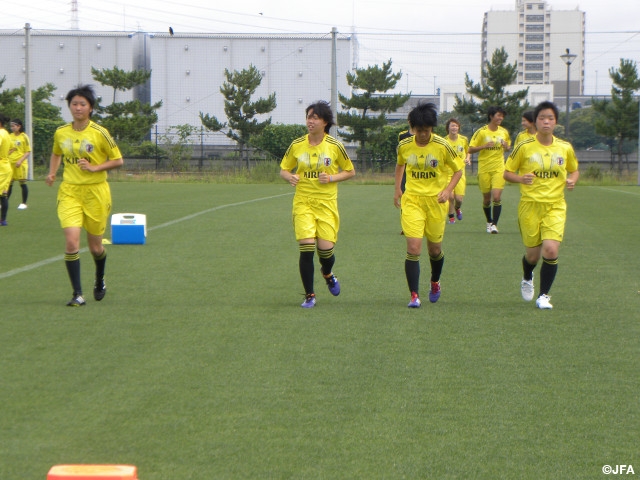 The afternoon session started with some body-core training inside of the facility and then moved onto ice-breaking games on the pitch to relax both mentally and physically. Then the players had 5-on-5 drills and finished the first day with intra-squad matches. 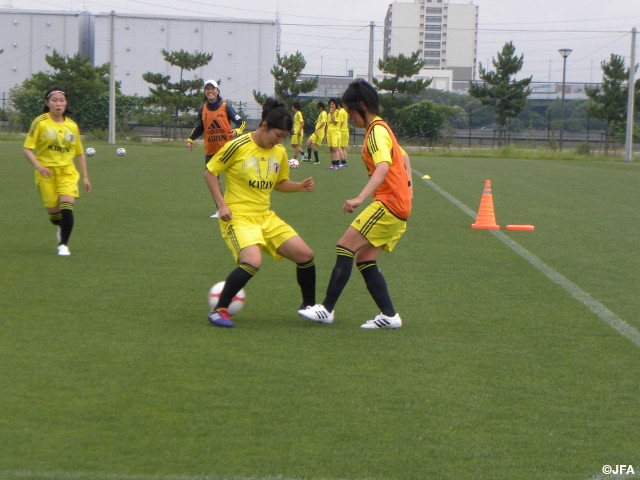 There will be the first match in this tournament against U-18 Korea Women’s Select Team tomorrow 8 July.

KOBAYASHI Rikako（Tokiwagi Gakuen High School）
Today was the first day and there were many girls I met for the first time. But little by little we could start communicating and getting along with each other. This is the U-18 Women’s National Team. I can play at a very high level here, so it’s very inspiring. I will try not to be outplayed by other girls, and I will show what I can do well. Tomorrow we have a match against the Korea Republic select team. We played together only today on this team, but they will be the opponents we will play in the AFC U-19 Women’s Championship. We all will do what we are supposed to do at given positions and we will try to win collectively.

MORIYA Miyabi（JFA Academy Fukushima）
While there were many players I played with for the first time on a same team, I personally could communicate actively with them. We will start playing matches tomorrow. I will try to show my strength. I want to have more and more communication with my teammates and try not to waste this good opportunity by playing hard to the last minute.

FUJITA Suzuka（FC Kibi International University Charme）
This time there are so many players I have never played with before, so I tried to take time to establish good communication with them. I talked with them very actively about every single play. During the goalkeeper drills, there were some mistakes I made when I tried to do something, but I could correct them later. It was good that I could have both challenging and adjusting. Tomorrow we will play against Korea Republic. As we will try to win the match as one united team, I will actively talk to my teammates and get involved in build-ups.

MIZUTANI Yuki（JFA Academy Fukushima）
It made me very nervous to play among the best girls selected out of many players. But at the same time, it was fun to play with those talented girls at a very high level. This is a great opportunity to play against players whom we will eventually play against in the AFC Championship, so I don’t want to miss it and we want to win at all cost. Also me individually, I want to show what I can do well and appeal to my coaches so that I will get selected onto U-19 and U-20 teams.
ASANO Natsumi（JFA Academy Fukushima）
On this U-18 Women’s National Team, there are many older players than I am, and this is my first time to play with most of them. Today was the first day and I was a little nervous, but as the practice went on, I got more and more comfortable. I could show what I could do. Starting tomorrow we will have three matches in three days. I will do good preparation and try to play aggressively.

MIURA Narumi（Nippon TV Menina）
We had an intra-squad match at the end of the afternoon practice, but I couldn’t play it out with all my energy and I couldn’t play my style. But we just started playing with this team, so starting from tomorrow, I will play my style and show what I can do. During these six days I will learn a lot on and off the pitch and take advantage of this opportunity.