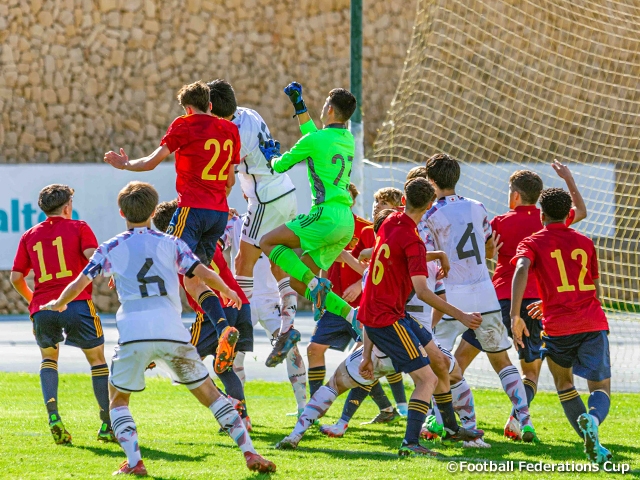 On Friday 25 November, the U-15 Japan National Team, who are currently on a tour in Spain, played their second match of the Football Federations Cup against the U-15 Spain National Team.

The match saw Japan create an early opportunity in the 10th minute, when KOURA Takumi sent a long ball to ELCHETABU Bright Kai. Although this ball was intercepted by the opponents, KAWASAKI Kanta responded to the loose ball to strike a shot, but his attempt sailed over the cross bar. In the 22nd minute, SAKAI Shunya delivered the ball to the left side, where OSA Ryuki carried the ball towards the goal and struck a shot, but his effort was denied by the goalkeeper.

Following a scoreless first half, Japan continued to press forward to create chances. In the 59th minute, DOI Yuji received a pass from NAKAYAMA Shion before firing a shot, but the Spanish goalkeeper made a fine save to keep the clean sheet intact. After both sides fell short from scoring a goal, the match entered a penalty shootout, where Spain won 3-1. 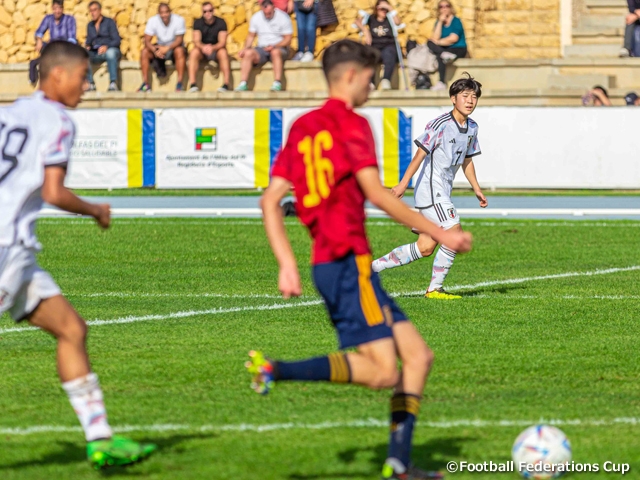 DF #15 SASAKI Shoei (FC Tokyo U-15 Fukagawa)
It's very disappointing that we didn't win this match. We need to work toward becoming a stronger team because a strong team will always find a way to win, whether it is through penalties or any other means. Personally, I thought I wasn't managing the risks well and made mistakes in our build-ups. I also felt unprepared when I didn't have the ball, so I need to be more mindful in those areas. We still have one match remaining, so we want to improve ourselves both as a team and as individuals to finish this tour on a high note.

MF #17 KAWASAKI Kanta (Hokkaido Consadole Sapporo U-15)
It was a very difficult match since we gave our opponents a lot of time with the ball. Although it is really upsetting that we lost this match, I believe we learned a valuable lesson as a team and as individuals. I believed that my approach to the ball was too passive and that I needed to participate more actively in the team's offence. As a team, we'll work to win our next match, and I'll do everything in my power to support the team.

FW #19 ELCHETABU Bright Kai (Yokohama F.Marinos Youth)
We played well as a team, but lost in penalties, so now we need to talk and support one another to get back on our feet. I only got to play in the first half, but I was unable to take a single shot, so as a forward I will try to do a better job in our next match to demand the ball and be more aggressive to earn results. This match also reminded me that I need to become a player that can change the dynamics of the match when things aren’t going our way.