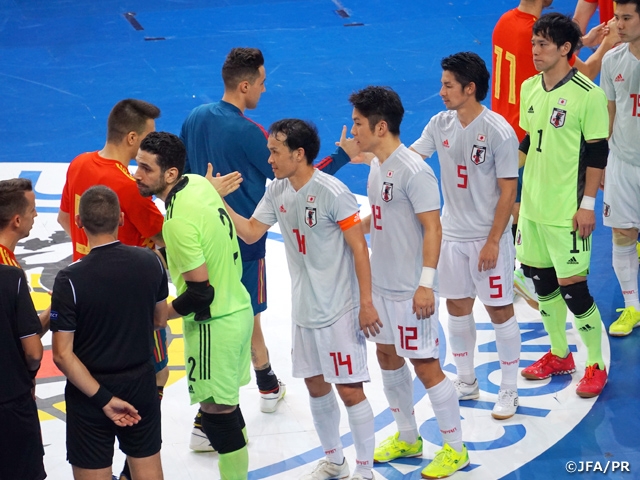 Following their 0-3 defeat on the day before, Japan’s coach Bruno GARCIA told his players, “Let’s give 120% on the pitch and play until the final whistle. We should be able to showcase a better performance than yesterday.” The starting line-up featured the same members from the previous match, as SEKIGUCHI Yushi, ANDO Ryohei, HIRATA Neto Antonio Massanori, KATO Minami, and NISHITANI Ryosuke took the court.

The match started with Japan taking the first shot, as Nishitani followed up a turnover and strike a shot in the first minute. The first goal, however, went to Spain, as their pivot made a sharp turn before striking a shot past Japanese goalkeeper Sekiguchi in the second minute. With Spain applying aggressive pressure form the frontline, Japan conceded multiple goals, despite the big saves made by Sekiguchi. Through their dominating performance, Spain took a four goal lead into halftime. 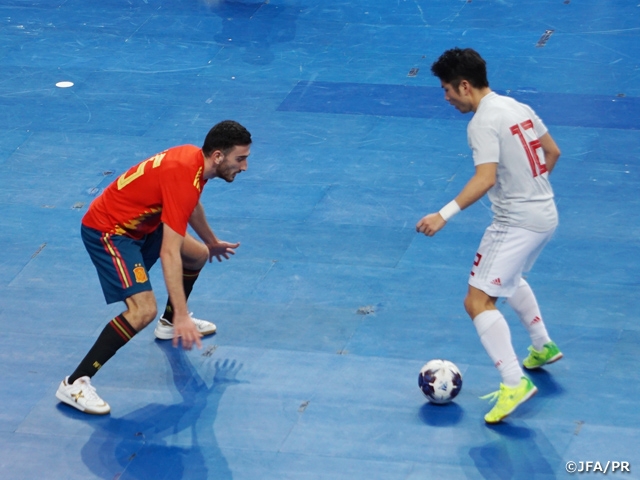 Spain continued to showcase their dominance in the second half, as they struck their fifth goal in the 23rd minute. In efforts to close down the gap, Japan picked up their pace to create more opportunities upfront. Japan’s first goal came in the 25th minute, when UCHIMURA Shunta struck a shot between the goalkeeper’s legs. Following this goal, Japan started to show positive momentum to threaten the Spanish goal but struggled to find ways to get the ball past the opposing goalkeeper. After Spain added another goal from a set-piece, Japan initiated their power-play by bringing in MINAMOTO Akira onto the pitch but ended up conceding multiple goals towards the end of the match to finish with a score of 1-9. 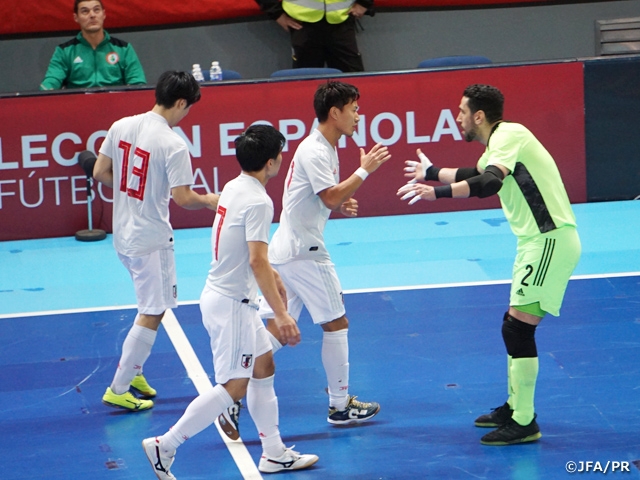 GK #1 SEKIGUCHI Yushi (Nagoya Oceans)
We weren’t able to adjust against our opponent’s pressure and failed to showcase our usual performance. As the final score suggests, this was a complete loss. Although we have limited time ahead of next year’s AFC Futsal Championship, we must make the necessary adjustments so that we will not play a game like this ever again. We must stay eager to earn positive results so that we don’t repeat the experience we suffered four years ago.

FP #5 MINAMOTO Akira (Tachikawa/Fuchu Athletic F.C.)
In the first match, our team struggled to adjust to the referee’s foul calls and restricted ourselves after committing five fouls in the early minutes of the match. For that reason, we made the adjustment to reduce our fouls in the second match, but that approach allowed our opponents to play freely in the open space. As the scores suggest, our opponent showcased their superiority over us through the two matches. However, we must learn from these losses. The next time we face them will be at the World Cup. We hope to work hard so that we can close down the gap before facing them again.

FP #7 ANDO Ryohei (Nagoya Oceans)
We weren’t able to earn the desired result in both matches and I personally wasn’t able to hold off the opposing pivot, so this tour turned out to be a very bitter experience for us. However, we us accept the results and move forward with a sense of urgency.