In preparation for the AFC U-19 Championship 2020 Qualification, the U-18 Japan National Team held training sessions on Tuesday 29 and Wednesday 30 October, before playing a training match against Ryutsu Keizai University on Thursday 31. The training match lasted for two hours, as they played 30 minutes per quarter, where the U-18 Japan National Team won 5-0.

Despite being in the midst of the Kanto University League season, Ryutsu Keizai University brought their top team for this training match. The match started with the university side taking the initiative, as they created close opportunities in the early minutes. However, led by the goalkeeper KOKUBO Leobrian, the national team showed great persistency to keep the clean sheet intact. With the national team gradually picking up their pace, the opening goal came in the 14th minute, when midfielder AYUKAWA Shun broke through the left side before sending a cross towards the middle. TAKEDA Hidetoshi was there to head the ball back in the mix, allowing SOMENO Itsuki to strike the ball into the net. Midfielder MATSUMOTO Nagi followed in the 24th minute, as he fired a powerful shot from distance to double the lead for the national team. Two minutes later, striker SAKURAGAWA Soromon responded to a delivery from KATO Hijiri to score the team’s third goal, as the first quarter ended with the national side leading 3-0. 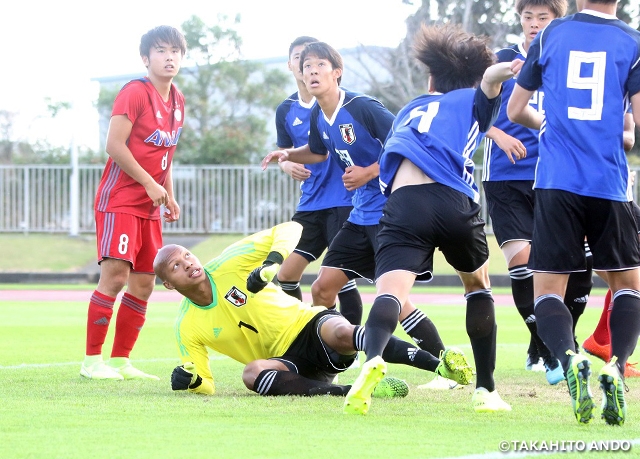 In efforts to finish the training match on a high note, the national side showcased great aggression in the fourth quarter. In the 95th minute, forward HARUYAMA Misaki broke through the opposing defence line to score a goal, making the final tally 5-0 for the national team.

Ahead of the AFC U-19 Championship 2020 Qualification, the U-18 Japan National Team will now travel to Ho Chi Minh City, Vietnam. The team’s first match will be against the U-18 Guam National Team on Wednesday 6 November at 16:00. 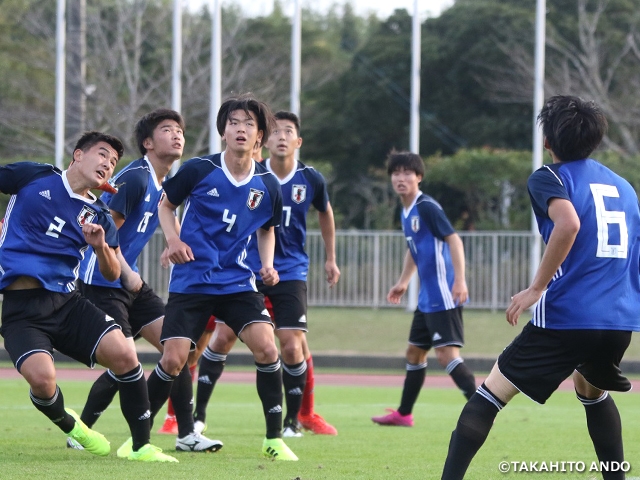 DF #14 KATO Hijiri (JFA Academy Fukushima U18)
I am so happy to be a part of this squad for the AFC U-19 Championship 2020 Qualification. In today’s training match, our goal was to put up a good fight in the physical battles against university players and to outrun our opponent. Although we showcased great aggression in offence, we allowed our opponent to exploit our defence line in many occasions, so we still have plenty of work to do as a team. Once we arrive in Vietnam, we will work on those tasks and strive to improve ourselves ahead of our match against Guam.

MF #21 ISHIURA Taiga (Tokyo Verdy Youth)
I am grateful to be a part of this team, and I hope to play with responsibility and confidence in our matches. In today’s training match, I wasn’t able to get myself involved in our team’s goals. As a team, we had to play with more composure to possess the ball, especially when the game picked up the pace. We will work on those aspects once we arrive in Vietnam. I hope to showcase everything I have worked on and see how I cope against the opponents in Asia.

FW #18 OMORI Shingo (Juntendo University)
Following our tour to Spain in September, I am honoured to be a part of this team for the AFC U-19 Championship 2020 Qualification. I am glad that we were able to keep a clean sheet in today’s training match, but we still saw plenty of room for improvements, so we hope to make the necessary adjustments ahead of the tournament. There will certainly be difficulties playing in the Asian qualifiers, but we hope to prepare ourselves well and strive to win three consecutive matches.