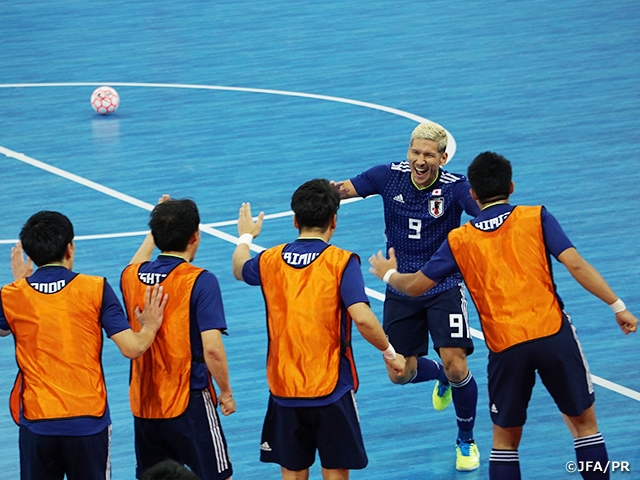 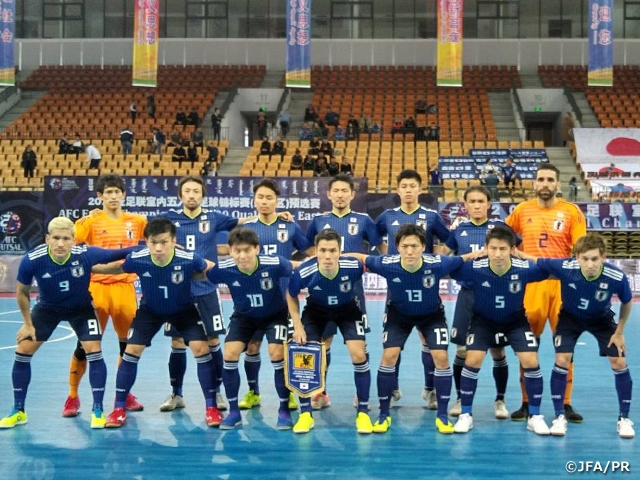 Seven teams from Eastern Asia (Chinese Taipei, China PR, Mongolia, Hong Kong, Japan, Korea Republic, Macau) will compete at this qualifier held in Ordos City, China PR, where the teams will be divided into two groups. The group leaders will automatically qualify, while the two runners-up will play a one-match playoff for the third seat for the main tournament scheduled to take place at Turkmenistan in February.

Ahead of the match, coach Bruno GARCIA sent off his players by mentioning, “Regardless of who we face, we must take control of the ball possession, dominate the opponent, and showcase our style of futsal. We must fight in behalf of all of our fans and supporters.”

Japan’s starting line-up featured PIRES Higor in goal, with HOSHI Shota, NIBUYA Kazuhiro, ANDO Ryohei, and YOSHIKAWA Tomoki playing in the field. Japan took full control of the match from the very beginning, as Hoshi scored the opening goal in the first minute, followed by Yoshikawa’s goal in the second minute. Despite conceding a goal to Macau from a penalty kick in the seventh minute, Japan maintained their composure to keep the pressure on. With players like MORIMURA Takashi and KATO Minami scoring goals off the bench, Japan entered halftime with a commanding lead of 10-1.

Japan continued to show their dominance in the second half, as Yoshikawa restarted the scoring in the first minute of the half. After Macau marked their second goal of the match from a free kick, NISHITANI Ryosuke responded right back with a goal. Japan went onto another goal spree in the second half, as Hoshi, Murota, and Kato all marked a hat-trick in a 17-2 victory over Macau. 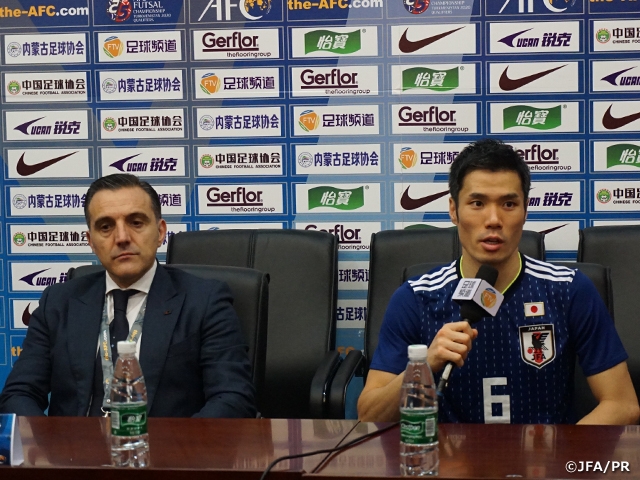 Bruno GARCIA, Coach
Although this was our first match of the tournament, we were able to showcase a good performance today. However, this is just one match, and we must reset our minds ahead of our next match against Korea Republic. The first match of the tournament is always difficult, but our players managed to keep their focus and execute our game plan with perfection. We must not forget that many people have travelled long ways to support us and cheer for us at this arena. We would like to give a special salute to those who are here with us. Ahead of our next match against Korea Republic, we will resume our trainings tomorrow and prepare ourselves in the best way possible.

FP #3 MUROTA Yuki (Pescadola Machida)
The Eastern Asia qualifier has finally started, and we were able to get off to a good start with a 17-2 victory over the Macau Futsal National Team. Many supporters came from Japan and they gave us great energy to earn this result. Personally, I am glad that I was able to score a hattrick. I will continue to work hard so that I can help the team win in our next match against Korea Republic.

FP #11 HOSHI Shota (Nagoya Oceans)
Prior to the match, we spoke as a team that we wanted to showcase our dominance over Macau in this match, and I feel like we were able to do just that. In order to display our best performance, we all played with great concentration on the pitch, while staying vocal on the bench. We will be facing a totally different team in our next match, so we will reset our minds and prepare to give ourselves the best chance to win the match.

FP #13 KATO Minami (Shriker Osaka)
Although I have played in numbers of international matches with the Japan Futsal National Team, this was my first official AFC match. I was able to enter the match without getting too nervous and managed to showcase my usual performance, but still failed to capitalise on some of the opportunities I had to score, so I will try to do a better job in our match against Korea Republic. I haven’t played against Korea Republic before, but I am sure it will be a tough match. I hope to give my utmost efforts to contribute to the team’s victory.

FP #14 NISHITANI Ryosuke (Nagoya Oceans)
We managed to apply pressure against our opponent throughout the match and we were able to get off to a great start. This is a result of our team maintaining great intensity, concentration, and communication. We will continue to give our best efforts to showcase our colour, so please continue to cheer for us.